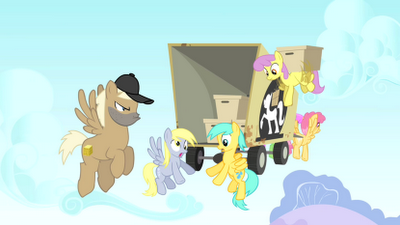 Some days I think everyone feels a little "Derpy" - a little weird, a little crazy, a little "I just don't know what went wrong."    I can't say that today necessarily was a day like that, but I had one of those days last week when I was trying to explain something to someone at work.

In reality, what I had said was wrong, but for some reason I couldn't spit it out and said, "No, I'm right and you're wrong, I mean, you're wrong and I'm right...you're wrong...I'm right...no, no, I mean...ARGGGG!  You're right...ah, FINALLY!"  Heh heh heh.  The co-worker I said this to I think got a kick out of it, but I felt rather bad because I just couldn't say what I meant!

This morning I got up and it's a beautiful day.  I haven't had a day off in a week, so it's especially nice to open up the house and just enjoy the beautiful weather, the breeze, the birds singing...well, you get the point.  I spent a little time this morning forming "the plan" for today.

Then I thew that out the window and went over to Walmart to pick up a blind bag pony in which to paint as Derpy Hooves.  It used to be quite simple to pick up every single one of the ponies in the set (see one of my previous blogs for more info).  However, today when I went the numbering system had mysteriously disappeared and I had to resort to feeling the packaging until I got a pegasus.  Luckily they are the only really easy ones to feel because they have the extra appendages and somehow I ended up with Fluttershy.

After picking up a Venti mocha with a shot of coconut from Starbucks, I headed on home, did something on my original plan which was remove the rest of the caulk from around the tub in my second bathroom (just a small piece of advice from me to you, if you don't have someone to clean your bathrooms with you or for you and you're looking for a house, get 1 1/2 baths, NOT 2 1/2 baths... two tubs is one too many). 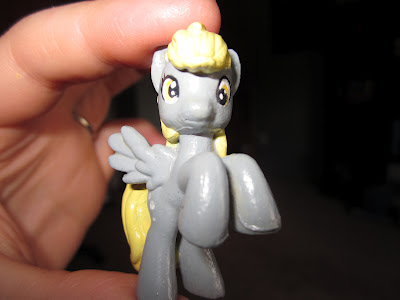 Then after a good clean down of the tub (gotta get all that nasty mold/mildew out from behind the old caulk you know) I started on my Derpy Repaint.  It was hard at first to paint over Fluttershy since she's tied for first as Best Pony...but I already have two Fluttershy minis, so I got over it pretty quick.

As I worked on painting Derpy today, I was thinking about the fact that there are so many people who do custom jobs of ponies.  They make characters from the series (like Derpy) and they also make lots of OCs (original characters).  They make fanfiction characters and self-portrait ponies.  As I was painting Derpy I realized I really don't have a self-portrait pony myself because I think I'd probably be cutie-mark-less.  And, quite frankly, that's kind of boring.

But another reason there are so many custom ponies I think, and I've seen table-top gaming figures turned into ponies (like Warhammer 40K figures) is that many of the fans of the series are gamers, otaku and sci-fi geeks who are all into being creative.  What little I know about painting in miniature, I learned from painting 40K figures back in the day myself.  Of course, I also know that how I've been doing them isn't nearly as high-quality as I used to do with my 40K figures because the paint was much higher quality and I think if I were to start doing custom paint jobs for anyone but myself (and I would consider it) I'd probably go buy model paint instead of craft paint. 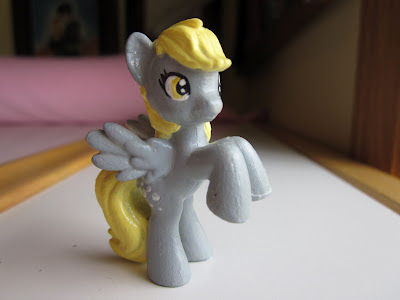 Derpy took a couple hours to do, including dry-time.  Basically I covered her in a couple of layers of gray, then colored her mane and tail in quite a few layers of light yellow, then painted her eyes white (which were surprisingly easier to paint than I'd thought they'd be) and did the yellow, black and white outlines, then finished off with her bubble cutie mark.  Put on a clear varnish which, unfortunately, made her look more lumpy than I would have liked...guess I should have just put a spray varnish on her, but I was afraid she'd drip if I'd do that.  Overall though, seeing as though she's only around 2 inches tall, I think I did a pretty good job on this repaint.  I didn't even paint Celestia's eyes when I did her, so this is a step up.

And now...I guess I should go back and work on my list of things to do...which means getting back to caulking.  ^_^;  It's such a nice day though that I might just wait on that for awhile longer...

Posted by Milly Thompson at 1:45 PM No comments: