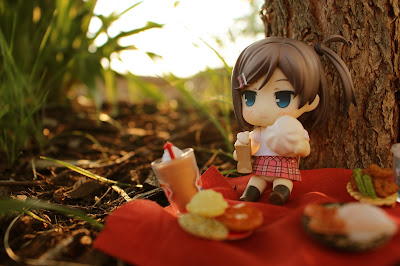 After seeing so many different figure photos over the last months, and even videos and blogs, I finally decided that it might be fun to do a photo shoot with a few of my Nendroids.  For those of you who aren't anime fans or collectors, a Nendroid is poseable figure made/distributed by the GoodSmile Company in Japan.  There are literally hundreds of these chibi figures from all sorts of anime, manga and even video game/phone app games.  My favorites are from anime that I've seen.

Look who's arrived carrying goodies! It's Menma! She's from the series "Ano Hana" (it's shortened from a longer title but I won't bore you with details.) 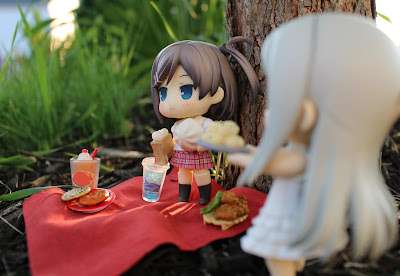 If you haven't seen either series I won't spoil the details, I just liked how both Nendroids have food items that they come with. I have a collection of them actually, and most of the time they sit in the case having something of a picnic anyway, so it worked out to set them outside to continue the picnic there! 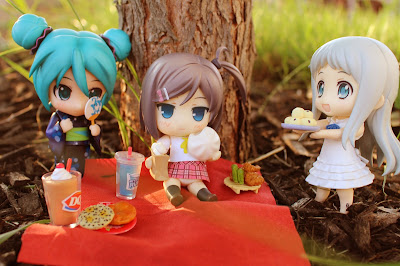 Look who's hiding from the camera!  It's Hatsune Miku!  She's a bit embarrassed she's the only one who showed up in a yukata.  She's ready for the matsuri (festival) that evening and the fireworks that are to come afterwards!  Tsukiko and Menma don't really mind though, and Menma is excited to share her treats with her new friend too.

I had a good time taking these photos even though I'm sure my neighbors probably thought I was crazy lying on my belly taking photos of figures in my backyard.  Maybe no one saw...  Heh heh.  The little red cloth came out of my fabric collection and as you can see, some of the drinks I forgot to blur out the logos...oops, they apparently went to Dairy Queen before the picnic!  Don't think they have those in Japan...  oh well.  I was mostly playing with angles to best cover up the pins and various things that I used to hold figures upright!

Playing with coloration and contrast was also a priority in these photos for once.  Normally I don't touch them up so much, but it was fun making them look more like they were having the picnic at sunset and so I turned up the red a tad.

The next picnic is actually from a single series, Wooser's Hand to Mouth Life.  These Nendroids were a purchase by my husband, but with my food stuffs.  Since the series is about the little yellow rabbit-looking thing, the next photo actually focuses on him rather than the Nendroid Rin that he came with. 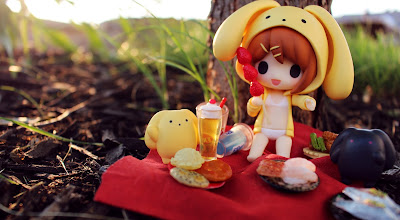 Feel free to use this one as a desktop if you like.  I like this photo a lot.  The fact that I had a miniature beer just felt right with all of the sushi and Rin and Darth Wooser just hanging out with him as he's partying at sunset. 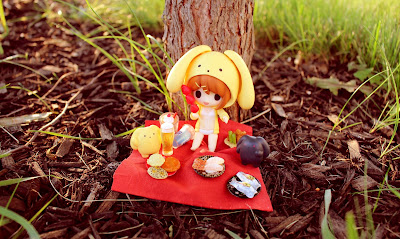 This photo gives you a bit more of an 'overall' look at the scene that I'd set up.  It's at the base of a smallish tree in my yard that I've mulched around.  The grass is a wee bit long so I tried to zoom in on most of the photos so you didn't see the scale of these figures as much.  I tend to get distracted by things like that when I'm looking at figure photography.  In this case, I just wanted a good overall shot so I could play with color and also see the way the sun was crawling across the ground as it was starting to set.  It's a rather warm and happy picture I think. 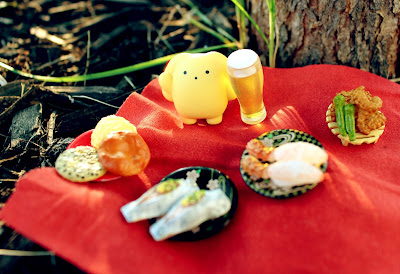 The final photo I played a LOT more with contrast and color balance.  Wooser is just hanging out by himself because he just wants to be alone with his food!  The sun coming through the beer makes it almost look real.

I hope you like my little photo album of the Nendroid picnic!  I have one more to share with Menma and Tsukiko, but it was from a different angle so it looked a bit out of place in the 'story'. 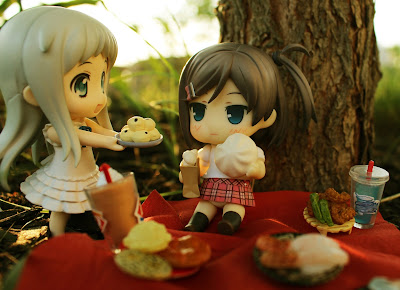 As you can see, Menma came in from a different angle in this one but I liked the darker color, they're just a wee bit more subdued.  Tsukiko looks un-impressed by Menma's cooking!  These two are my favorite Nendroids so I liked being able to play around with them today.  Hopefully I can eventually do other photoshoots like this in the future!
Posted by Milly Thompson at 9:06 PM No comments: