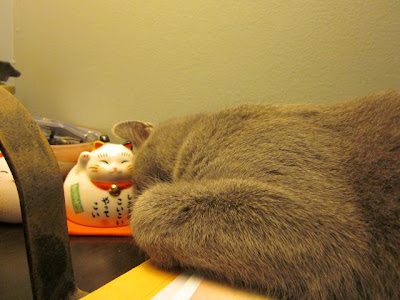 I wish I could just lay down anywhere I pleased and take a nap, but I can't.  In fact, the only time I nap is when I'm sick and I really just can't get up to do much of anything else.  Even when I was a baby my mother told me that I wouldn't fall asleep in cars, wouldn't take afternoon naps and I would fight and fuss to be put down at night.  What's weird is that I LIKE to sleep now, but not naps.  I feel weird after taking a nap.  But it would be handy to do it, much like Olivia who can settle down pretty much wherever.

Lately my mind has been filled with too many things.  Work, making things for Tsubasacon, working on publications, balancing all of the artists that I've got coming, trying to get a cosplay going (for those of you who don't know it's "costume-play" shortened which means I am planning on dressing up as something else and not for Halloween) and finally there's house guests and keeping things tidy so I don't have a huge enormous mess to return home to when all of the conventions and guests and 'fun' is done and over with.

I knew what I was getting into when I signed up for all of this.  At first it wasn't too bad, Tsubasacon work is basically just a passive thing during most of the year, and then it kicks into high-gear about August or September when guests start calling off and programs need to be written, badges need to be laminated (I'll probably get off of that this year since I'll be working) and this year merchandise needed to be made, displayed and sold.  I'm currently making a bunch of different kinds of jewelry and buttons for the table: 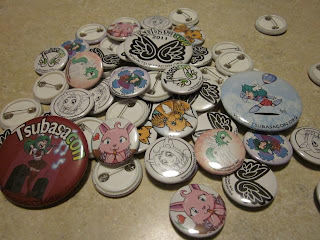 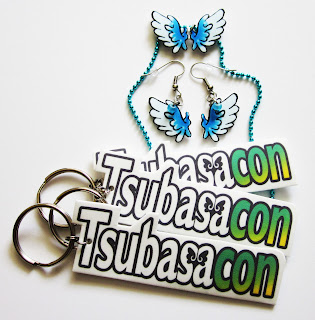 There is this little problem with having to share the table's credit with someone else.  See, it's kind of weird but we've got a guy who's a bit too...gung-ho about everything, and I mean everything.  He started off as merely a volunteer who said, okay, I'll do advertising.  Hundreds of dollars later, we couldn't understand why he was sending fliers to Canada.  Okay, we'd really like to have a fan-base in Canada, but we're talking West Virginia here... Most people think WV has some kind of strange stigma attached to it that siblings marry and everyone is overweight (thanks to Jamie Oliver who visited Huntington a couple of years ago..which is where the convention is being held, btw).  So, we tried to ask him to maybe scale it back a bit.  He mysteriously had to work on the day of the convention last year, so we thought maybe he didn't know how to scale it back.  Either all or nothing, perhaps?

So when he came back we thought maybe we should put him on merchandise, and then suddenly realized that if we gave him the reigns to that little gem (or should I say funds) he might go overboard again and so I've been working on the table stuff.  But it's a LOT of work.  Button making requires skill at artwork and also layout, then printing, cutting, punching, etc.  Voila!  And that's just for the buttons, little lone the keychains, earrings, necklaces, bumper stickers (thank goodness I didn't have to design something) and t-shirts (I did, but last year, so I didn't have to do it again this year)...  Oh and wing head-pieces.

PLUS I had to get the program together without anyone voluntarily sending me their information.  There's nothing like telling everyone at a meeting to please send me your stuff, then having to email them multiple times over the next week to actually get them to send it.  And then finding out that there was stuff I didn't even get in there since people changed their minds at the last minute after it went to print.  Ahhhh... oh little maneki neko cupu on my desk, give me good luck in these trying times!

By the way, the little maneki neko on my desk says "shiawase koikoi yatte koi".  It means:  Happiness come come, do come!

Maybe a little sleep is in order.
Posted by Milly Thompson at 10:39 PM No comments: 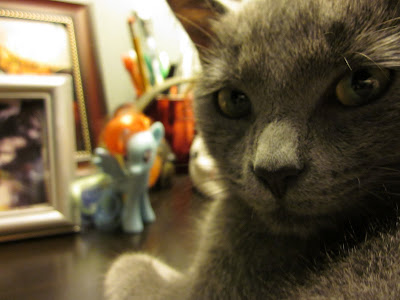 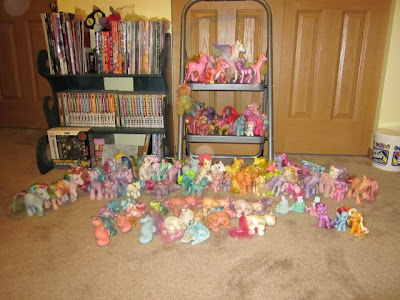