My Life With Anime Figures - Part 5 (The Rest) 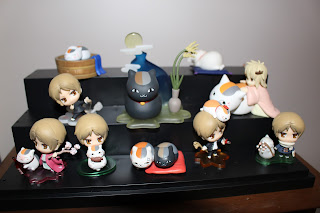 I'm a little later on writing this blog than I had hoped; especially seeing as though it's been months since I wrote part 4.  I keep saying that life gets in the way, but I think the truth is I just wore myself out and now that it's getting hot for the summer it's harder to sit at my computer for hours in a row working at editing photos and writing paragraphs about them.  I suppose I really could just post photos, but again, I'm tired of editing, so the post today is going to have a handful of quickly snapped photos from a lazy collector!

Today's blog finishes out the five-part series of the anime figurines in my life.  Do you collect figures?  If you do, I'm sure you've seen the full range of ridiculously expensive to cheap and bootleg figures.  I've talked about a bit of all of them in this series, and there's plenty of videos out there about figures just like mine.  I don't do un-boxing vids or write about the ways to point out bootlegs all that much, but if that's your cup of tea, feel free to Google them.  My blog today is just a show-off of the range of figures that come from various series that I've seen and liked over the years.

Our first picture is a collection of miniature figures from Natsume's Book of Friends.  I have a larger scale figure of Neko-Sensei, but I don't have it pictured here as he's in a different room.  I liked the look of these figures in the display as they kind of look like a bunch of little dolls.  I'd started watching Natsume probably eight or more years ago, and then started collecting the manga and later figures.  Strangely enough the anime has been re-made and has various incarnations now and you can find merchandise for the series currently. 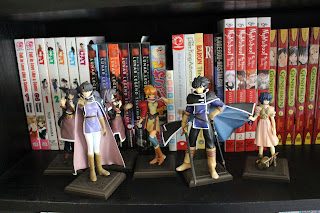 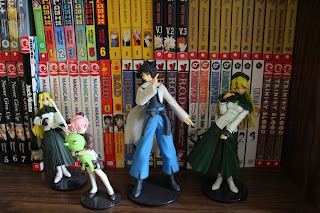 The figures to the left are actually inherited through my husband from Scrapped Princess.  For a time during the 2006-2009 period many DVDs came with special figures when you purchased the anime.  (This covers the Read Or Die figures below as well).  I'm still surprised that they were making so much money on these DVD sets that they were able to give away figures along with them.  Once in awhile you can still find sets like this, but nothing like they were back before the Recession.  Anime DVDs peaked at this time period as there were large sections of them in stores and you could get anime just about anywhere that they sold DVDs and VHS.  Series that had multiple releases would come with these figures that you could collect.  The Scrapped Princess figures actually had two much larger scale figures that I don't have posted here as I didn't want to get them down off the high bookshelf.  We also had figures from Last Exile and Death Note that came like this, but I didn't search them out to take pictures this time around.  There were others at the time but we skipped out on some of them in order to get the entire DVD sets without the figures included. 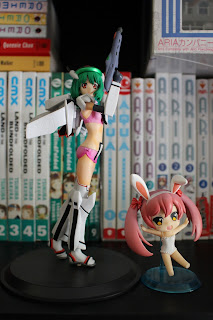 This pairing to the right is a bit strange because they don't come from the same series - I just have them together because I felt like it.  Ranka Lee is from Macross Frontier which is a series that never came over in DVD form.  In fact, most of the Macross world has never been released in English due to some strange licencing issues, companies that bought it and never released it.  I'm sure you could look it up if you were interested to know more.

Both figures are good examples of cheaper figures that you can find that are still of decent quality.  Ranka cost around $30, and the bunny girl cost around $15.  It's not unusual to find figures of series in swimsuits and outfits that aren't the norm in the series, so it's fun to find ones that are decent quality and make you remember parts of the show you like. 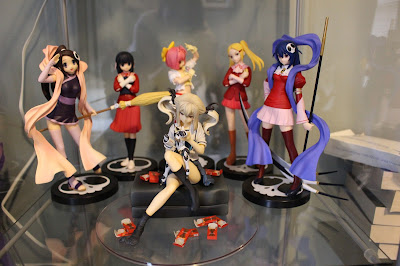 Another mix-match of series in this case.  These figures reside at the moment in my husband's cabinets and are from Robotic Notes (the girl in front) and World God Only Knows in the back.  I like this grouping because it gives you a good juxtaposition between more expensive figures and the cheaper figures you can find.  You scan see the level of detail changes a whole lot between our girl in the front and the girls in the back.  We got the World God Only Knows figures for about $35 a piece, and over $100 for the other.  She has a handful of little Pocky box accessories that are pretty cool and you can arrange her in various ways, whereas the girls in the back are stationary and have no extra bits. 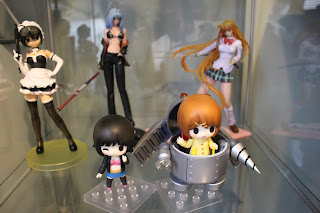 More randomness coming out of the display cabinet!  Nendroids and scale figures range in the $30-$50 range here.  The Tengo Tenge figures were sold in blister box, and the He is My Master was just a box figure.  Some sold around the same time of this series had soft parts so you could 'feel' them up (yeah, weird, but we do have one figure with soft parts).  The Nendroids in the front are just side characters with Wooser in his mini-series.  In another photo later you'll see them again but I've been playing with the Nendroids and they have other faces. 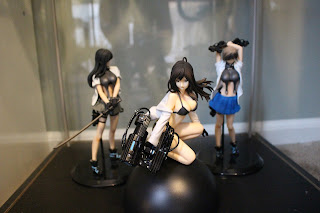 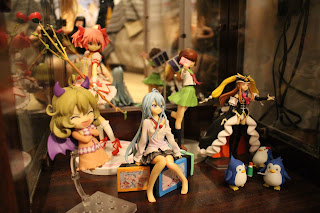 More inexpensive figures, this time from Gantz.  My husband likes this series a lot - okay, can you blame him? Most guys do because it's got girls who wear skimpy outfits and fight with huge, futuristic guns.  The series is interesting but super bloody and has a manga, an anime and even a couple live action movies.  The figure in the front cost a bit more than the figures in the background and you can see a distinct quality change with how much more detailed her gun and hair is, the shape of her body and the way her shirt comes off of her shoulder.  She also comes with a bit of the orb that they get their guns from in the series.

Switching display cases now here's some more random stuff that I liked.  Can you name the series?  Madoka is probably the most noticeable.  Then two characters from Penguin Drum, Denpa Onna to Seishun Otoko, and Sasami-San @ Ganbaranai.

As I said, random.  The types of figures range from two in the back are crane-type prize figures, a scale figure, a Nendroid and a Figma. 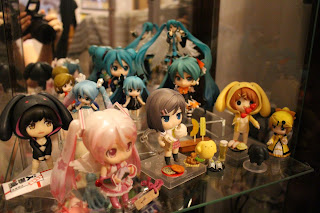 Cuteness explosion shelves!  Again, didn't feel like sorting these out for individual photos and am not using a great photo, but you get the idea.  These Nendroids are having a picnic.  You'll see some creative licensing with one of the Woozer girls has the wrong face, but I thought it looked cute with the swimsuit.  There is also a Miku Figma and some Nendroid Minis too. 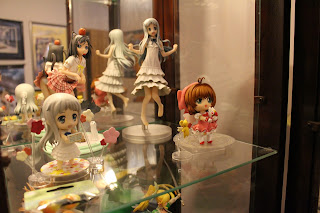 I picked up some of the miniature food items from a blind box set that a store in my city carried that had various Japanese food sets.  I get a kick out of mini food so I tend to pick up weird sets like these from time to time. 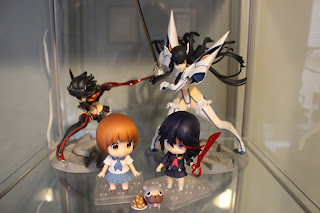 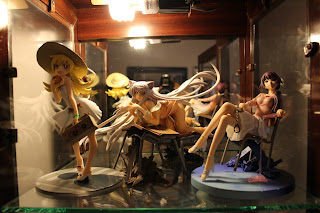 The last two photos I'm going to post (as I'm running out of time for the afternoon and I'm getting hot... 90 degrees is hot in a second story room!) are some of the more recent additions to the family.  Kill La Kill is one of the more popular anime right now and my husband has gathered himself a group of scale figures and Nendroids.  There are obviously quite a few more available out there, but these were some of the less risque ones out there.  My apologies if you are a bit off-put by the skimpy outfits.  There is actually one more photo after this set that I'm going to post below as I like the figures but if you don't like looking at figures who have slightly more skimpy outfits, just stop scrolling.  They're my husband's collection and even though I also like to look at them because of the quality, I'm sure not everyone likes to see stuff like that.  (Don't worry, there's no full nudity - or, sorry, there's no nudity!)

The second photo is from the Monogatari figures from various seasons of the series.  These are my girls as I really enjoy the floaty hair and the strong female characters in this series.  There's another couple out there that I would have liked to have gotten but these three look good together with the school chairs and desk and such.

So there you have a very condensed array of 'other' figures that inhabit this house.  I had some more from Sword Art Online that I wanted to post but the photo quality was poor.  Maybe sometime in the future I'll put more of the figures up that I own, but it gives you a good idea why this introverted cat-mom doesn't have money to spend on girly things.  ^_^  The next blog now could be on anything I can think of... who knows what it will be?


And of course, the last photo that I mentioned. 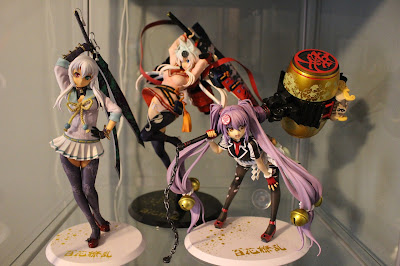 I guess this photo doesn't really show a whole heck of a lot - I was trying to be slightly careful with my angle of course.  But my husband started collecting these figures with the girl on the left, and then branched out to the others with my permission as they ranged over $100.  There are more figures from this series but after awhile if you don't get them early they cost even more, so these three are it.  Not only that, but the pieces are so fragile and intricate that they actually started to get difficult to put together.  The giant things sticking out of the back on the girl in the back were so tricky that we only move her about once a year to dust her, and even then I usually will have to put her pieces back together!  The figure itself didn't come with actual instructions so we kind of just had to find pegs and holes and see what fit and pray that it would stay together!


Posted by Milly Thompson at 3:04 PM No comments: