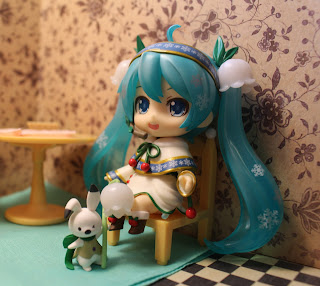 My obsession with Nendroids started a few years ago when they first came out with a few characters from Sword Art Online (Kirito and Asuna).  After that my husband and I started collecting random ones from other series that we liked, only here and there, because even though these little characters were cute, I wasn't quite taken with their chibi looks and giant heads.  If you look at some of the early Nendroids on the Goodsmile website, you'll see that they have gotten cuter with more detail and more possible poses.  We had about five or six of them by the time I got my first Hatsune Miku.  Actually I got a set of mini Nendroids pretty early on, and then a friend of mine ordered me a Miku in a kimono for a birthday, and suddenly I wanted more of them.

Hatsune Miku (a Vocaloid) has really captured my attention over the last few years.  She doesn't really have a 'story' she's really just a computer generated diva.  And there are so many Hatsune Miku Nendroids that I started finding myself wanting to buy one after another.  The first one that I took great pains to get was the Halloween Miku from 2014 and ordered her straight from Goodsmile.  And I passed up getting Snow Miku of the same year but ordered her from Crunchyroll.  I regretted that decision after I didn't get her until July of the next year (2015).  I was really looking forward to getting some outdoor shots of her with snow and flowers in the late winter, but seeing as though I got her in the middle of Summer, there wasn't much I could do with this little gal without setting up an indoor stage. 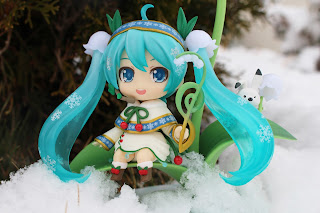 But, I can't stand putting so much effort into staging when I have a perfectly wonderful backyard!  So winter of 2015 finally came...but the snow didn't.  It was finally in late winter, in the new year of 2016, that a light fluffy snow finally fell and I had time to take this sweet little Nendroid out for her first snow photo shoot!

This photo to the right is one of my favorites since you can see her clear pigtails, and the snow is just light and fluffy and fresh.  I also got to take her base out and bury it in the snow, so that was fun. 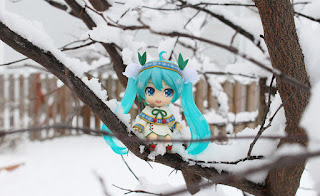 The trees were coated too (although this snow would literally last one day and be melted off the next morning by a warm rain), so I had to act fast that morning.  The sky was bright enough that her pigtails just glowed in the tree and the snow glittered.  I wish that were better captured in this photo, but I liked it anyway.  This Hatsune Miku, after all, is supposed to be something of a snow fairy, so having her up in a tree was sort of a natural setting for her!  Her bunny friend didn't make it up into the tree though, he was waiting patiently below!

Now, unfortunately, even though it snowed so late in the winter that it was getting close to spring, I don't have access to snow drop flowers.  Actually, if you Google "Snow Drop" flowers you'll notice there's a problem with them...they don't look like Miku's flowers!  However, if you look up "Lily of the Valley," the flowers are actually closer.  But...unlike snow drops, lily of the valley don't bloom until the middle of spring.  So, I had to wait longer. 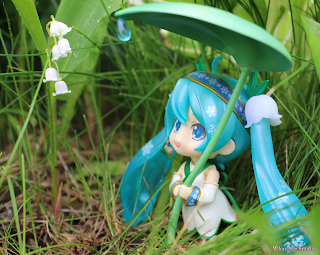 My patience finally paid off!  I planted lily of the valley years ago, probably about four to be exact (long before my Miku was created).  The first few years I barely got any blooms, but this year the flowers sprung up in a big way and had tons of little blossoms!  I was super excited to see them and hurriedly rushed my Miku outside today to finally get her photos with these pretty little flowers.

I decided to take her leaf umbrella out with her today and since she has little water droplets everywhere, I did a little staging and squirted the area down with the hose so there would be other water droplets around.  Unfortunately it didn't make a huge difference in the final photos, but the idea was solid.  This first photo I tweaked only slightly (a few stray water droplets I didn't want) and you can see her clear pigtail.  And the lily of the valley are so cute and small. 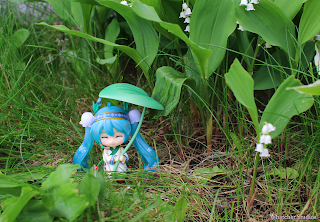 For giggles I got a few more shots and decided to tweak the colors a bit.  (Above is in the original colors)  This photo I just liked how green the lilies looked when Miku's hair was blue.  I also liked how tiny she looks hiding among all of the flowers.

Miku's shawl is removable as well, so it fit for the warmer weather and giving her a chance to walk outside in the spring without overheating.  I debated tweaking the snowflakes off of her since there isn't any snow, but it was cute nonetheless.


I will finish up today's blog about anime figures with the last photo from today's shoot.  I really liked this one, and tweaked the color up to show the yellows a bit more.  Hatsune Miku just looked very sweet hiding in the grass as a little winter fairy will do.  She seems pleasantly pleased by the weather and her work on the flowers! I hope you enjoyed today's blog! 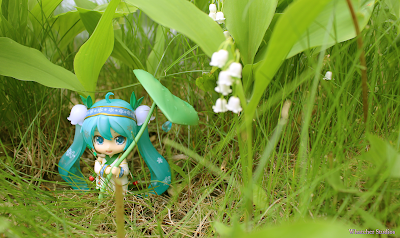 Posted by Milly Thompson at 5:17 PM No comments: