I like having guests over.  For short periods of time it's nice to have someone over from out of state, particularly my Mom or my In-Laws since we both moved away from our parents when we were married.  I had a friend who recommended it because it gave us an opportunity to learn what it would be like to depend on each other rather than our families, and for the last five years that we've lived away from our parents, I'd like to think we've become pretty independent.

However, I think as with all parents, they'd like us to be just a bit more dependent upon them.  I know my Mom would like me to call her every day, and my husband's parents would like to stay for longer periods of time at our house than we've allowed them in the past.  There's only one problem with that, of course, which was space.

It was pretty cramped when we had them over at our apartment when we only had two bedrooms and one of them was our bedroom, and the other a computer room.  When we moved into our current home, we picked up a spare room which was to be the spare room as well as a place where we could watch movies and read books.  Instead of becoming a spare guest room, however, it became a craft/hobby/library room where there wasn't a free wall to stick a bed up against.

Fast forward a year and my In-Laws finally broke down willing to pay for a bed for the room, so we suddenly had a quandary: where do we put the spare guest bed?

My husband started thinking it over, because even though my own mother would like a bed, she wasn't pushing for it (she understands how money can be and has a worse time of it than me) but his parents were the ones wanting to be here for a week at a time since they are retired now (unlike my mom, who happens to be older).

One Sunday evening after he visited me at work, my husband packed up his computer desk and moved out of the computer room.  I came home to a big ol' empty spot in the computer room and his desk and chair and computer down in the basement.  Mind you, we don't have a finished basement or we probably would have had it down there in the first place, but we did buy a carpet for down there so we could set up a projection screen and play DDR (that's a story for another time). 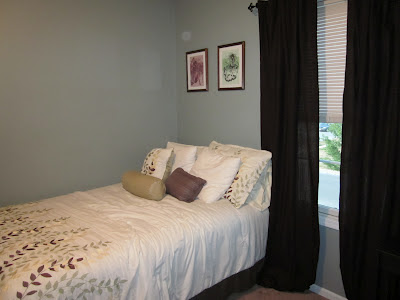 By the next week we'd ordered the bed and by that weekend I was scrambling to get my computer desk moved into the library (where I sit now as I type this) and the room cleaned up and trim painted, ready for the bed to be moved in.  We went out and bought new bedding since I had originally intended to use my old bedding that would fit it better...but decided that I didn't like the colors too well.  Found this set on clearance at B,B&Beyond and fell in love with it.  Almost would use it for my own bedroom if it hadn't been white (I will NOT put white on my bed...)  Then we took an afternoon off of work to go to IKEA and picked up curtains (which I still need to hem up, but I've been lazy) and  a small desk that I could put a TV on and possibly hook up a few gaming systems - mainly for my Wii Fit so I could still exercise. 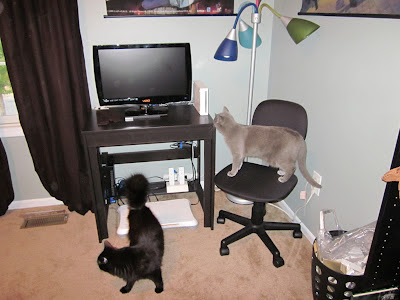 There's my cats enjoying the new set up.  Olivia (the gray) tends to hide under the bed, she likes to sleep there and freak my husband out.  He calls for her time and time again and when she doesn't answer for a long period of time he starts to think she got out and has gotten herself hurt.  She's pretty stubborn about coming to her name.  Mina on the other hand, doesn't spend much time at all in that room by herself, rather she likes to be wherever her humans are.

The photo above is where my husband's computer used to be, and the one to the right up above is where mine used to be.  No, that's not my computer desk, that was a cheap $20 IKEA desk I bought just for the TV, but ended up nearly destroying because - NEVER BUY CHEAP IKEA - it'll just break on you.  The more expensive stuff is the good stuff.  I broke two beams on the thing and if it weren't for extra stabilizing beams on the chair I probably would have thrown that $20 down the drain with the desk itself.

Meanwhile outside...the gardens are doing okay but because of the drought my grass is dead.  My husband and I have gotten to the point where we're allowing our weeds to grow because that's the only thing growing out in the yard.  We have really pretty queen anne's lace and chickory and various asters.  I wonder what our neighbors think when they see all of our wildflowers?  Ah well, it's too ugly to take a picture of, so I'm not going to bother showing you...instead I'm concentrating on inside.  It's cooler in here anyway.
Posted by Milly Thompson at 4:39 PM No comments: