Tidbits around the House 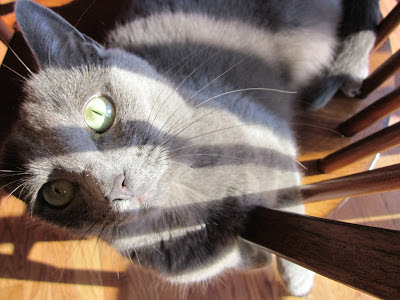 There's no real purpose to me having a picture of Olivia on here except for the fact that she's adorable and fluffy and even though she sheds like crazy, she's still my favorite cuddle cat.  Lately, she's starting to come out of her shell a bit more again since we brought home Tenchi, the littlest addition to our crew.  Of course, now he's not exactly little anymore, as he's just as tall as Olivia and only a pound away from her at 6 months.  I have a feeling he's going to be our biggest cat.

As I was wandering about the house yesterday, fighting an infestation of ants trying to eat the cat food in the kitchen, I recalled the fact that we had a package of ant traps under the kitchen sink.  I hadn't even had my first cup of coffee for the morning as I swept, mopped, and eventually set down the traps in the corners where I saw them coming from.  I think after having our new patio built that they had a new way to get into the house.  My husband was a bit wary about using traps since they kill off the entire community of ants, but as I reminded him, if there are so many ants in the yard that some find a way inside, then there are too many ants.  On the plus side, this morning I have not seen any ants, and maybe it's because it's finally stopped raining for more than two hours (the sidewalk is actually dry the first time in almost a week).  But I'm happy that they've decided to move on...

Here's a helpful tip if you ever buy a milk carton that's the old fashioned cardboard kind.  If it doesn't have a screw cap, then use a paperclip to seal the opening shut again.  It'll keep things like creamer, heavy cream, and even regular milk good longer than just closing it and shoving it back in the fridge.

What really irritates me about working retail sometimes is the fact that people have the tendency to look down on you.  Not sure exactly why that is, because I know people who don't work retail and make less than I do, and really, if you don't have a college degree of some sort, most retail stores won't hire you for a management position, that's just how it is.  But just the other day I was calling out for the next in line.  "I can help who's next!"  I said cheerfully.  The woman that came up put her items on the counter and practically growled at me, "URGH!"  I blinked a couple of times thinking she was irritated for having waited too long (which is usually why they get mad...or it's because they couldn't find something.  Usually I can either apologize to make them feel better or find the item, at least, usually.)

"Is something wrong?"  I asked, almost hesitating to find out what was going on.

"It's NOT, 'Can I help whose next?', that's NOT proper English.  And you people always say that, every time I come in, it's just wrong."  I stared at her, tried to explain that not everyone said it that way, but then it occurred to me that I wasn't wrong, because, in fact, I was saying the contraction of "who" and "is" - hence, "who's".  She was still going on about how it was the "English teacher in her" that couldn't stand to hear it said wrong.  I rung her items and said, "May I help the person who is next in line.  Is that better??"

"Yes, that's better."  The woman then left and I shook my head, because it really wasn't any different than saying "May I help the person who's next in line?"  And the fact that she had to jab in there that she was an English teacher, as if all of us working in retail are stupid.  I, in fact, have a degree in English as well.  I've thought at various times that maybe what I was saying wasn't correct, but the truth was, I even looked it up in the Associated Press Handbook to see if the contraction was real.  It is.  But for some reason I think she thought I was saying "whose" which would be incorrect.  Unfortunately with the English language, the two words, "whose" and "who's" sound identical.  The fact that she got upset and didn't say, "are you saying the contraction?" means that she got angry without thinking it through.  It was worse than when someone has to point out the distinction between "can you" and "will you".

Speaking of English pet peeves; I have a few of my own.  Recently, it's mostly to do with when people add an "s" to the end of a word that isn't supposed to have one.  A few examples:  Targets, Walmarts, Meijers, JCPennys, HotTopics, and Krogers.  I've noticed that oftentimes it comes more frequently in Southern areas, but then again, everyone at home up North used to call it "Meijers" too.  Now, I have thought about it a bit to think that perhaps this comes from our past when places were named after a specific person.  And maybe back in the day it would have been "Kroger's Grocery" meaning some person named Kroger owned a grocery store.  So, perhaps, as stores eventually grew big, they dropped the possessive "'s" and stuck with the last name by itself.  Not all stores did this, I know that, but I wonder if in the collective conscience, some people still think of the stores as belonging to someone. 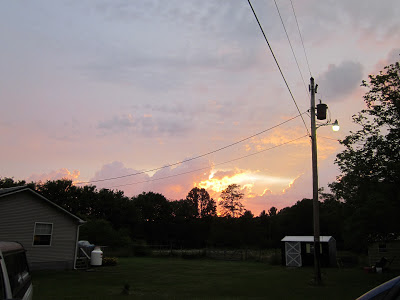 I wish it were possible to just become immune to Salmonella poisoning or whatever other bugs exist on food that make you sick.

The reason I say this is because I just came back from a trip to West Virginia and while there ate at a Chinese restaurant that my husband loves.  He's been eating there for years, and now I sort of have been too, but things were getting a bit sketchier over the last few visits, and then suddenly a friend and I both ordered Egg Drop soup and we both got food poisoning pretty bad.  Seems that I keep getting it once every few months to the point where I just don't want to eat anywhere that I feel a bit weird about the food.  This time it was a slightly suspicious green colored egg in the soup.  Didn't think too much about it because I've had odd colored pieces in the soup before without much trouble.  However, what should have made me stop eating it was the fact that the soup wasn't broiling hot like they usually get it.  Usually they're bringing out your egg roll or your meal by the time it cools down enough to eat without scorching your tongue.  This time, no such luck, which meant that whatever was in that bad bugger was still alive.  SO...  A note to you, if your egg drop is not scalding hot, don't eat it!

As for the picture above, this was the sunset above my in-law's house on the night before we left.  I was recouping from the food poisoning by that point, thankfully.  I'm just glad it hadn't been so bad that I couldn't go places, because I've been sick like that and on vacation, it's just not any fun. 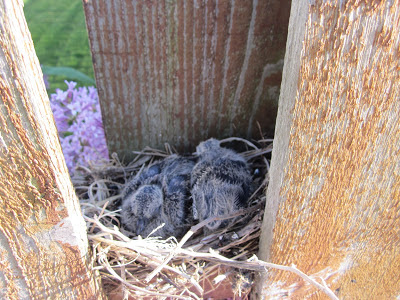 On a last note, I think because we've been having almost monsoon type weather (which, for the record, I actually like rather than last year when we got only a couple rains during the whole summer), we've also got a bunch of bugs.  With the hoard of bugs (remember the ants I talked about?) there are also a ton of birds.

I've heard a saying once that "you never see baby pigeons".  Well, these aren't baby pigeons, but a close cousin, the mourning dove.  Each year we have at least one pair of mating doves that hang out in our yard, and usually they find themselves a nice spot on our fence to build a nest.  This year it was in the back corner above a lilac bush.  The reason you "never see a baby pigeon" is they usually stay in the nest until they almost look like an adult (only a bit smaller in stature) and then they're let out to fly.  Unfortunately I'm pretty sure only one of these little ones survived, as I only saw one of them after this once it was able to fly.  The other probably went to a neighboring cat.

We have two, a black one, and a calico-looking tan stripe/white cat, both pretty fluffy.  I call them "him" and "her" consecutively.  "He" will come up and stare in the back door at my cats and since he looks like my Mina, sometimes I get a heart attack thinking she's gotten outside.  "She" will roll around in the catnip growing in the back yard.  Both of them, when they get too close to the Mockingbird that lives around here, will get attacked and chased away by the little gray bird!

I will leave you with one last thought:  Have you ever seen a baby pigeon?

Posted by Milly Thompson at 10:46 AM No comments: