Wow...it has been a long time since I've written in here, hasn't it?  All the way through 2019 and through part of 2020 I was pretty much glued to my blogs, trying to get something updated once a week or so, and trying to help my mental health by getting things out of my head an on to "paper".

Now, it's been about six months later and things are, well, more or less the same.  About the same time that I left off of the blogs I started into the game of Minecraft.  It was a free solution to me wanting to create and decorate and explore the world around me (well, free in the sense that I only had to purchase the game but not the materials, that just took time).

I feel like I really need to dig deep into my new obsession with Minecraft.  Here I am, about to go into my 42nd year, and I'm obsessed with this digging, building, and battling game.  At first I played it only on the weekends, spending time with my friends on a shared server and eventually only my husband and I were on there for the most part until then there was me.  My friends still helped me defeat the dragon, still worked on their builds, but eventually they moved on to other games and doing other things.  We'd exhausted pretty much all there was to do - especially since they weren't into building and designing as much as I am.

And obsessed...yes, my evenings were spent exploring and building maps, finding beautiful scenery in this cartoon landscape and it helped me forget about how 2020 sucked.  About the fact I could no longer play D&D with my friends in person, how I barely left the house but to occasionally go to the grocery store or the park to walk.

In this world... I was free.  I could hang out with my friends (when they were there) or hang out with the NPC villagers which is what I spent a lot of time doing, coming up with small stories and going on adventures to build the most amazing things I could think of.  Of course...this was before I started watching YouTube videos putting anything my mind had come up with to shame thus far...but that's for another time.

When I did discover all of the other builders out there I realized quite quickly that I wanted more challenges.  My husband tried to start up a modded game, and he played with me for a few days, then dropped off each time we'd start up something new.  I'd press on, enjoying every moment until I had my own single player "X-Life" game where I managed to max out everything and had a wonderful village all on my own.

Since then I've played around with other resource packs (the picture above is MizunoCraft16 with some Ghoulcraft thrown in) but I'm pretty happy with how close I could build a replica of a house I live in.  It's not perfect, but since I had the constraints of what blocks are available and not having a whole lot of extra mods...it's not too bad either. 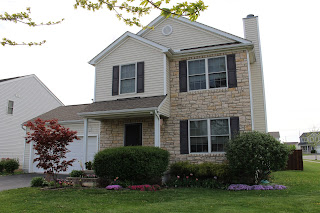 I've thought of doing some other things with this new found obsession, but, overall, I guess my anxiety makes me push a way from going streaming or trying to do other things like that.  Is it bad?  No, absolutely not.  Not every Minecrafter needs to be a Twitch streamer...or YouTuber, but I do like to show off what I've created and I'm proud of the things that I've done with my time even if they aren't physical creations.

Unfortunately, I feel a lot of the time that the push I had two years ago at this time, when I'd lost my job at the craft store and moved into attempting crafts full-time for the summer of 2019... it feels very far away now.  I'm definitely a different person than I was then.  I don't feel like the same excited, bright-eyed, "let's do this!" kind of person I was then.

But you know, dammit, even if people don't appreciate the time and effort I put into this game... even if they don't seem to care that I want to show them what I've made because it's not tangible...well, screw it.  I AM PROUD of it.  I find relief in these things, no matter how strange it might seem.

And I'll probably keep up with it for a while longer, because that's what brings me comfort.