Small Gardens you Can Grow at Home 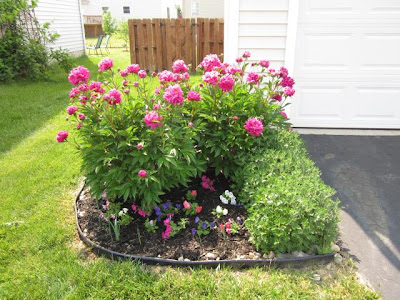 I've often thought of my yard as a handful of individual mini-gardens.  Each little ecosystem is living in it's own balance and a carefully planned garden can be beautiful all on its own.  You can make these mini-gardens wherever you are, whether you have a lawn to plant or maybe a patio at an apartment, or perhaps you're into inside gardening.  Wherever you'd like to plant your gardens, there's a size and configuration to suit any need and green thumb talent.

Today I'm going to discuss three different gardens that I have in my lawn (I have more, but these are my features for today). 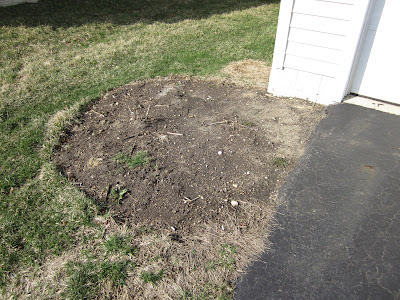 To the right above is my "Peony Garden".  The peonies, strangely enough, were pre-existing when I moved to this house.  They were the only flowers, besides one sad little dianthus and some flowering bushes.  Whoever owned the house before us either didn't like gardens at all, or took everything they could move with them (or had a lot of perennial stuff that died).

As you can see, my peony garden was pretty darn ugly when I first moved in. I was actually surprised when the first sprouts of the peonies came up because I wasn't sure anything was in the garden.  But spring turned into summer and with the first signs of the peonies I started planting other plants.  The right side is lined with chrysanthemums which are also a purple/pink hue and will probably start blooming in another couple of months.

Small stems around the front are irises I planted this year, not sure what they'll look like, I haven't seen them bloom yet.  Behind them are petunias, behind the peonies are snapdragons and a lilac bush.  You can't see the lilac, it's tiny...but eventually I think I might have a taller bush to tower over the peonies.

This garden actually mostly takes care of itself.  Peonies up and bloom and then I'll cut the dead blooms off and they'll be pretty bushes through most of the summer.  The petunias will fill out and the mums will bloom from summer through fall provided you trim the blooms off as they die.  I could avoid any yearly planting if I put in some other kind of annual, but I like the look and smell of the petunias. 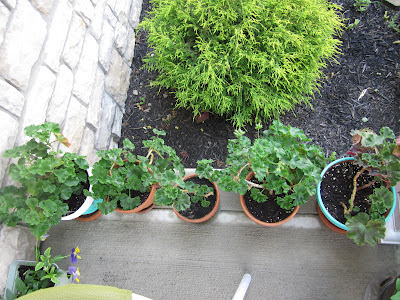 The second garden is my geranium potted garden on my porch.  These geraniums (which seen here and merely getting really poofy green with leaves and will start blooming in another week or two, some blossoms are already forming) are mostly 2-5 years old.  (The one on the far right is a trimming from older plants).  I take geraniums inside in the winter and they go into something of a really ugly stasis for the few months of cold, but really perk up with warm weather and sunshine, a bit of Miracle Grow and water.  I actually had more luck when I had a Southern facing window when I lived in an apartment and I could get them to bloom during Christmas indoors. 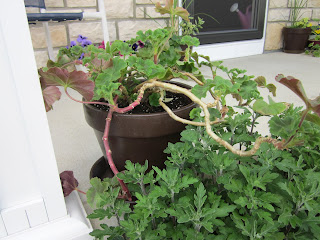 I'd recommend geraniums to anyone who is a bit leery of gardens in general.  Buy a red geranium.  I say this because the fancy ones tend to die quicker or if you aren't using the same fertilizer that the greenhouse used they tend to change color toward a red anyway (I had a bi-color that's now solid pink and deep magenta also turned red).  Buy a slightly bigger pot than it originally came in, and have fun with colors, especially if you're going to bring it in you'll want something pretty to look at when the plant goes into its winter 'ugly' stage.  Buy a small box of Miracle Grow - it's not that expensive if you buy a "sample" box and with geraniums you'll only need to use the small scoop side once a month while you're watering it.

And DON'T over-water a geranium.  It'll start getting ugly after not being watered for a month, but normally they won't die, they just kind of go into stasis. (Above is an example of the ugly phase, but this is a five year old geranium I haven't trimmed up yet).  Make sure the dirt is dry before you water it again.  If it's wet, it's still happy.  If you can remember to water it once a week, you're doing good.  The blooms will come out and the leaves will fill out with enough regular sun, water, and fertilizer ready for the next summer.  As leaves die off and flowers wilt, pull off dead and trim off extra long branches and root them in a glass of water (like a potato) and you can make a new plant too. 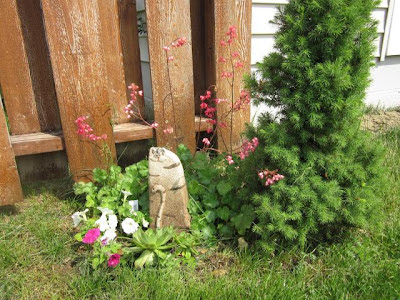 Lastly is my Cat Garden.  This garden is actually about 3 by 2 foot (smaller than a poster).  If you've got just a tiny footprint by an apartment, or maybe a tiny box, you can plant a garden like this one.  It's just a mix of a few different perennials and annuals.  Putting a focal point in like a garden sculpture is often a fun way to add something special to your garden.

I'm usually pretty careful about putting too much 'junk' in a garden.  I have some neighbors who have every spinning thing they can think of, or another that uses white pots that completely cover their lawn!  (I need to get a photo of it this year, it's pretty crazy).  Others use a ton of garden gnomes, or other decorations they leave out all year.  Don't!  If you've going to decorate your gardens with accessories, don't go overboard.  I tend to think you should make sure your item isn't too big, usually a neutral color of some sort, and make sure you take it inside during the winter or it'll look like you're just being lazy (unless you live in a warm climate and can have a garden all year long, then do whatever you want!)

My cat garden consists of the evergreen bush (it stands maybe 2 1/2 foot tall) which apparently needs a trim now that I'm looking at it.  Also three corabells, hens and chicks and a couple petunias (yes, again with the petunias).  I lucked out actually, none of the petunias were blooming when I planted them and the pinks match the corabells nicely.  Make sure you make a nice balance - taller objects in the back (the corabells will get bigger with age and they spike up nicely) and the hens and chicks will stay small and grow across the ground.  The petunias are the only annual and I've considered replacing them with a primrose which would also provide bright colors at least in the spring.

I hope you'll give small gardens a try!  I hope these little pictures inspired you to do some gardening of your own!  Enjoy!
Posted by Milly Thompson at 7:34 PM