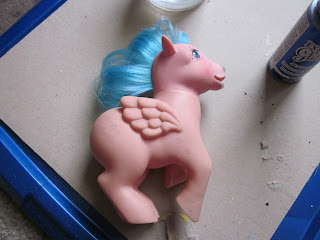 Meet Firefly.  Back in the 1980's when My Little Pony was first getting off the ground with the toys and cartoon, Firefly was the main pegasus pony.  Back in 1983, this was my first pegasus toy.  As you can tell, she was well loved.  Over the years her 'cutie mark' has disappeared to almost nothing.  Her tail was lost when I was a little girl.

It's a curious thing, but I remember very distinctly the day that I took her to school with me for show and tell.  I loved Firefly, and even though I had a handful of other ponies by that point, she was the only pegasus and she had her front legs molded in something of a pose which was completely different than the earlier ponies.  If you've ever looked at the original ponies you'll see they are very stiff legged.  Anyway, I took her on the school bus with me to Kindergarten to show her off.  I'd discovered sometime before that her tail would pull out since it was basically one large hank of artificial hair with a metal bracket wrapped around it.  I'd show it off to my friends how I could pull the tail out and then stick it back in her soft rump. 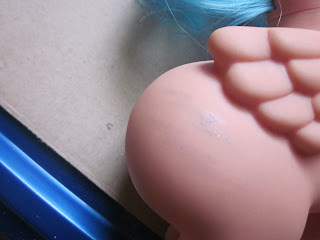 Unfortunately, that single simple thing backfired on me and on the school bus home from school the tail was lost forever.  For months...literally months, maybe even years, every time I was on a school bus I looked for that darn tail.  Even through High School I still looked on the floors of school buses thinking I'd find it, or one of the other handful of things I've lost on buses over the years.

So, maybe that's the reason that the incident sticks in my head so clearly.  Maybe the affection that I showed to Firefly is also the reason that most recently I decided that this favorite childhood toy of mine deserved some much needed attention.

It also helped that Folk Art paints came out with a product a couple of years ago called "Extreme Glitter" paint.  And as luck would have it, they had dark blue glitter just about the same color as Firefly's cutie mark. So, I just recently embarked on a process of restoring poor Firefly back to her former glory.  I guess the only thing I couldn't do is fix the discoloration between her head and and body since that was a problem in the actual vinyl mold color. 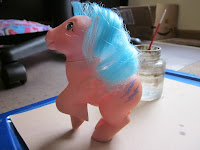 The thing about Extreme Glitter is it takes quite awhile to get the results you want if you want a LOT of glitter.  The picture to the right shows the first coat of glitter paint over the original cutie mark.  Luckily enough of the original glue from the factory still existed if held up in the light just right so I was able to reproduce it pretty closely. 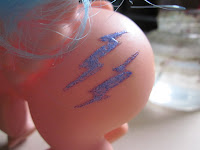 Here is a closeup of that first layer of glitter as it's drying.  It starts out as a milky glue-like substance with just barely any glitter.  The reason for using a paint like this rather than using just glue and glitter is the obvious one, you don't have to worry about the glitter coming off over time.  Of course it can still rub off like the original paint did, but using glue and glitter would have produced a less accurate reproduction. 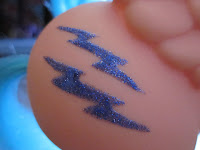 Now fast forward about three coats later and the cutie mark is pretty much where I want it.  There was still a problem though...her tail.  Now, there are plenty of places around that you can order fake hair, but since I wasn't really planning on doing more than one pony restoration at this time I started looking to find an alternative to ordering it online.

Over the years I have "saved" quite a few ponies.  There was a time where you couldn't buy new ponies at the store, and during those periods I would go to flea markets and garage sales trying to find ponies I could salvage from the brinks of children's hands.  I would also randomly find ponies in the woods across the street from my house and that's how I found two or three including an Apple Jack toy which was a joy for me since growing up I had never had her.  I also got about two or three ponies from friends who did not treat their toys like I did.  One I've always sort of called "Frankenpony" since she was one of those 'brush and grow' ponies which I later found out was named "Ringlets".  However, she'd long since lost most of her tail, cut by some unfortunate scissors and then hot glued into place, and her head was also hot glued into place since it had been removed at some time too.  Normally I'd hate to 'chop shop' one of my toys like that, but one stripe of her mane color is only a shade off in color so it went to restoring Firefly's tail today. 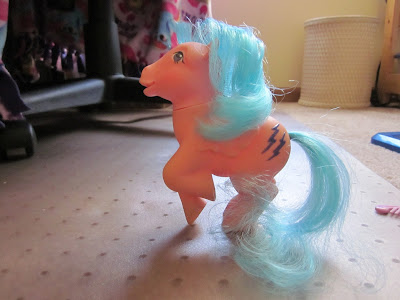 The final result is a much happier pony.  She still has a few chips in her hooves, a bit of dirt here and there, and as I mentioned before her discoloration from using different vinyls in the past when it was produced, but at least she is now restored to some of her previous glory.

It's fitting that this pony's character eventually turned into that of the current series' "Rainbow Dash".  I'm proud to be the owner of this toy on her 30 year anniversary.
Posted by Milly Thompson at 5:20 PM