The Storm That's Not Yet

Being someone who really enjoys the outside for relaxation, it's easy to wake up in the morning and see the overcast sky as being a bit depressing.  Especially if that overcast sky looks like it could rain at any moment.  But it's worse when you know that it's not yet, but sometime this evening that it's going to rain, and yet, there isn't any sun, it's overly windy, and the pressure outside is acting all crazy. 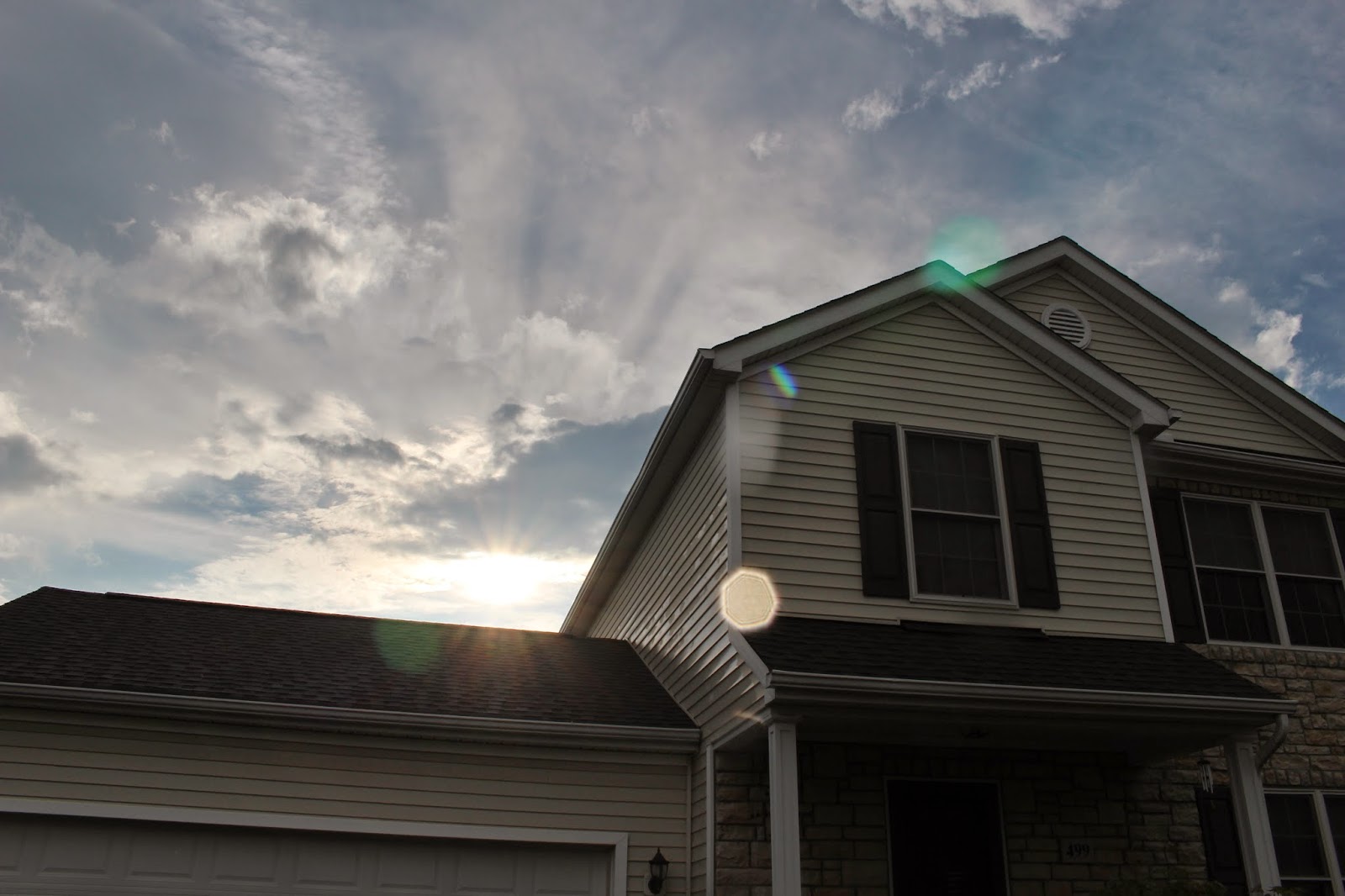 The photo to the right, was not one of those days, rather, we'd had a pretty nice buildup of storm clouds, then it basically blew over with only a little bit of rain, leaving this beautiful glimpse of the sun in the West and a very faint rainbow to the East.  I like days like that, because you know what's coming, and after the storm buildup, this exciting moment of 'yes, it's going to happen!'  It finally does and you're happy it did.

Today...it's not so much there.  When the weather report this morning talked about the storm and I watched the radar, it was quite obvious that the northern part of the state was going to get hit, and quite badly, but this middle part of the state was just going to get a lot of wind for hours, lots of blah clouds, and then maybe if we were lucky, get some lovely storms, once it got dark again.

Okay, so I'm kind of a weather junkie.  I'm not ashamed of liking weather.  In fact, I was quite the nerd in school and when I had the opportunity for a meteorological section in a science class I took, I was pretty excited.  Unfortunately, it was the last unit I got to take at the end of the year and my partner fooled around the entire time so I've basically had to learn things on my own. I learn all sorts of earthy stuff though, like names of trees, birds, plants and animals, so it's kind of in my nature to like this kind of thing.

I'm not ashamed to admit that I got really excited upon meeting my first weather person from the news when I was working at the mall in Michigan so long ago, Norma Hall.  And then just last week I got to meet another weather person, Marshall McPeek.  It's pretty nifty to me to meet people who actually studied the weather.  In fact, growing up I went to school and later college with someone who was studying the weather, but I never did find out what happened to him after we graduated.  I always teased him to say he'd make a great newscaster, but I think he was always more interested in strictly the science of it. 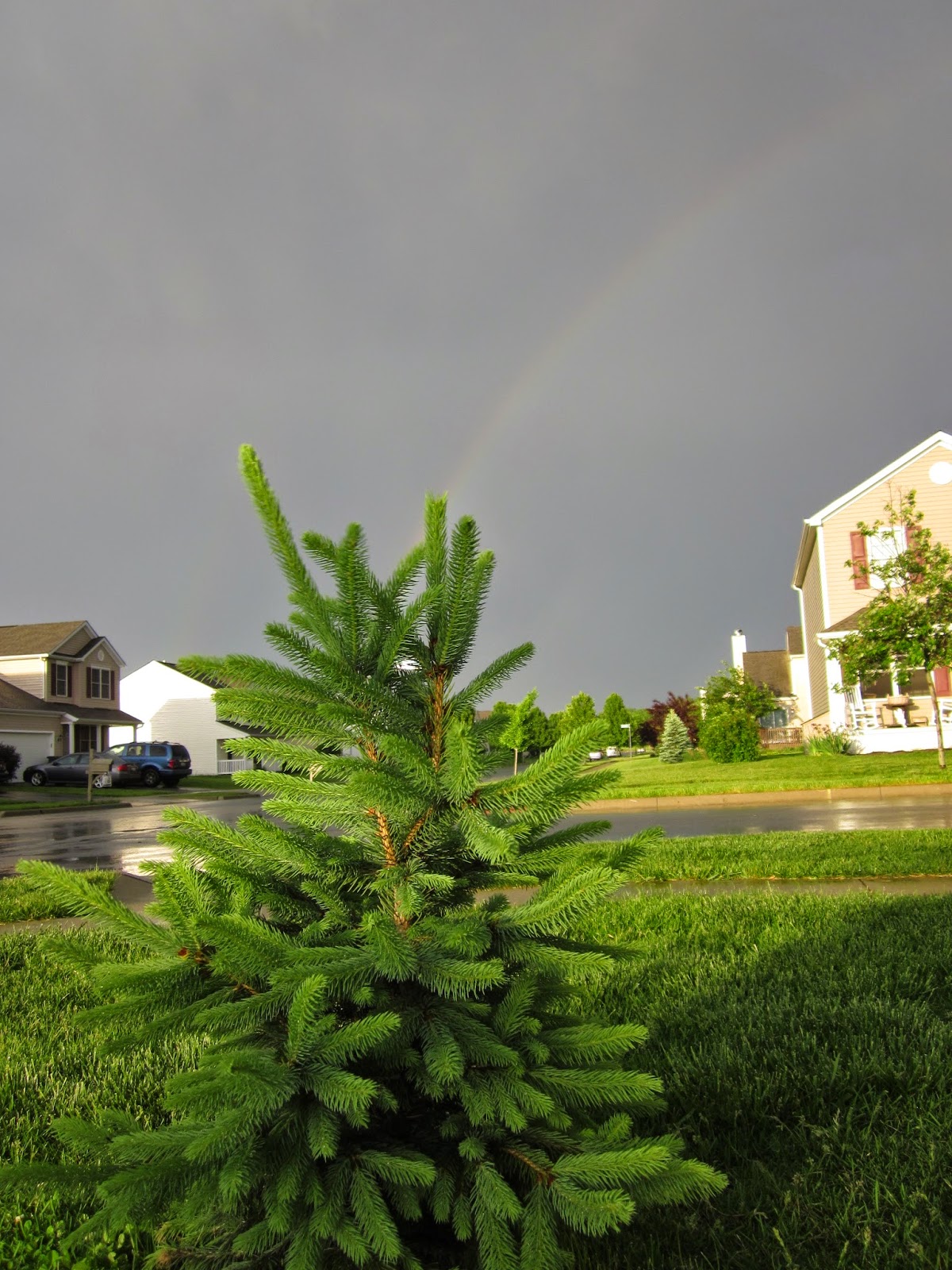 And as for me, the weather junkie, I have a coworker who always expects me to make weather announcements at work.  I wasn't even aware that I was doing it, except that I suppose from time to time I announce, "oh the storm will just blow over," or "It'll stop raining in a minute."  Or something like that, "it'll get colder tonight, so you might want your jacket."  Okay, so I like the weather, is that so wrong?  It typically produces some pretty awesome things. 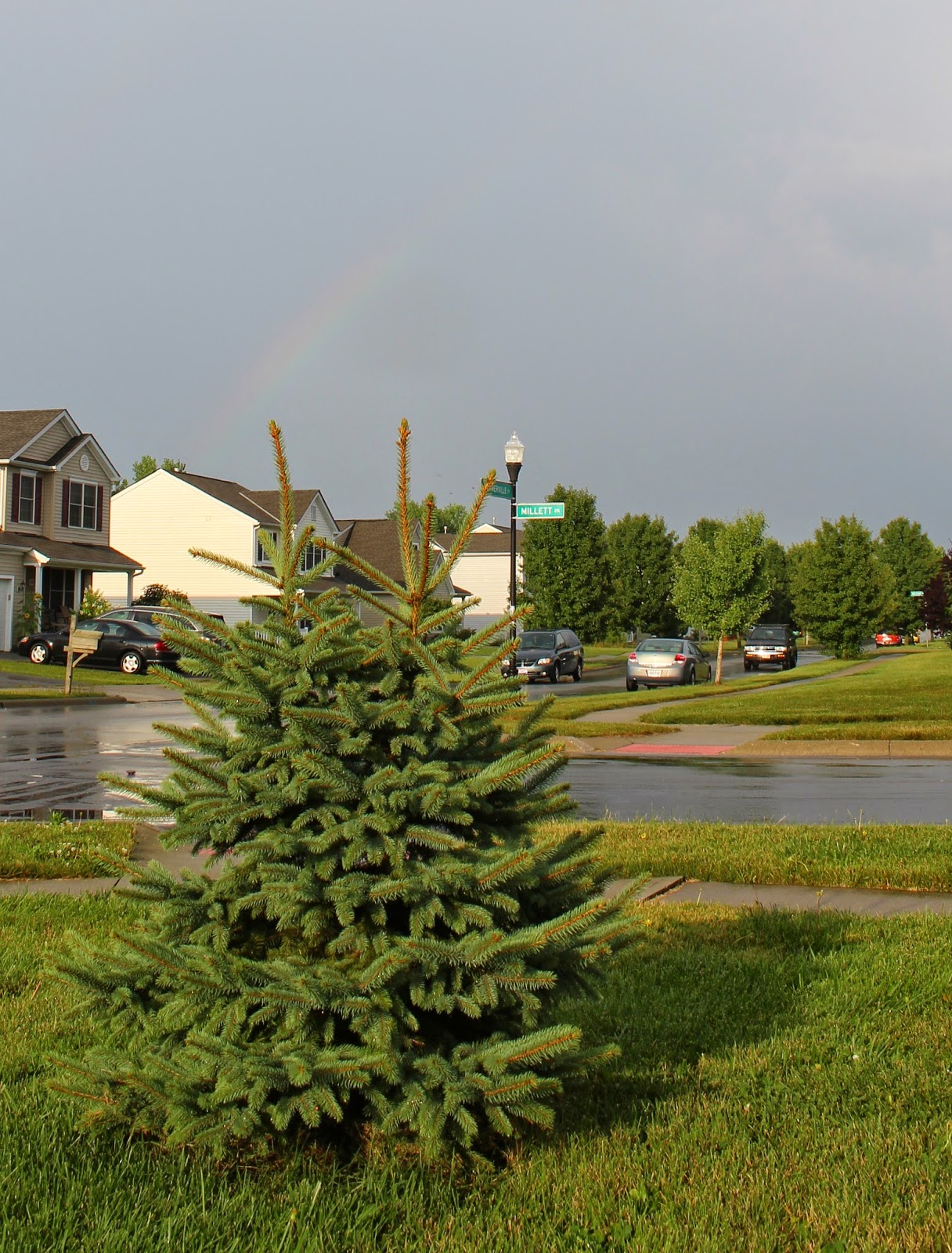 Just for my own reference, I decided to dig up a unique photo I took back in 2011 in the summer after we bought our house.  I'd planted this little pine tree and it made a really good contrast with the rainbow and all of the green and the sunset hitting just right... I loved this photo and yet didn't get all that much interest in it when I posted it online.

So, for myself, when I see a rainbow in the same direction over my little tree, I go out and take another picture.  I had to pull back quite a bit to take the photo however, as the pine tree is now about three-four times as tall as it was in the first photo!  I knew that pine trees grow quickly, but it was mighty small when I originally planted it.  Now it distinctly has two tops for some reason (although you can kind of see that when it was a younger tree) and almost looks like there are two trees there.

Just as a mention of how lighting can effect photos - the earlier photo was actually taken with a little Canon Powershot as opposed to my fancy Canon SL1, which I used for the second photo.  They're both clear, both taken of the exact same subject matter, but the lighting was different and thus had a completely different effect.

And now I await for the storm that not yet....
Posted by Milly Thompson at 4:40 PM