Year of the Ram 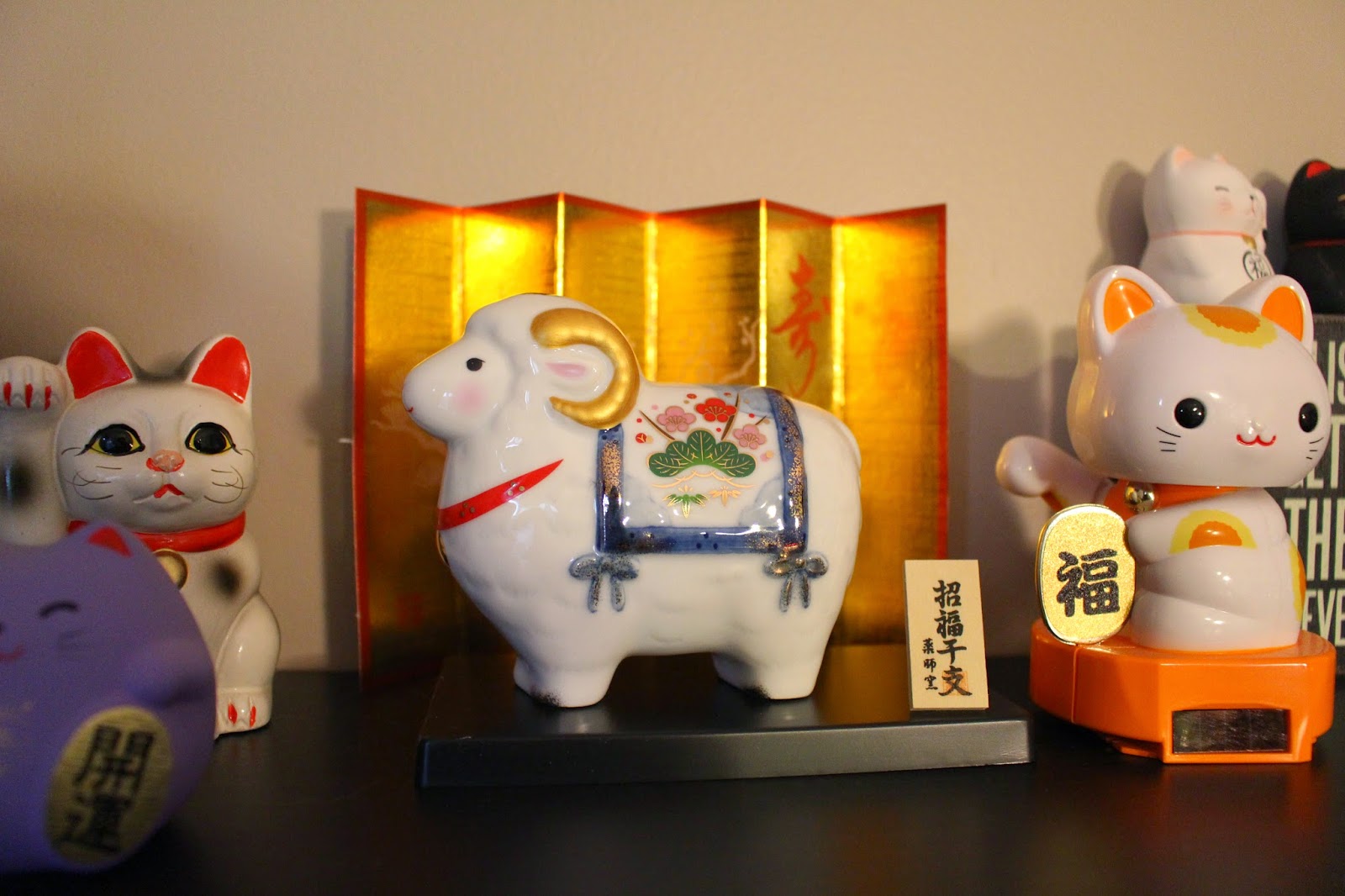 A new year has just begun, and even though we aren't quite in the Chinese new year when the Year of the Ram begins, I thought I'd make a blog celebrating this cultural zodiac. Mostly because I was born in the year of a Ram, oh so many years ago, and even though my husband treats it as his year as well, he was technically a Horse if you're dealing in the Chinese calendar as opposed to our Western calendar.  But, he seems to fit the Ram better, so I don't argue the technicalities.

I realized after my last post that I was being rather bleak, and perhaps I'll take that last post down as though even if it does represent my feelings at the time, I think it's rambling nature doesn't seem to hit a specific point.  Perhaps it's a good thing that I labeled it "randomness" because you really don't know what you are going to get when I put something under that label.

I'm hoping this year that things will be better than last year.  This isn't to say that 2014 was a bad year necessarily.  I had some good things happen in 2014.  Let's see, I got a raise in the summer after my review.  I went to Pittsburgh for the first time.  Somewhat started a new fandom of Hatsune Miku, although my My Little Pony fandom is still in effect.  My husband built me a brand new computer.  Almost finished the interior of our garage, but at least got most of it organized.  Had my 5 year anniversary.  Learned the word "oppai".  Haha haa.

Unfortunately, this year also hasn't been super fantastic either.  I didn't get to go on an "official" vacation anywhere, which made me rather sad, although my Mom enjoyed having me visit her this summer instead.  Our one couple we were friends with got a divorce, and even though it turned out to be the best thing that happened to the wife (in my opinion), it opened our eyes on the husband which made things awkward for my husband who was friends with him.  Then we got into a falling out with some friends through out convention in a similar circumstance which also turned into lots of awkwardness and as my husband's best friend stated, "emptied our emotional bank accounts," during September.  Two of my cats had to go in to get teeth pulled as they were starting to rot and fall out.  The spring came and the neighborhood boys started pelting our house with cement blocks - and then once Christmas break started, did it again, putting rather large holes into our siding now.  My district manager seems to have it out for my boss which in turns puts us all into a fowl mood.

And then throw into the equation the fact that I turned 35 and keep having problems with my body breaking down from sore knees when it gets cold, allergies, and other more disgusting intestinal tract problems I'm not going to go into.  Then there's my emotional balance that keeps getting thrown out of whack.  It feels as though either I'm over-emotional and I get really stressed out and feel like a mess, or I shut down my emotions completely and then I can't enjoy things like holidays and special events.  Maybe I have a touch of bipolar disorder, although I've never been diagnosed with it, and it doesn't go to extremes (as I've rarely ever go to extreme joy mode and never get to must kill myself mode either - thank God!) - it still feels like there's rarely times where I feel completely balanced with the two extremes.  A day like today, where I feel something of a clarity is about as close as I can get, and seeing as though today is the first day of the new year, I believe I should be feeling something about it being the new year, but I don't.  But I do feel somewhat content, so that's a plus.

So what do I hope for from 2015?  Well, I do hope that I can find some kind of balance.  Maybe find some kind of reason to continue on and maybe start setting some goals for myself.  I thought about perhaps really going after learning Japanese.  Thought about starting an exercise regime.  Maybe trying to write more.  Maybe I need to make some sort of other change with my life.  I'm just not sure.  My friend who got the divorce is pursuing a ton of goals that she had basically written off for herself when she got married (or her husband made her, I'm not even sure she's sure of that) and for that, I'm super proud of her.  I think, what are the goals that I had before I got married?  Maybe there are some that I've let slip to the side over these last 5 years or more that I've known my husband.

I had hoped to become a writer.  Then I learned what that entails.  I thought about doing some artwork and then I realized that I don't have the ambition to follow through with it as I want.  Maybe my true goal for 2015 is to find a passion for something.  Maybe finding that passion will help me feel content.  The problem is, I'm a Jack of all trades but a master of none.  I find so many things that I enjoy doing but there isn't a single one that stands out and says, "Pick Me!"  Well, except perhaps writing.  But it's such a difficult career to get into.  First there has to be good writing.  Then there has to be someone to believe in your good writing.  That's where my career came to a stand still.  I write, but if I can't even get my own family or friends to read my writing, then why would complete strangers read it?  Perhaps I should make "How-to" manuals...would people read them then?  I do enjoy telling people what to do!  (ahahaha!)

So, that's where the problem lies.  I need to have someone believe in my writing so that I could get an agent that would sell me.  When I get someone who could sell me they could set up jobs for me to write and before long maybe I could actually make money doing it.  Of course there's always the route of self-publishing.  But then I'd be at step two again - find someone who wants to read what I have to say.  If I put $1,000 into publishing a book, I'd have to go and find someone to sell that book, someone who wants to read it, and someone who is excited to pay some money for reading about me.  I've met self-publishers before and I've met some who are so extremely outgoing that they have done a great job selling themselves.  Then I've met some who just fail and have a stack of books in their basement because they can't find anyone to buy it.

But again, maybe if I have the ambition...or rather, the passion to do something I really believe in, then I'll have the passion to sell myself as well.  It's hard though, as I've found out over the years, fans come and go, and unless I have a lot of them, when they go, it's like they've taken a piece out of me.  It feels like every time I've lost a reader that some part of my love of writing has disappeared with them.  They have taken the parts of my soul that I opened up to them and then threw them away and went onto bigger and better things.  Maybe that's why I still blog, I do it for myself and I rather think that I enjoy doing it, but no one's taken this part of my writing away from me.  My original stories and my fanfiction are almost all gone now that all of my fans are gone, and that part of me feels lonely and sad and unwilling to get to the place where I used to enjoy writing those fantasies.  Maybe someday I can do that for myself again, but it does seem rather a waste of time to write things that no one is going to read, at least, my older, more boring self believes that.

Oh well, my blog has become rather a downer again, now hasn't it?  So maybe I'll try to leave this at a brighter note.  It's supposedly the Year of the Ram, and thus should be a lucky year for me.  Things are looking up a bit at my job, or rather, they've settled down a bit and at least our inventory isn't around my anniversary again this year.  Things should be bigger and better at our convention this year and maybe I'll be more on top of things this year.  I plan to plant more prickly pine trees on the side of my house to try to keep neighbor boys out (I hope).  I'm going to try to focus on being more positive and find a focus.  Even if that focus is just cleaning up my computer area and my library.  Maybe find a new series to watch on TV.  Perhaps keep some plants alive through the winter.  Maybe finally get new hardwood flooring in my living room finally, and be able to redecorate to get a sense of 'this place is new' - at least, I hope all those things.

I hope you have a good new year.  Maybe yours will be better than 2014 too.
Posted by Milly Thompson at 4:34 PM