It's November now, and yet, for this part of the country, it doesn't really feel much like it.  If you're like me, you probably know that things aren't quite the same as it was when we were younger (unless you're young and you remember winters coming later in November and sometimes not getting hardly any snow at all) and even though I live farther south than I did as a child, it's still weird when on a November afternoon I could go outside in short sleeves and bare feet.  I'm not living in the Southern states, I'm in Ohio.  At this point in time we usually could have gotten a snow, or at least a good hard, killing frost that takes out all of my flowers in the front garden and I'm forced to pull in all of my plants off of the front porch. 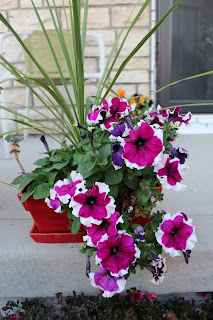 This year, however, my tomato plants got the small frost that hit, but not the front porch and so I have flowers in my planters on my porch one wouldn't normally see in November.  Take, for example, the perfectly happy petunias you see in the photo to the right.  I kid you not, even though I did take this photo over a week ago, the same plants are blooming like crazy still in their red planter and actually a second round of flowers sprung up in the planter from seed and started blooming as well.  Remember, I'm in Ohio.  It's November.  Let that sink in a bit.  Normally I keep geraniums all year round and I tend to bring them in after the first frost, but it was so brief this year that they're actually doing better than in past years at this time inside the house.  Now, tell me that global warming is not a thing.  Tell me that climate change does not exist.  Maybe you think it's El Nino (which, I heard today, may make this winter the lightest one since our almost no-winter in 2011 where we got less than 12 inches of snow) but no matter what your take on it is, this isn't normal.  I'm not growing these plants in a greenhouse, I haven't taken them inside once, it's just sitting on my porch being happy. 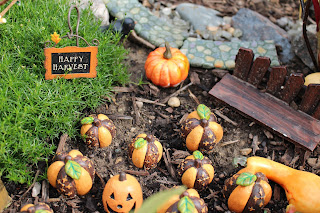 Nevertheless, I won't dwell on that as my topic today because the real reason I'm blogging this evening is to show off my new Nendroid, Noel.  She's from Sora no Method (or Celestial Method if you're looking on Crunchyroll) and she's quite special.  But before I get into her photos, let me do a little setup for you.  Basically I've been starting to collect fairy garden things for my Nendroids.  Not all of them are quite the right size, so you have to be picky about it.  I know that some doll accessories out there will do the job too, but I've been more concerned with finding items that I personally like in order to post photos with my Nendroids.  Some of the other photographers online have entire setups with rooms and accessories, but I'm more of an outdoor kind of person.  So in the photo you see to the left, there's a few pumpkin accessories I spotted at a fairy garden store in Frankenmuth, Michigan.  At the time I didn't buy any of them, but later did when they went on sale (in fact, I found them today at a local garden center that had them on clearance).  It's past Halloween now, so I didn't want to pull out the Jack'o'Lanterns or anything, but I thought since in one scene of the first episode of Sora No Method, Noel is waiting for her friend Nonoka and Autumn passes.  She happens to play with a fox she makes friends with, and I set up my photos thinking of that first Autumn she waits for her friend to come back. 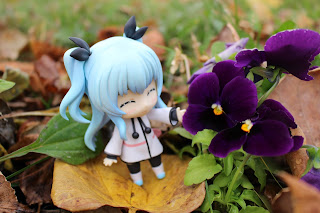 The Nendroid Noel is a pretty awesomely cute little character.  I had to wait an extremely long time to get my hands on her though as I'd ordered her online through Crunchyroll and we're pretty sure they lost our order.  After waiting over a month past her release in Japan, we still had no sign of her showing up.  After finally sending an email about it, she showed up with two other figures we were wondering about.  But the wait was well worth it since she comes with a load of extras, but if you want to see those, go online elsewhere, there's plenty of photos showing what she looks like with all of her accessories.  As for me, I'd rather have her living her life as she waits for Nonoka.  Today she discovered some pansies still growing in my garden out back.  I love how in the Autumn I can cover up her base using a leaf and you don't even know I'm using her stand because it disappears! 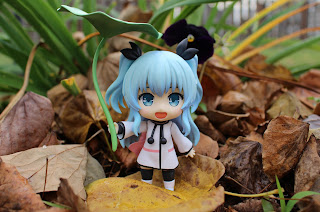 Oh hi!  It didn't rain today, but after watering the flowers I realized that some of the drops had gotten on Noel.  Oops.  But it didn't get her down because she found a leaf big enough to use as an umbrella!  This is her largest accessory (well, that and the space ship) and I'm actually looking forward to posing her later with my Winter 2015 Miku figure because they both are holding leaves and looking like little nature spirits.  But that will come later as I think it needs to get a little bit closer to the winter months to do that.  Noel waits quite a few years for her friend returns, so I wonder just how many winters, springs, summers and autumns she has to wait for Nonoka? 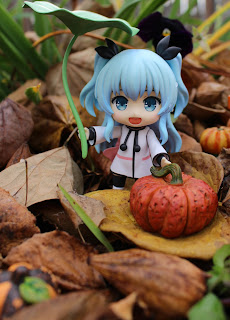 No worries this year though, it appears that Noel discovered a pretty cool thing - pumpkins!  Now you get to see a bit of the accessories that I discovered at the garden center this year (and a few other fairy garden places) and even though it's past the time of year where people normally think of pumpkins (mostly) I thought it would still be a good time since we're still in the month before pumpkin pie season.  Hee hee.  I'm not sure whether Noel would pick up the kobocha in front of her, or the others that are around her.  She seems pretty excited about her find though.  I wonder what she's going to do with them?  I almost tried getting her to sit on one of them for a photo, but that's when I discovered one really odd thing about this particular Nendroid...she wears no panties.  This is the strangest thing I've discovered (and others have noted it online as well) because even for other figures that have no 'panty shots' in their respective anime... at least they painted the tushies white!  But for Noel, maybe it was a rush or maybe on purpose, we're not sure, but she was left skin color below her dress.  We'll probably never know why this was, but it basically has stopped me from putting her in any 'compromising' poses. 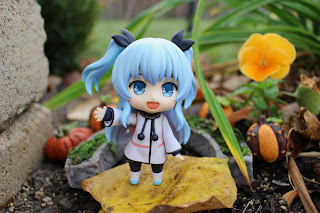 More fairy garden accessories came to play in this photo, but I still love how the leaves cover up any sign of her stand.  And what's that in the background on the right?  Is that her fox friend?  I couldn't quite find one that looked as anime-ish as I would have liked, but I did find a fox that was just about the right size for her.  So at least Noel had a friend to hang out with while waiting for Nonoka to return so she could grant her friend a wish.  She looks so happy out in the garden on a nice Indian Summer day.  Maybe she'll even grant me a wish?
There is something to say about these adorable little Nendroids.  I enjoy their compact size, the fact that they really take on the characteristics of the anime using their various expressions and props.  I did leave one face out of these photos, there's a pouty one that I couldn't quite figure out how to work into these shots, so maybe sometime in the future. 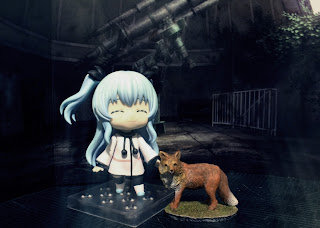 One thing that I do enjoy, is that she came with a background cardboard stand that shows the observatory.  Unfortunately it had already gotten dark outside by the time I realized I wanted to do this shot, so the glare made things a bit odd.  But I liked playing around with it in photo shop and you get so see her fox pal a bit better.  As I said, this one is a bit too realistic for the anime character, but it turned out to be a neat addition in the photo shoot.  And completely by accident as I'd forgotten about the fox until I re-watched the first episode of the anime this evening!  This photo also was something of a mistake because I moved the camera at the last second and it gave sort of a blur effect.  BUT, it came out a lot better than I would have imagined and it fit in together really well.

So, as the last few hours of our Indian Summer wind down to a close, do I regret anything?  I know that now will come winter, now will come the hectic shopping and plans for Christmas, and I really will miss Autumn because it's my favorite season.  These few photos represent my hopes to cling to that season for just a few more days.  I was extremely lucky to have two of the three really beautiful days off to walk around in my bare feet and short sleeves.  One last day in November to pretend that it was still the beginning of Autumn or the end of Summer, because I have a feeling that the Winter, no matter how mild it's supposed to be, will be another hard one on me.

Hopefully my next post won't be all doom and gloom and depression.  But at least I can look back on today's post and smile and remember spending my day outside with Noel.

Posted by Milly Thompson at 7:31 PM