I have just a little over an hour before the day of my fortieth birthday.  Officially it was around 7:35pm, so I guess I have over twelve hours before I would be "officially" forty years old, but it doesn't really matter.  What matters is that in an hour and a few minutes, it will be June 8.  I will be a whole year older, and I'm just that bit further away from where I thought I'd be at this age.
Not only have I reached this milestone, I also feel more worthless than ever this evening. I woke up feeling fairly good, got going and made some awesome blueberry pancakes, coffee, and then watched my email inbox.
I had a phone interview on Monday morning.  She said, "you will definitely hear from us by the end of the week to set up an in-person interview...after I review it with the right people."  My friend who also interviewed for this company had heard back from them to set up an in-person interview within a day, and a week later she had the interview and a day later, a job.  I have heard absolutely nothing.  Four days, not a thing.
What is wrong with me?  I thought I did a good job, sure, I didn't ask a ton of questions because I really thought that maybe they'd be honest with me and say, 'oh you aren't what we're looking for in this particular job but if you want to apply for another one....'  But not even that.  I feel worthless.  I feel like everything that I've done up until this point has lead up to this fortieth year and I have absolutely nothing to show for it.
I don't have the ambition to go for another management job and even if I were to get one I think it would slowly kill my soul.  And apparently I can't find a job in another field, even a stinkin' part time one - and now I'm blaming myself for not doing my second round of interviews at the first place because I feel like that bridge is gone and why did I do that?  Why didn't I just take the damn job in the first place?  Why did I think I was better than $12/hr and having to deal with paying for parking forever??
And no, I haven't been able to get unemployment and no one has bothered to notify me why - or even just a "nope, you can't get it, sorry."  NOPE.  Not a word.  Not a word from anyone. 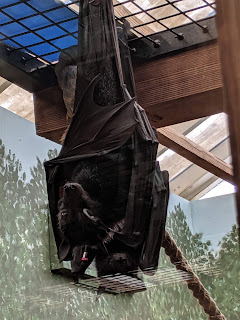 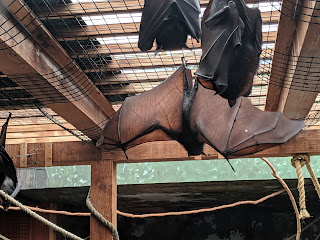 My mom is here this weekend and I slogged through the zoo thinking that maybe that would be enjoyable but because we had like three and a half hours we couldn't do it slowly and we didn't get to see everything and I really couldn't afford it, but we went anyway.

And for a few minutes here and there I was happy.  I love the flying foxes...  Don't you just want to boop that snoot?  These things, without me realizing it, were what inspired the whatchers of my childhood.  Back when I was thirteen and having a hard time in my life, I had a lot of friends but I was also miserable when they were away - I think I realize now that while they were with me I felt good because I wasn't inside my own head, but when they left I was back there with a vengeance and life now is sort of the same in that regard - I came up with this invisible friend "Blacky" and he was basically a flying black fox except my critters had slightly exaggerated ears and a long fluffy fox tail too.  But, anyway, for those bits of time at the zoo yesterday when I took these photos, I realized that I was at piece, and I probably could have spent all of my time there just watching them.
But then I was also miserable because I realized I hadn't received any messages and I'm just getting my business going and haven't sold anything (but I feel I need to get a lot more made and need to do more and that wasn't happening while I was wandering the zoo, so of course that made me feel worse).  And also no one was asking me a damn thing about the interview - had I heard anything?  What was I feeling about all of this?  No one had asked how I was holding up.  Now, a different friend had asked but honestly, I got no response at all back, so it was like...I guess, why ask at all if you don't feel like responding?  Some times all you want is a kind reply, some kind of recognition that you're going through a real hard time in your life and yes, we understand, it sucks.

We got back from the zoo and I was miserable listening to the rotten children next door bouncing basketballs all night long.  I just wanted to go strangle them, but before 11:30 they were finally done.  But then I thought I'd make an online purchase to cheer me up but that only made me feel more miserable too because I have no money coming in and suddenly my entire life it dependent upon someone else and slowly my savings is starting to dwindle because of some damn woman wanting to 'set an example' with me or some stupid thing and I'm just sad all the time now because I don't know whether I should be putting all of my focus on this new project I'm doing or whether it's completely a fool's errand and I'm just going to drown myself in it.

So, here I am, less then 45 minutes away from my birthday and realizing that all of the other years I've had these big plans for my birthday, but I'm also kind of stuck with only doing things that my mom can manage because the zoo nearly dropped her a few times and we were only walking for a few hours!  So my idea of going down to Hocking Hills is off, it was bad the last time we took her but it would be worse now if she was huffing after only a half hour at the zoo...and resting every fifteen minutes after that.  I really feel like I can't afford to do anything else and feel guilty even asking...  In the past we've done all sorts of things and every year I want to go somewhere I've never been before and see something I've never seen to make my birthday a remarkable one, one that I would remember.
But this year it feels fake and sad.  And I was really waiting to get that email saying "here, schedule your in-person interview next week" but didn't get that so after waiting with anticipation and knowing I won't get anything the next two days, and oh yeah, my other plans for the weekend have already fallen through...I just feel lost.

I tried to make up for some of it tonight by a really awesome D&D game and a pizza party and DQ ice cream cake too...but that somehow just felt off too, but probably because most of the day was a lot of hurry up and wait and I had that shadow of an interview that just won't be over me.  And no one asked...  So it feels like I'm suffering by myself.
Then my husband found out my cat has been peeing on things in the basement again and it was probably a combination of him and I moving things so may have destroyed hundreds of dollars of items and I'm staying up to wait for the washer to finish in hopes that we can save the bags they came in... which will hopefully salvage it all... But he's miserable and found it in the middle of the game and I couldn't drop everything I was doing because there were a bunch of people over.  So he was distracted and I was distracted and trying to help because I feel miserable like it was my fault but also just wish I could get rid of this cat that every time we leave alone for awhile we start to feel bad for him but then he makes us get angry again too.

I don't know what to do.  I think the kids have finally stopped dribbling the basketballs.  The washer sounds like it may be on its last spin or so.  I have a half hour left.  I wish I had an answer to all of this.  I wish I could say that I could just put on a happy face and move on.  I also wish I knew if I really had to apply for jobs twice a week for unemployment because it certainly doesn't feel like I'm doing any of it for anything...  THEY screwed ME over.  I didn't do anything on purpose - I worked there for 16 years!!  And now in almost two full months now I can't find a job, can't get on unemployment, and I just don't know what to do.  And here I am... 40 (or rather almost) and I feel like a lost teenager leaving High School back in 1997 with no plans for the future, no job, no colleges lined up because I have no goals in life...and I just want to make things better again.  I want them all to go back to the way they were when everything was RIGHT.  And nothing's right.

Why isn't anything right?