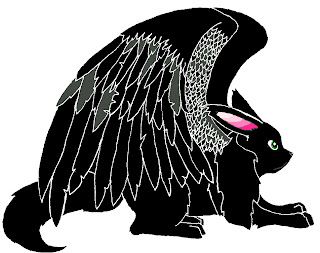 "Blacky" Early Paint Version
After working on some graphics for Tsubasacon this evening I thought maybe I should try actually posting an image in a blog like I keep talking about doing.  So here's number 1.  At least, this is the first whatcher that I scanned in digitally and colored in Paint of all things.  That's before I put money into Paintshop, Photoshop and the Wacom pads and the like.  This was me scanning an image that I drew in pencil into the computer and then reversing the colors and adding a bit of color to the eyes and ears.  I still use the same color scheme for Blacky today since I've always loved how the pink and green stood out on a black critter.

I'm getting a bit confused by what I put on my previous incarnation of this website and the new one, so forgive me if I repeat myself, but the whatcher critter came from a book I worked on when I was a teenager.  I never managed to get it published, although I sent it out to a dozen publishers.  Most of them sent back the copies without even looking at them (many of them stamping it with 'not interested') and I wonder just how many of those they go through a day, someone there in the basement sorting through the mail using that stamp on all of these books, one after another.  I'd even made sure to get the address from the most recent authors publications.  But what I realize now was that the book wasn't even that good, and I have yet to re-read the whole thing myself once it was finished.  I don't think anyone else has ever read the thing in its entirety, not even my husband or any of my friends have asked for it.  I probably wouldn't give it to them at this point anyway, because I did start a re-write of it at one point, and perhaps this is where I'll share it.  If I ever get the book finished, then maybe I'll self-publish it since that's so easy to do nowadays.

Back to Blacky and this sketch.  Originally the whatcher creature was a small hamster-sized critter with black bat wings, short hamster ears and a long mouse-like tail.  The first sketch looked like this: 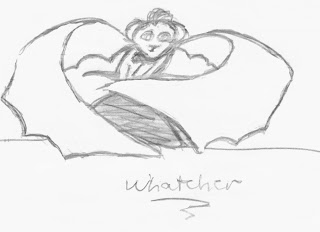 I believe the drawing was done somewhere around 1993/1994.  The whatcher evolved very quickly from this sketch to look more like the one at the top of this blog.  It later evolved into what you see at the top of this site, a more finished specimen that looks somewhat more like Ryo Oki (Tenshi Muyo!) but with wings.  This wasn't really on purpose, although I did watch the show when I was growing up, I had forgotten about the character and decided there was some very obvious differences from whatchers and that Ryo Oki... after all, these critters were telepathic and some of them could even talk. 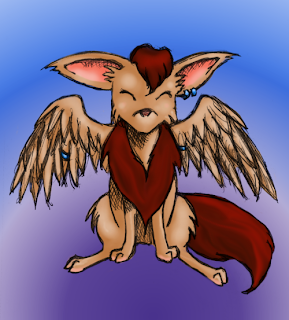 The fun thing about drawing these little buggers is much like the trend right now of drawing My Little Ponies to look like any and every television, video game, and movie character - when you have a cute critter that can talk, you can give them any personality imaginable.  The critter above is named Cleveland and is Native American in origin (hence the turquoise beads).  Cleveland started out at a little ink sketch that I later colored using Paintshop and it's still a rather early piece of artwork from my collection, but I still like his expression.
You may have noticed by now that whatchers don't get mouths drawn in very often (if at all, only when they're eating something).  It's just a style choice that I made early on.  They also aren't entirely anatomically correct, some people comparing their back legs to that more like a horse (so sue me, I used to draw unicorns religiously until my teens) and they only have two toes on each foot.  The reason for this is mainly because they have wings which they use the majority of the time as well as a somewhat prehensile tail for balance, so why would they need more toes?  Heh.
More recently I've been working through ideas of children's books talking about the whatchers rather than the novel idea that I had to begin with.  Whatchers were, afterall, just minor players in the original story line.  Later on they took on a larger life than the other characters and since I draw them better than I do the more human main characters...you get the point.  They're just easy to draw, and that's the reason the studio is named as it is.
Posted by Milly Thompson at 7:48 PM

Email ThisBlogThis!Share to TwitterShare to FacebookShare to Pinterest
Labels: Randomness