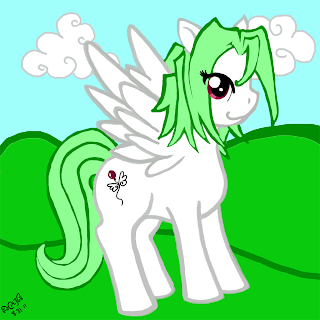 Did I mention that I was reading this article in some magazine in the break table at work the other day and it said something to the extent of, "have fun like you would have as a 10 year old"?  Well, if I didn't, then I guess I should mention it now because lately I've been hooked on drawing My Little Pony since quite a few people at the anime conventions I go to have been drawing them.  I guess if they do it then so can I, right?  Even if I'm over 30?  Hrm... okay, well, someone has to be drawing them to make them into cartoons on HUB right?  Not all of them can be under 30...I hope.

Anyway, what really made me want to start drawing them was a webcomic: www.alexsguide.net who started charging people a few bucks to draw them as a pony.  My friend Jon decided he wanted to get one done for himself in order to support the artist and when we got back to the house he said he'd like to color it.  But I said we should scan it first before he touched the original so once I got it scanned I thought to myself, 'how about I color it?'  So I did: 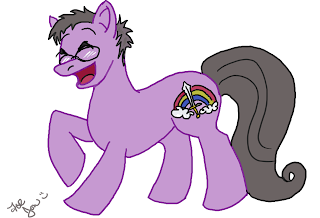 The original drawing was done by Alex but I completely redid the line art and colored it for Jon since it was fun to do and then before I knew it, I had decided to try drawing that first Mitsuki pony that I posted the other day.  Now today I took out my pencil and paper again and did the new version.  It's a bit sloppier than I'd like.  I was rushing but I think the main reason for that was because it just wasn't quite good enough yet to do the full ink and color... if you're an artist you'll probably notice things that are a bit off.  If you aren't an artist... I hope you like it and don't notice the problems!  ^_^;

I decided to record My Little Ponies: Friendship is Magic with my TiVo...I'm currently waiting for them to replay the first season so I can watch the entirety.  I'd really like to see the episode about "cutie marks" - if you don't know what that is, it's basically the butt markings.  Well...dur.  But what's interesting is that when they're little they don't have them, but, well something happens for them to get them but I haven't watched that episode yet to find out!  >_<;  I'll get back with you on it.

What is interesting to me, is that growing up as a kid in the 80's I had a few ponies and over the 90's I collected over 40 of the buggers, which is pretty good since for a time there they didn't even make ponies and I thought they'd stop and I had dreams about finding them in some shop or garage sale and it was just the one I wanted or something.  Heh.  Anyway, when I was a kid when the pony craze was just new they had "horseshoe points" and if you collected so many you could get discounts on special ponies by mail order.  The very first baby I got...I think it was "baby bluebell" or something of that nature (I'll have to look it up someday) and as the very first baby pony made, it was completely bare of any such cutie mark.  So, to me, for that to roll back around and for them to make mention of it on this new cartoon, it's kind of cool to me.

And yes....I went out and bought three of them the other day...  for artistic reference.  Yeah, yeah, that's it.  Applejack, Rainbow Dash and Twilight Sparkle.  I'm trying my hardest not to go get Fluttershy since she reminds me a lot of a pony named Posey that I have being yellow and pink (but she was a earth pony) and one of my all-time favorites.

BOY....I'm kinda pathetic.  When I thought I'd get into another series I didn't think it would be something I was originally into as a 10 year old!!  Ah...but it would make my 10-year old self proud to know I can actually draw them. LOL
Posted by Milly Thompson at 9:22 PM