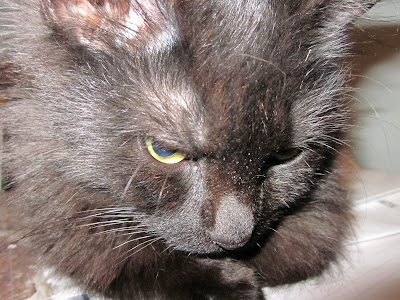 I find it amusing how cats can look pretty angry at certain angles even if they're purring away and happy as can be.  Mina is pretty much always happy, except for when she doesn't want to go into the carrier to go to the vet, or when she's being picked up when she wants to be running around the house.  I've heard her growl a few times, but overall she's a pretty happy cat.  I wish sometimes that it would come through in her photographs, because she really is pretty sweet.

Having two cats in the house is a lot like having two kids.  They have two distinct personalities and two distinct schedules that they run on.  Mind you, both cats want to play first thing in the morning (maybe some cuddles if I'm lucky) and then food.  Then it doesn't matter what you do, unless they're in the mood to play.  Mina will play all by herself.  It's probably because she was a month older than Olivia and out on her own for at least awhile.  Olivia, on the other hand, spent much of her life in captivity with humans playing with her off and on, so she's pretty spoiled.  Olivia will tear up the couch merely because she wants someone to play with her.  She'll attack the blinds if she's feeling you're not giving her enough attention. The couch is taking the most wear, unfortunately, and I've debated the difference in cost between getting claws removed in comparison to getting a new couch.

The problem with Olivia wanting to play all the time is that she won't play when Mina is around.  In fact, she gets downright angry if Mina comes in after the string when she's been setting up for an attack for the past 20 seconds.  Olive is a huntress.  She will stalk string for minutes before pouncing, will come at it from different angles, hiding in different parts of the living room, until finally the right moment and....  Mina swoops in, gets it instead and Olivia makes a "MRAF" sound and walks out of the room, sitting with her back facing the situation as if to say, "Forget this!" 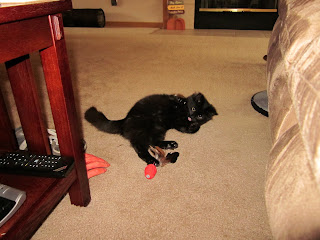 In the meantime, Mina doesn't care.  I don't think Mina really even pays any attention to Olivia most of the time.  Oh sure, she knows she's there, but she doesn't fall for the grumps and huffs that Olivia puts on.  She'll swoop in wherever to play with one toy or another and then swoop out again in order to find something else new to play with.  But...she'll drop whatever she's doing if someone tries to play with Olivia, wrecking the poor cat's concentration until Olivia finally gets angry and hits her with a well placed paw to the face.

Mina, meanwhile, really doesn't care.  She'll chase Olivia around until both of them are worn out, throwing themselves into little piles in the living room across from one another.  Then Olive goes back to scratch on the couch or the blinds and things start over again.

Squirt bottles don't work against this habit.  We even put deterrent on the couch, put a scratching post right next to where she scratches...she knows she's getting our attention and it doesn't matter if she actually won't play when we try to play with her, she's getting attention.

As I said to begin with, having two cats is like having two kids.  The smaller one always looks up to the larger one for how to act, what to do, things to get into, and the smaller ones tend to be the ones that we forgive faster than their older siblings.  It's just the way it is.  Or maybe it's just how Mina plops up in a lap, purring, looks at me with those big round eyes and says, "Hi, I'm cute, gotta love me!"  And Olivia has always been a princess since the day we brought her home.

I'm just glad they aren't real kids, otherwise I probably would have strangled one by now - you should know better!!  Kids push buttons but they have true intelligence.  Cats have smarts of their own but in a different way altogether.  It's all a matter of training I suppose.
Posted by Milly Thompson at 1:14 PM