My husband had to go to work late...as in it's almost midnight late and I've been sitting here going through the random "icanhascheezburger" sites, mostly the original and then bronies and my food looks funny.  Just what is it about these sites that are so appealing that I can sit here for literally hours staring at it when I should be doing something creative?  I'm not entirely sure.  I've chalked it up to being similar to watching hours of home improvement shows on TV or maybe re-watching all of the episodes of My Little Pony: Friendship is Magic or something of the sort.  A year ago I was playing inane Facebook games like Cafe World and Farmville, but I've since stopped playing any of them because even though they were fun up to a point, they really didn't get me anywhere.

I miss the days when there wasn't anything to do on the internet.  Or at least, there was very little, maybe some news to read, some chat rooms to lurk in or perhaps a friend or two to AIM.  But nowadays there's all of this mindless stuff that draws me in and suddenly I don't feel like working on anything really creative.  Well, I take that back a bit, I DID do a pony drawing of the friend who helped me with the brony panel, although I felt kind of out of sorts after doing it because of his initial response to the drawing.  And no one else really seemed to like it...so I wonder if I should have even spent the time to draw it? 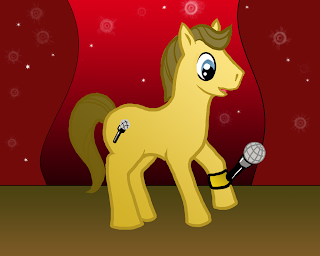 His name's Greggo - he does game shows at conventions an on his YouTube channel - hence the microphone.  He'd mentioned that he'd just discovered recently that his cutie mark would probably be a microphone, and it inspired me to do a little bit of drawing.  This, by the way, is one of the very few completely cgi drawings I've ever done.  Usually I draw everything in pencil, ink it, scan it, clean it up and then color it, but I thought to myself 'you have a tablet, you should be able to do it all on the computer'.  So, I did, and overall, it didn't turn out too bad since I'm still new at drawing the FIM pony style.

But I felt a bit bad about it because when I was doing that, to very little results, I could have been working on story writing or drawing other original things, or perhaps even been writing letters to some important people that I should have written letters to.  Like my brother in California for instance whom I haven't even written since before his birthday in September.

Maybe it's not even the lack of creativity... maybe it's the lack of anyone enjoying the things I do.  I guess when I first started writing my novel with the Whatchers (again, where the namesake of this website comes from) I wrote it for myself.  It was a pretty crappy summer.  I'd just gotten out of my first year in Junior High, and if you've gone through it yourself, you know, it's pretty crappy to become a teenager because that's when you get crapped on from every angle.

Fortunately I was pretty naive about the whole thing, so even as I was being made fun of for being fat and being the tidy one, I was also the loner and even though I made a friend that year, I later found out she felt sorry for me.  Whether that was good or bad, I still haven't quite figured out, but we stayed friends for a long time, even through all of my other friends basically dumped me because I'd found a new best friend.  What is it exactly about jealousy anyway?  I thought I could have a bunch of friends, but new friends and old friends have a habit of not always working out together.  So that summer my old friends all hated me and my new friends were all in Girl Scouts and had camp to go to so I was pretty much alone that summer.

So I asked my aunt if I could borrow her typewriter and I learned to type that summer.  Then I asked for my own typewriter and I started to write my own novel.  It was mostly for me, and partially for my brother who was my only friend that summer.  He really was my best friend until things happened and he wound up in California without cellphone, job, etc... (long story for another time)  Anyway, I wrote it for us, or maybe just for me because I was lonely.  I came up with an imaginary friend and I was quite content to fall back on that novel all the way through school until I finished the novel upon graduating.

And then later I started writing stories for friends I met online.  "Mary Sue" stories were quite popular, although I didn't know it at the time, and I had three friends I wrote into stories for a good few years until we had a huge falling out and I lost all of them.  Those were my Highlander years.  Then I got into Trigun (anime) and started writing fanfiction with a friend for that series.  I still have to complete one of those stories, and it's partially that story that I keep moping about finishing while I'm busy reading about memes online.

But recently all of those fanfictions and fanarts that I used to do have fallen to the way side.  I wanted to do something original, but you have to be good for people to care about those.  Fan stuff is popular but when I pulled away from it I've found myself largely ignored by the online populace.  And now even when I do try to do some fan based stuff, I rarely get any comments on it.  Well, just the fact that I'm working on this blog and at this point I have a whole two followers and one is my husband, that kind of proves the point.  Of course the few of you who are actually reading this, thank you.  I'm trying to learn to write for myself again, but it's nice that you're here for the ride.

Tonight I was sitting reading Trigun Maximum and thought to myself, this is good stuff.  I remember how it made me feel when I was reading it for the first time.  And that's why I used to write fanfiction on it.  And maybe I'll do so again.  There's only just so much pony hairstyling one can do after all: 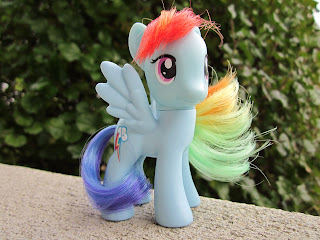 Rainbow Dash turned out pretty good, her hair looks a bit funny but I like it that way.  I even managed to get some of the orange into her bangs.

What's a bit funny for someone my age is the fact that I went into Hot Topic the other day and bought a "This shirt just got 20% cooler" and a Nyan cat shirt. I'm not quite sure what the gal at the counter thought of me, but then again she was pierced to the nines and still wearing flip flops when it was raining with a high of 50 degrees outside... but I don't care, I like the fact that I can wear a shirt about something I love. 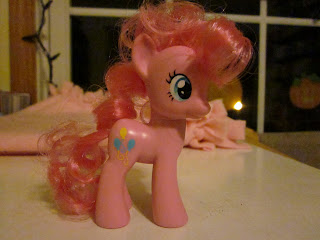 Then there's Pinkie Pie.  Her hair didn't turn out too badly either - her curl is a bit huge, but I like it that way.  It's starting to fall a bit since I didn't use any hair gel or other styling things, but the trick was definitely to cut her hair first before curling because otherwise the weight of all of that hair just pulls the curls into waves instead.

What in the world am I doing anyway?  I'm not sure why I'm this age and yet I still surround myself with toys and goofy things... they make me happy, mind you.  And maybe it's because when I work I get enough of the adult crap out of the way every single day, so the only way I can relax is to be goofy and young again.  Capture that childhood over again...who am I kidding, I've never stopped.

I can't have kids, I wouldn't be able to stand sharing my toys with them.  Heh heh heh.

Nights like this, staying up late and just wondering why the heck I should write stuff like this to post online... I guess once in awhile it's good to get it out and put it out there.  At least to do it for myself.  I need to be happy with myself first, right?
Posted by Milly Thompson at 12:25 AM