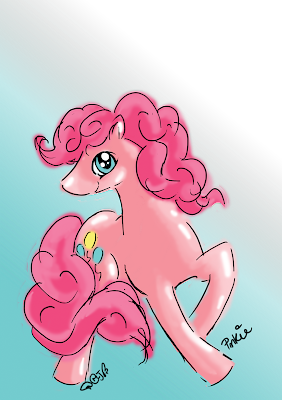 If you haven't watched MLP:FIM, then you probably won't get the pink pony drawing.  BUT, if you HAVE watched the show, you'll know who Pinkie Pie is.  She's not my favorite pony in the series, but for some reason I felt like doing a quick sketch that was kind of free-flowing and very different than the actual style of the series.  I have my own kind of drawing style normally, but I some of my style from the early anime styles I used to read like CLAMP and Trigun, and throw in perhaps a random shojo manga here and there too.  It's kind of fun putting a character into a different style all together.

So I was cruising the "Brony" meme site on the icanhascheezburger site (if you've been there, you'll know what I'm talking about) and saw a link to IMDB and the television series.  So I put my rating in for the show and there was a bunch of information.  So, it really is true that the majority of the (at least those who can access the internet) fans are males in their 20's or so.  Females in their 30's (like me of course) are actually a very low number.  Now, I kind of wonder whether that's because many women my age who might be fans are fans because of their children, and they don't have time to be going around online voting for cartoons.  It's a theory I have, but at least my name is in there somewhere so they know I'm a fan too.

The strange thing, and I know I've said this before, is that most women my age grew up with My Little Pony in its original incarnation.  I'm proud of that fact, but not in a creepy 'hoarder/white trash' kind of way.  If you've ever met someone like that, you know.


I just can't grow up.  Okay...WON'T might be a bit more accurate.  Sure, I work my 40 hours, I do my manager stuff, I try to be all professional from time to time.  I pay my bills, I take my cats to the vet, I clean the house...but my house is filled with posters of cats and anime and cartoons.  I have a shelf in my master bedroom of stuffed animals that both my husband and I have collected over the years.

I'm not sure why Pinkie Pie was the first of the ponies I drew in this style, but I'm thinking of trying a few more soon, so keep your eyes peeled.

More weirdness to come.
Posted by Milly Thompson at 4:08 PM