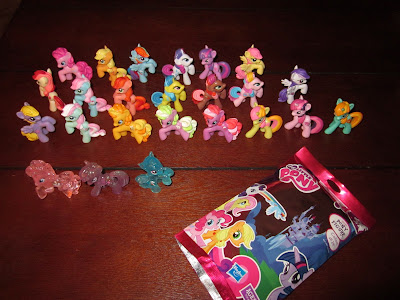 So, according to polls, I'm the minority when it comes to Bronies since I'm female, over 30, and also married.  Only 3% of Bronies aren't single, according to a poll I read online today.  Go fig.  Maybe it's because the majority of people who are my age, female, and married are probably too busy worrying about what their kids want to watch rather than what they do...

And yet, here I am, a grown woman, going out during one of my days off in order to search for these elusive blind bag sets of ponies.  My first round was actually pretty successful even though I didn't know there's a numbering system to the bags.  If you want to collect these ponies too, just know that on the back flap near the top there's going to be a little number which you can match up to the picture on the back to see which pony you are getting.  (I have them here in this picture in order, 1-24)

The first two trips, I didn't know that there was a numbering system, or at least, I hadn't figured it out yet, but I managed somehow not to get any duplicates.  Then I started my quest to find more this weekend once I'd discovered the secret and managed to get every single one, no duplicates, at the local Walmarts (and I can say Walmart-s because I went to four.) 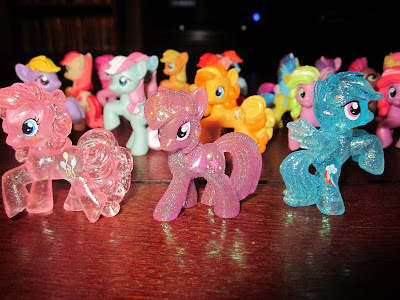 Anyway, as this blog is also about Ohayocon, I'll put a note about that in here as well since there were dozens upon dozens of pony cosplayers, which I may have joined with provided the bad experience I had would have been avoided.  I'll explain that more later, plus I saw a dealer selling these blind-bag ponies for $4-$5 a pop when you can get them for less than $2 at Walmart.

Ohayocon started out really well, we had a table in the dealer room for Tsubasacon so we were able to do some advertising, but our guy with the flyers and the sign poles didn't get there until late so I spent most of my day trading off to wander through the dealers and buy stuff I probably shouldn't, have, and then later we did a bit of advertising before heading home for the evening.  I took pictures of pony cosplayers and found out that they were going to be at the various brony get-togethers through the weekend.

Saturday was a mixed bag.  It started out snowing outside, but I wore my Mitsuki outfit anyway, froze my butt off for awhile, but it was all good, because I had a lot more interest in our booth because of it.  Then a Staffer came by - biggest a$$ of all time because the bugger told me that we couldn't have some of the things we were selling out on our table!  For over 10 hours on Friday we had those same items out and I'd already sold some of them, no one had said a thing.  Then suddenly he's threatening to kick us out??!~  I took down my 'questionable' items - aka my foamie wings and earrings - all wing designs and all "official" Tsubasacon merchandise even though they didn't have the Tsubasacon logo on them (ahem, another table also had t-shirts on their table that didn't have their logo!!)  but I left my sign out talking about them and managed to sell one of the pairs of wings (helped I was actually wearing a pair myself - ha!) - thumbing my nose at the law, that's what I'll do!

But there were a whole heck of a lot of grouches at Ohayocon this year.  Mind you, not everyone, there were some really nice staffers I met and were really helpful, but then I even had an artist alley guy yell at me for being too close to the glass in the alley...I was THREE feet away, couldn't even touch the glass, and had my hands clasped in front of me and the guy yelled at me!  I'll tell you what, jerks like that don't deserve to sell artwork, little lone make any money for being an idiot.  Well, I'll show him, I bought a bunch of prints from another gal who actually designed the cover for a journal I'm writing in at the moment and I was so excited that I was able to meet her after looking at her artwork for over a year now.

Okay, so as I said, pretty mixed bag.  The first guy who yelled at us made me go into total breakdown mode and I decided not to go back on Sunday.  But Saturday when we had closed down for the night and had our dinner, I thought I'd see if the brony meetups were still going on, but the areas they were at were surprisingly empty...so I just started walking and somehow mysteriously stumbled onto a MLP showing.  My husband couldn't believe it, because he'd just asked me where we were going and I was like, "I dunno, I just want to go this way..."

We later found another friend we hadn't seen in awhile doing the same thing after I watched the newest episode of MLP...but that's another story.

At least all the money I made at the table before the idiot closed me down paid for my blind bag splurge!!  ^_^

Posted by Milly Thompson at 8:15 PM