This is my short (ish) and silly review of the My Little Pony: Friendship is Magic Android version game.  I'd heard about the game from a few websites like Equestria Daily, and when the Android version popped up I downloaded it to my Galaxy Tab 7.0.  I've pretty much been playing it since and have gotten up to level 32 at the time I'm writing this.

The first thing that struck me was the fact that they had gathered some of the original voice actors for some of the ponies, I'm assuming all of the mane six, although I haven't gotten Rarity, Fluttershy or Rainbow Dash yet, they even had Spike, Mrs. Cake, Celestia and Nightmare Moon, so I was impressed by that.  Of course, after the initial voices, the rest of the cast pretty much fall off.  However, all of the favorite ponies are there, Lyra, DJ Pon-3, "Time Turner", and Octavia.  Of course, that's only if you can afford them or happen to run into a glitch here or there when you can get them reasonably.

Playing the game is relatively simple, if you follow the missions you pretty much learn how to do everything that you need to play the game.  The rest is pretty much repetition, and as anyone who's played Farmville or Cityville or Cafeworld or any one of those games, it's all about setting things up and gaining money to buy more stuff and expand Ponyville.

What's different about this game from the others I mentioned is that there's a story line and goal to expanding your Ponyville, and also the fact that each pony levels up by playing Mini-games. 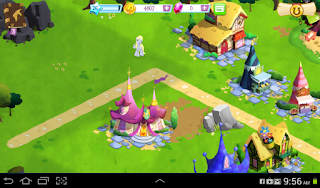 The downside to playing a game so early in development is the same as with others I've played in the past, there are glitches.  Sometimes the game will freeze up after a mini-game, sometimes crashing the program.  Other times the game won't refresh and I'll be grumbling that I'd unlocked Fluttershy but it's not actually unlocked until I turn it off and reset it.  Another glitch, which is a big one, is that the social side of things just doesn't work at all.  I've heard of a lot of others who have had this problem, so I know it's pretty extensive.

Then there are fun glitches.  My favorite glitch right now is that even though I don't have ponies in all of my shops, they're still producing stuff and I'm getting coins from them.  Two days ago they had an accidental "sale" for "two days" which turned out to be an hour or so, where a few of us were able to get ponies like Scootaloo for real cheap, so that turned out to be pretty nice.

I'm also enjoying the fact that you have to find Derpy hiding around Ponyville.  She's usually two eyeballs in a box.  When you click her she'll appear for a little while and do a little fluttering around and dancing.  She also has a very unusual expression where she looks all mad for a second...  Not sure what that's about.  Maybe because you aren't paying her enough attention?  ^_^  What's interesting is they always talk about "that pony".  So even in a game where they've got Time Turner (Dr. Whooves) and DJ Pon-3, they still can't acknowledge my favorite pony. 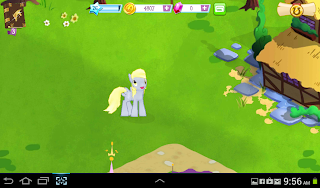 I also have another gripe, or maybe it's done on purpose, but here's a tip if you play the game.  The Flour Mill, Cherry stand and Lemon stand are your money earners.  The rest are HUGE ripoffs in your town.  For now, avoid putting ponies to work in anything else (except maybe the Bookstore and Apple stand as last resorts).  Pile your ponies into the Flour Mill first, especially at the beginning as you're playing because if you're sitting there for a half hour on the game you'll net about $1,500 or so of coins just by clicking on it once a minute.  The Flour Mill with three ponies will get you about 52 coins a minute.  The cherry stand and lemon stand are around 52 coins, then it drops off drastically to 9 or even 5 coins a minute.  The only time you should have ponies in those other businesses is when you'll be away for awhile and then you can collect one big lump sum after logging on a few hours later.  But if you're going to sit there playing, it'll do you a lot of good to avoid those businesses.

And...if you want to friend me I'm under "MillyT" on Gameloft....but don't cross your fingers for chests because I can't get to anyone yet.  >_<;

It's still fun, and I'm kind of looking at this game like I'm in Beta Test mode rather than in a finalized version of the game.  I guess if you look at it that way, even a buggy game like this one can be fun.