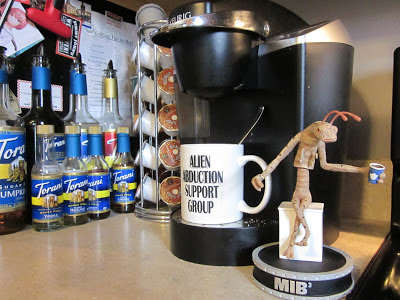 I don't have licenses to any of the stuff you see in the right...I just wanted to show off my "coffee counter".  I'm not a huge coffee snob by any means, and I don't have to have the cup of joe every single day either.  It's just nice sometimes to have a cup now and again and it helped when my mother in law gifted us the Keurig a few years back.

At the time of the Keurig, I really didn't think it was going to catch on like it did.  Having to use one little disposable cup per cup of coffee?  Specialized machine?  And it's how expensive to buy a box and a machine?  Well, it certainly did kick off another world of coffee making devices, and this one is one of the earliest machines that came out.  It's still working fabulously, sans an occasional bad k-cup, but otherwise I can have a cup of coffee in less than five minutes if my heart desires it, so it's grown on me.

For those of you in the "coffee club" and perhaps also a member of the "sci-fi" club, you'll recognize the little worm from MIB (in this case it's a bobble from the trilogy BD set) drinking his cup of joe.  I really thought it was a fitting addition to the coffee counter.  They never really went far with the worms on the movie.  The first movie they were pouring coffee, then leaving the planet with smokes and that was it.  Second movie the princess ended up staying with them awhile, but no coffee.  The third they were around a bit but not all that important.  What's funny though, is that if you're like me, you'll remember them having a much stronger 'coffee presence' at one point or another, and that came from the MIB cartoon series that was on for quite awhile.  The worms were almost always drinking coffee (probably because their other vices, cigarettes and alcohol weren't allowed on a children's cartoon) so if you ever caught that series you'll know what I'm talking about.

My history with the coffee cup began at an early age.  I know my mom always loved to drink her coffee, and I'm not sure when I first started to be able to order my own cup of it in the mornings.  It was pretty early, because I do remember on the first day of Junior High, I remarked to my mom that I would like to start having coffee in the morning because I had to get up so much earlier than I used to in Elementary school.  So it was probably around 12 or 13 when I first started having coffee fairly regularly.  I even introduced a JH buddy to it at her Dad's birthday party by showing her how to mix up a good cup using cream and sugar.  At that point she was mostly into Moon Mist and other caffeinated soft drinks.

Coffee was a fairly boring thing though until I reached about college age.  I used to call where I lived "The Town Starbucks Forgot" because it wasn't until after college we got our first real, stand-alone store.  Before that point we had to go probably an hour's drive to visit a Starbucks, and even though there was a little kiosk in a local Hudson's (later bought by Macy's, basically the same store) it really wasn't the same.  There was a couple of fancy coffee places around town, one was "The Coffee Beanery" which I didn't realize until later was actually a chain.  It had perched itself next to a bookstore called "Young and Welshen's" in town and eventually they even opened a doorway between the two so you could have coffee and books.  But I never really partook in that until a few years later when Border's opened across the street, driving that chain closed and then moving the "Beanery" down the street into the mall.

HOWEVER...don't mistake me, even with these coffee options available, I was a poor college student who was working as many hours as I could and paying my way through.  Most of my money went to the cheap vending machine cappuccinos and lattes.

A friend of mine whom I met online introduced me to my first freshly ground, brewed through a natural filter, real cream, real sugar, in a pretty little coffee cup.  It tasted so completely different than the Folger's and Maxwell house I'd pretty much grown up with that it was a special treat every time I had it.  And even now, to this day, I can't quite copy the supreme coffee mastery she had, even grinding my own beans and using all of the same ingredients.  She had a touch with the ordinary cup of coffee.

Fast forward years later when I first moved in with my soon to be husband.  He drank tea.  He wouldn't touch coffee until I got him to taste a sip of mocha here and there.  And even then he'd never actually drink an ordinary cup of coffee.  But then came the Keurig.  Then came the coffee grinder and the Starbucks cards and the Caribou Coffee and the local Stauf's.  I actually think it was the local Stauf's that was the final nail on the coffin for him.  Most specifically the "Highlander Grog" and "Snickerdoodle".  When he found out you can flavor coffee before you even brew it, and it doesn't taste as much like coffee...I think that did it.

Since then we've both become low-level coffee snobs.  We won't drink the extremely cheap stuff and we both like to grind our own.  We have Keurig for when we're too lazy to do it.  Heh heh.  Coffee left on a burner for hours?  NO.  Coffee made from something out of a can... Most likely no, unless it's freshly opened.  Gas station coffee?  No way!  And we're both gold card members for Starbucks...

Posted by Milly Thompson at 9:55 AM

Email ThisBlogThis!Share to TwitterShare to FacebookShare to Pinterest
Labels: Baking and Cooking, Restaurants