If you've never been to my house (which, most likely you haven't) you'd notice that I decorate with a lot of cats.  I've got cat figures, cat pictures, cat lithographs, cat statues, cat frames...well, you get the  idea.  Point being, my favorite display of cats in my house are the photographs I have taken of my own cats.

If you have multiple cats like I do (or dogs, I suppose heh heh) and you want an instant conversation piece, think about displaying pictures of them in similar frames together on the wall or on a bookshelf somewhere.  Closeups of our furry friends are very beautiful, and even though they might be a bit difficult to get at first, the final product is extremely satisfying. 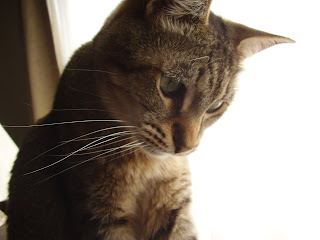 Photographing cats can either be extremely easy (if they love to lay in the sunshine and sleep) or extremely difficult (if they're in constant motion and like to hide).  So it's always a challenge when it comes to getting that perfect portrait of your favorite cat in the household. 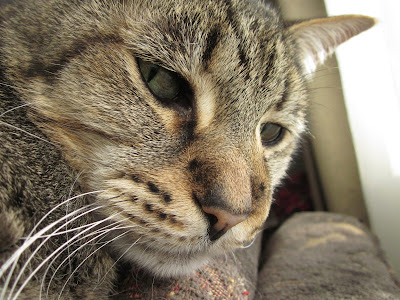 My first cat photograph was of my Mom's cat, Alex when he was around 8 years old.  Alex is now around 14 years of age, but still plays around like he's a kitten.  Thankfully, even though this striped tabby is in constant motion (especially when he spots a wrist strap on a camera like he did in this photo) he also loves to sleep in sunny spots.  The different stripes and gradations of his fur, and his beautiful yellow-green eyes pick up the light for just about any photo I've taken of him.

The second photo of Alex shown here was taken this Christmas when he was going on 14 (as of January 6th or thereabouts).  The camera has changed, but Alex still has always taken to having his photo taken and will usually give you a fair number of opportunities for a good shot to be taken.  If you have a cat like this, you're lucky! 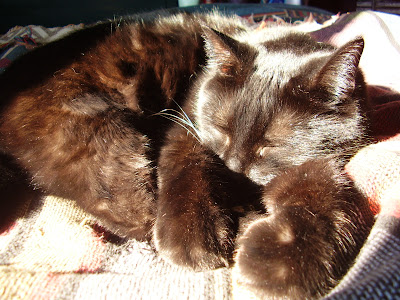 The second cat I photographed was my Neo.  He's been deceased now for about three years, but I still have his photograph on my wall because he was a dear, sweet pet and an awesome companion.  Neo also loved to sleep in the sun, but because he had deep dark brown fur (you'd call him black normally, but with all "black" cats they very rarely have actual black fur, it's usually very deep brown), it was hard to get a good shot of him.  Dark animals such as Neo should be photographed when they're in good lighting and you have to be patient for a good photograph of them at times.  You'll see what I mean later when I show you a picture of my other black cat, Mina. 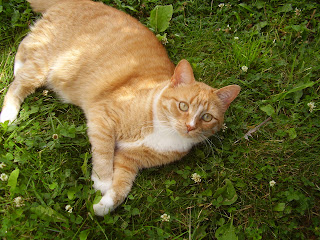 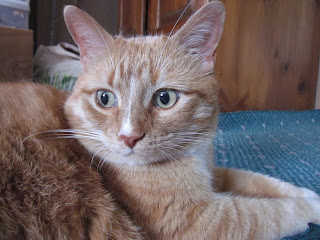 Obviously, lighter colored cats, cats with stripes, etc, all pose their own specific challenges when taking photographs.  Take my husband's parent's cat, Maggie, for example.  Maggie can have her picture taken in sun or shade (as you can see here, slight shade is preferable since sun tends to make her washed out), however, Maggie is an ornery cuss.  You wouldn't know it by this photo, but the next day she swiped me across the face with her claws because I leaned too close to her to look at her without my contacts and she didn't like me looking at her 'funny'.

But closeups don't have to be close, as long as they are clear and have an obvious subject.  Don't aggravate your animal too much when taking photos either.  If they're starting to get irritated, stop, wait for another day and try it again.  Maggie, for example, will start to growl and swipe if you try too many times.  I've spent many trips to my In-Laws trying to get another good shot of her without much luck.  In my last attempt she started to give me 'crazy eyes'...so maybe next time!

Obviously lighting makes a big difference in photographs you take of your animals.  A nice sunny day will probably produce better results than a a shady one.  But we won't go into it too much because I'm not a professional photographer, I'm just a novice who likes to take pictures of cats.  So, if you aren't happy with a particular picture, wait until you get one that you're really happy with before hanging it on your wall! 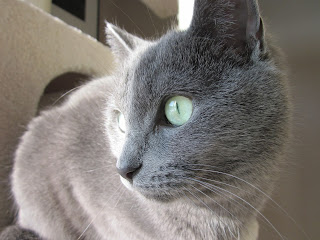 Olivia is my first cat in my new home.  She is solid gray with light yellow-green eyes.  She photographs extremely well when she's sitting still.  In this shot she was in her cat tower watching for birds out the window.  I'd recommend getting a bird feeder if you want good shots of your cats being still.  There is nothing like a cat holding still to try and pounce on a bird that can get you a good opportunity for photographing them!  They'll hold still in sunshine for minutes on end, and even if you irritate them a bit with your constant nagging with the camera, they'll tolerate it to get a chance at that next bird! 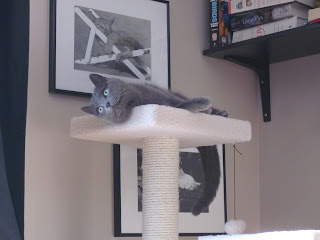 As I mentioned before, cat photography doesn't have to be close up.  The idea though, is to capture a moment that really defines your cat's 'essence'.  Okay, this probably sounds stupid, but what does your cat (or dog, this works for both I swear) like to do most?  Do they lay around or do they catch frisbees?  Do they scratch up chairs or roll around on the floor a lot?  Catching them in their natural state might be difficult without a good action shot camera, but give it a try.  It might take a good many photos to capture them in that 'just right' moment, but it can be done, and it's worth it.  Especially in the age of digital cameras, just snap and delete away until you get just that moment of awesomeness.  The photo of Olivia on her stand was one of these special moments for me because she reminds me most of "Happy Cat" in it. 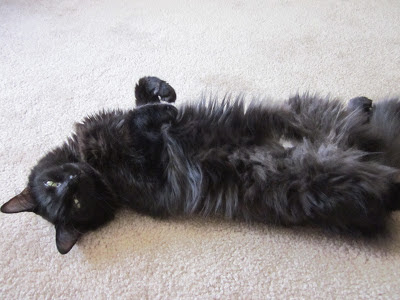 Now, lastly, the hard pet to capture a photo of.  You'd think a cat that likes to lay around like this would be easy to take a picture of, right?  Throw in the fact that the moment the camera comes out, Mina is running around after the camera cord, or she's running off to plop down somewhere else, or if you get near her near the door while bird watching she's off to see something else...well, this is where that patience I was talking about with Maggie comes in.  You can have a loving, adorable pet who will come right up to you in numerous situations, they can get right up there in your face, and yet, you can't take a clear picture of them if your life depended on it! 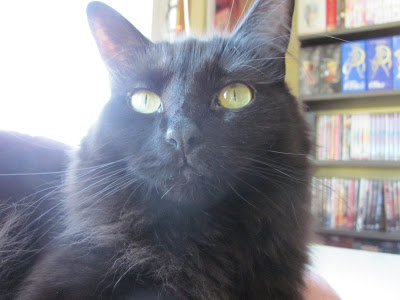 Mina is definitely THAT pet.  My husband and I used to joke when we first got her as we'd show each other photographs of spaces of empty floor, "this was where Mina should have been, but she moved."  Or "this is a picture of Mina's ear" or "here's her tail".  Yeah, you get the picture.  If you have a cat who likes to hide a lot, I'm sure you know the feeling.  You might love them to pieces, but sometimes you just want to glue them down!

Even when Mina is sitting in the sunshine, she's extremely hard to photograph.  As you can see by this photo, she's different than my first cat Neo because her hair tends more toward black/white/gray than it does brown.  Her 'mane' or ruffle around her neck is a bit more brown, but she has little white hairs throughout her body and if you pull out her tuffs they're a dark gray rather than brown.  It makes for very difficult photographing.  As you can see by these photos, I'm still trying to get that perfect shot of her.  However, I did give up just recently and use the bottom photo as one I have on my wall.

Try it for yourself.  Especially if you are a pet lover like me.  Make your own calendar, send out picture cards, etc.  Just... don't take pictures of them in hats or clothing.  PLEASE.  And the reason I say this isn't because I'm against dressing up animals.  I've done my share over the years too.  No, it's mostly because, just as with humans, certain styles of clothing will date a photo more than anything else.  Capturing an animal the way they are most of the time around the house, that will make a better artistic display than putting a hat and cape on your dog.  (Unless they're a shi tzu and they're always wearing a bow to keep their hair out of the eyes...then well, maybe.)  You may not believe me, but try to trust me on this one, you'll be happy if you do.

Feel free to send me your own cat/dog photos.  I'd love to see your closeups too!
Posted by Milly Thompson at 6:28 PM