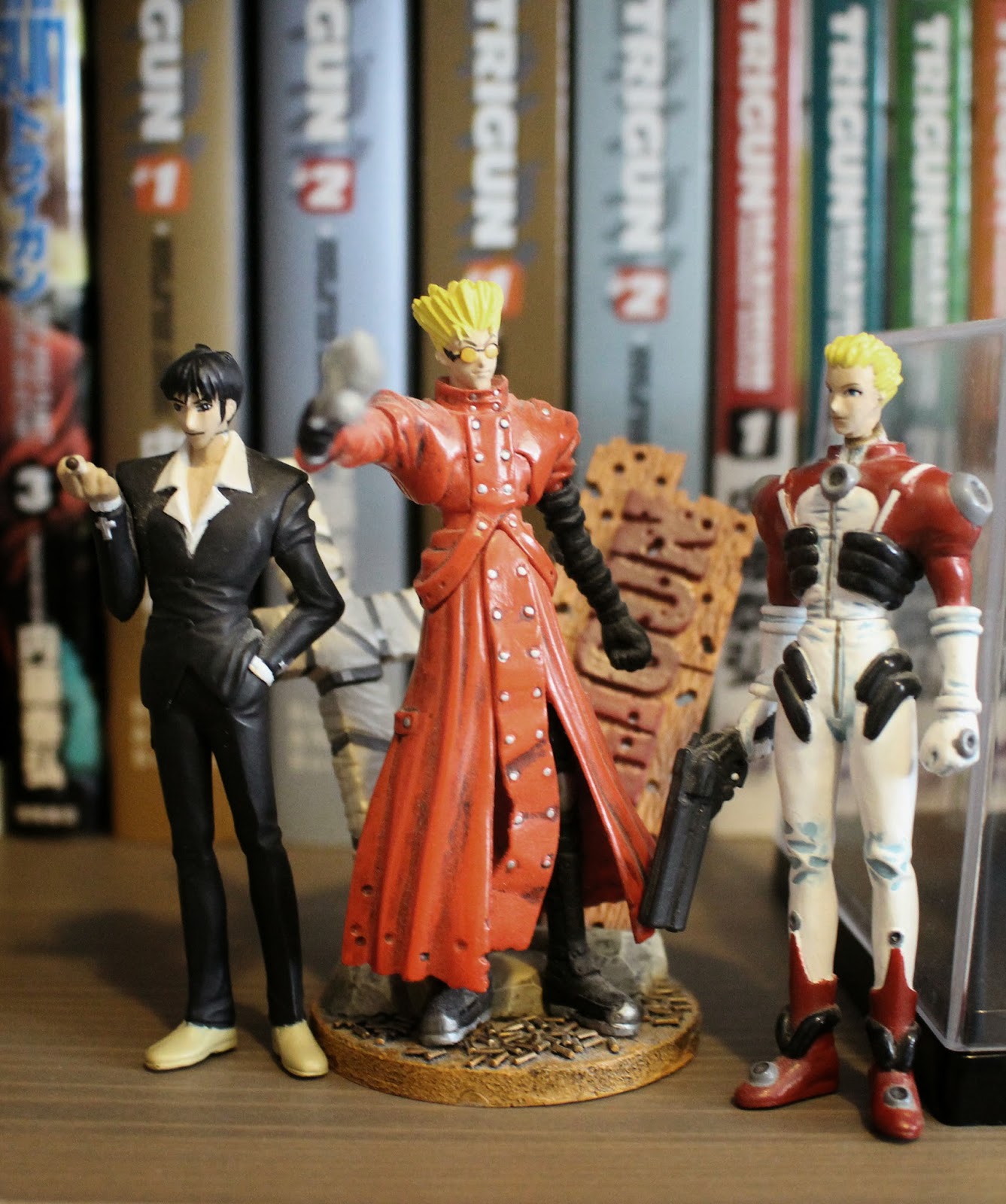 After spending a ridiculous amount of time watching vlogs about people opening figurines, showing off their collections, reviewing figurines and even pointing out the differences between bootleg figures and the real, I decided to start my own series of blogs on my own collection.  Since I don't own video editing software (although I'm sure my husband would love to get me into it if I asked) I'd much rather write since that's why I went to college.  Plus, with my super camera, it's awfully fun just to take pictures of the figures I've collected over the years.  Plus it's just a fun trip down memory lane.

I hesitate slightly to say that the Trigun figures to the right were my very first anime related figures.  I think they were, unless you count various Pokemon or perhaps a random other series.  These were, however, the first figures I bought at an anime convention.  Rewind the years back to 2004 in January near the beginning of the year when Ohayocon first moved to the Columbus Convention Center.  Well, more accurately the convention space at the Hyatt, as they weren't really big enough to expand into the convention center itself.  They had the dealer room in a banquet room across where then was only a row of windows letting onto a circle drive where people could be dropped off.

For giggles, here you see the back of my head as I was dressed as Milly Thompson from the Trigun series.  Behind us (unbeknownst to me) a rather popular cosplay photographer stood on a chair as my photo was being taken with a Wolfwood cosplayer by a Chii and Witch Hunter Robin.  Those were the days!  Fewer people cosplayed then just attended in normal clothes, and there was less anime you could easily get your hands on, although that would change in the next few years.  At the time, there were very few figures you could get without buying them at a convention or expensively getting them shipped overseas by someone sketchy.  I'd imagine a lot of the figures were either very cheaply produced (like my Trigun figures above) or super expensive. 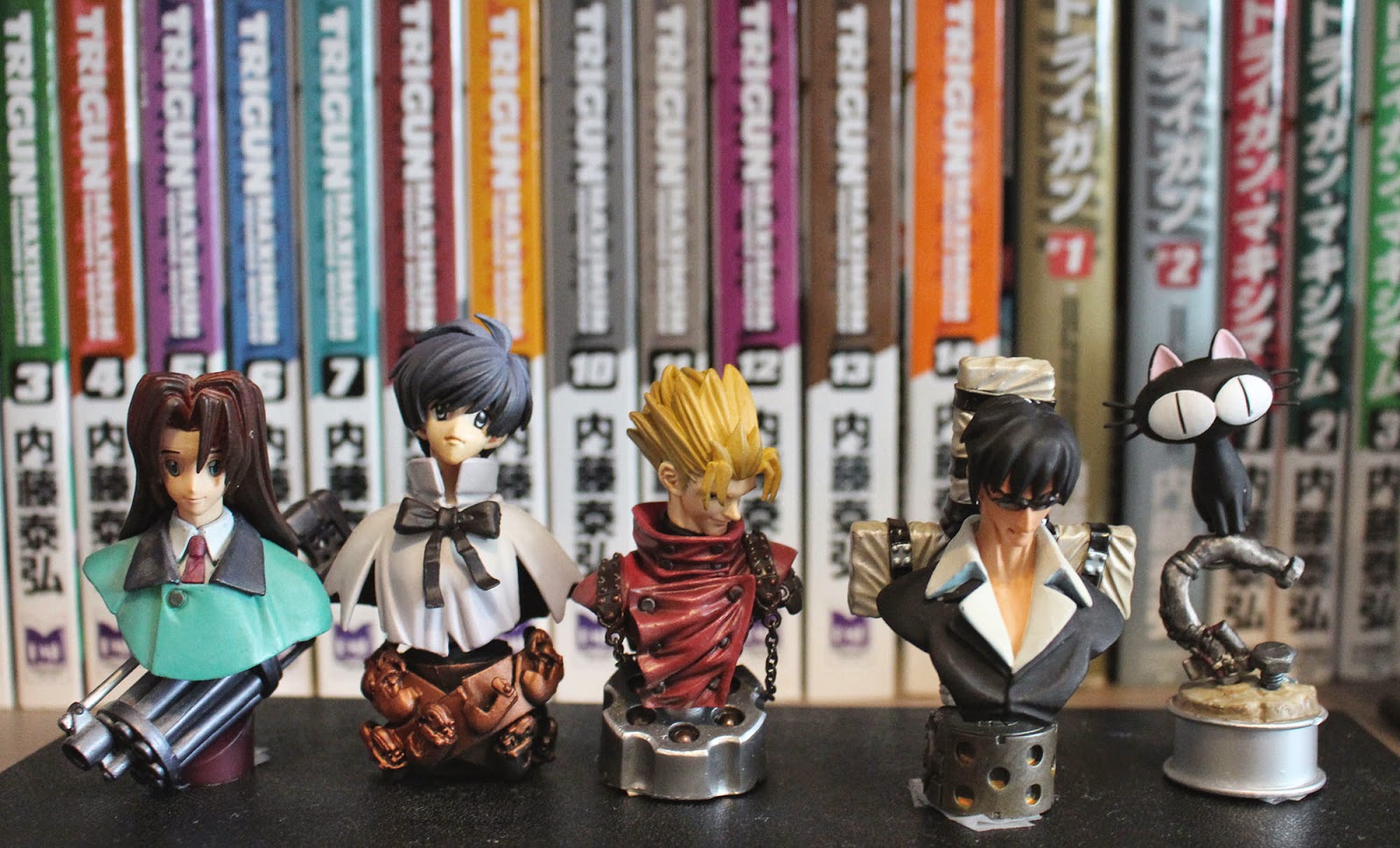 Back to when I bought these figures.  So when I first walked into the vendor room I was by myself, only a little over a $100 in my pocket for three days of spending and food (I had a debit card but no credit cards at the time...or rather, most people didn't take credit in the dealer room then!)  And the moment I walked in a guy in a booth called me over and said, "I know what you're looking for!"  He pulled out a plastic bag and shoved these figures at me, as well as another bag with the mini-busts to the right.

Well, more accurately, only the Milly, Wolfwood, Meryl, a Knives, and transformed Vash, I'd later get the rest of the series through much searching.  At the time the sets cost me $40, and I willingly shelled out the money before I realized I would be stuck eating one meal a day the rest of the weekend.  Was it worth it?  Totally.  The guy who sold me those figures still runs the circuit and I see him at Ohayocon and even Tsubasacon (he's out of the Columbus area, Anime Palace if you've ever met Wade, you'll know who I'm talking about).  I'm still amazed to realize that there were some hardcore anime fans who really loved what they did and wanted to share what they knew with fans.  I was a fan of like three series at the time: Trigun, InuYasha and Chobits.  Only later did I start collecting more figures and getting into more series as it became easier to pick up at local stores like Best Buy. 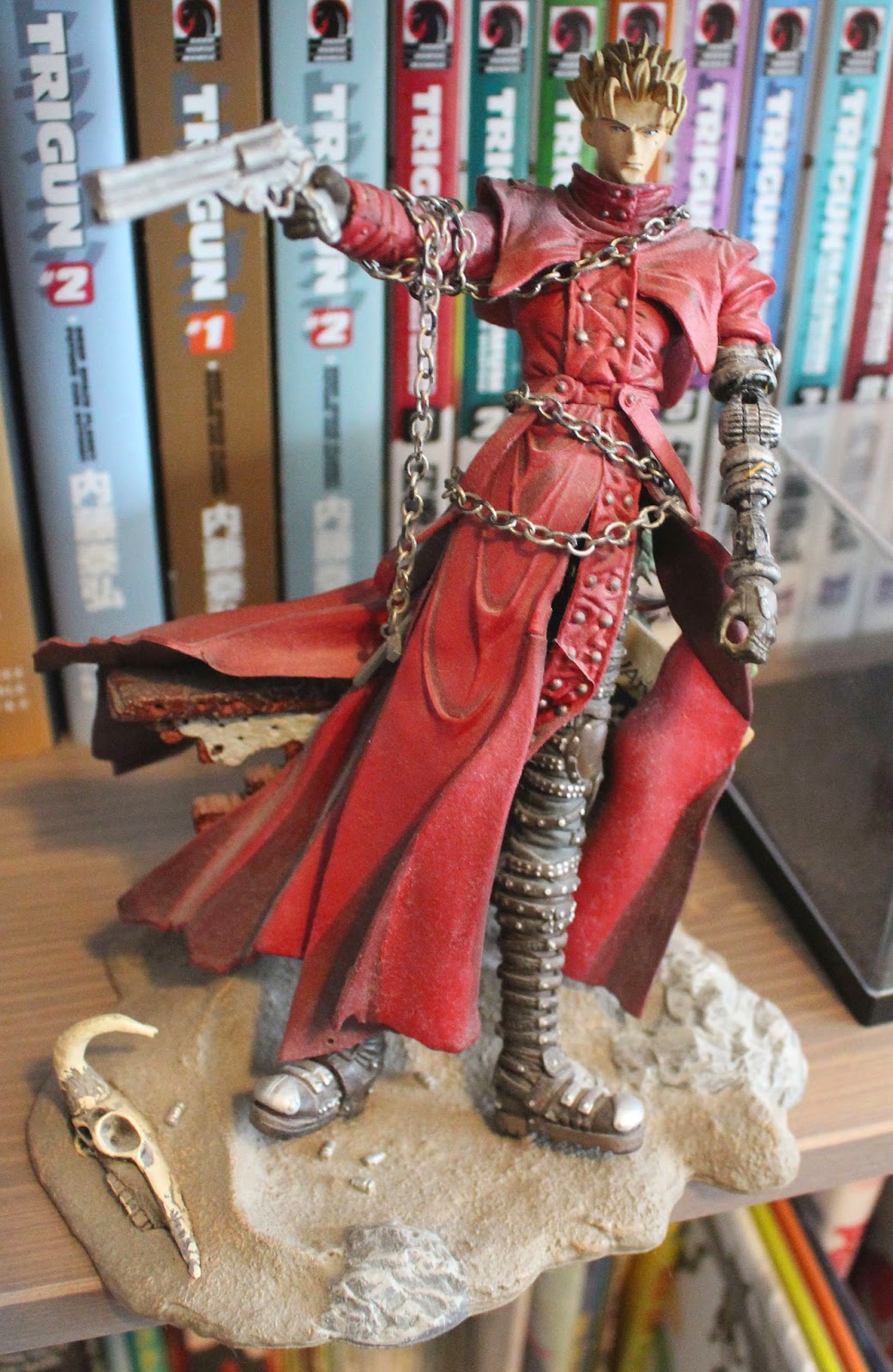 Now, the little figures (gatchapon mostly) were fairly easy to come by at conventions.  However, if you wanted a more expensive one, well, you had to plan for it and it was still pretty hard to get them online because many of them would charge as much for shipping as the figurine themselves.  Or maybe you'd have a friend like mine who just happened to have a Vash figure that they didn't want anymore.

This beauty (although I think this particular one might be my husband's...we have a couple in the household now) was bent backwards, missing some parts, but oh gosh I wanted it so badly that I ended up getting ripped off by a couple of friends who wanted to unload it since they were strapped for cash.  I think I paid $60 for it (and for awhile you could find it for $30 until it became a bit more rare but still costs only around $40 on eBay).  It was one of those figures that I both loved, but also hated because I had mixed feelings on how I came to acquire it.

At the time the McFarlane figure was the only one available directly to the United States, and it would be a year or so before the other sets would be released, but the popularity of the other figures didn't last very long since only the busts covered the majority of characters in the series.  Quite a few were produced over the years and the older photo here doesn't have all of my figures, but since I didn't feel like pulling them all down and dusting them off, I thought I'd just put this up here to finish out talking about the first set of figures that I've collected over the years. 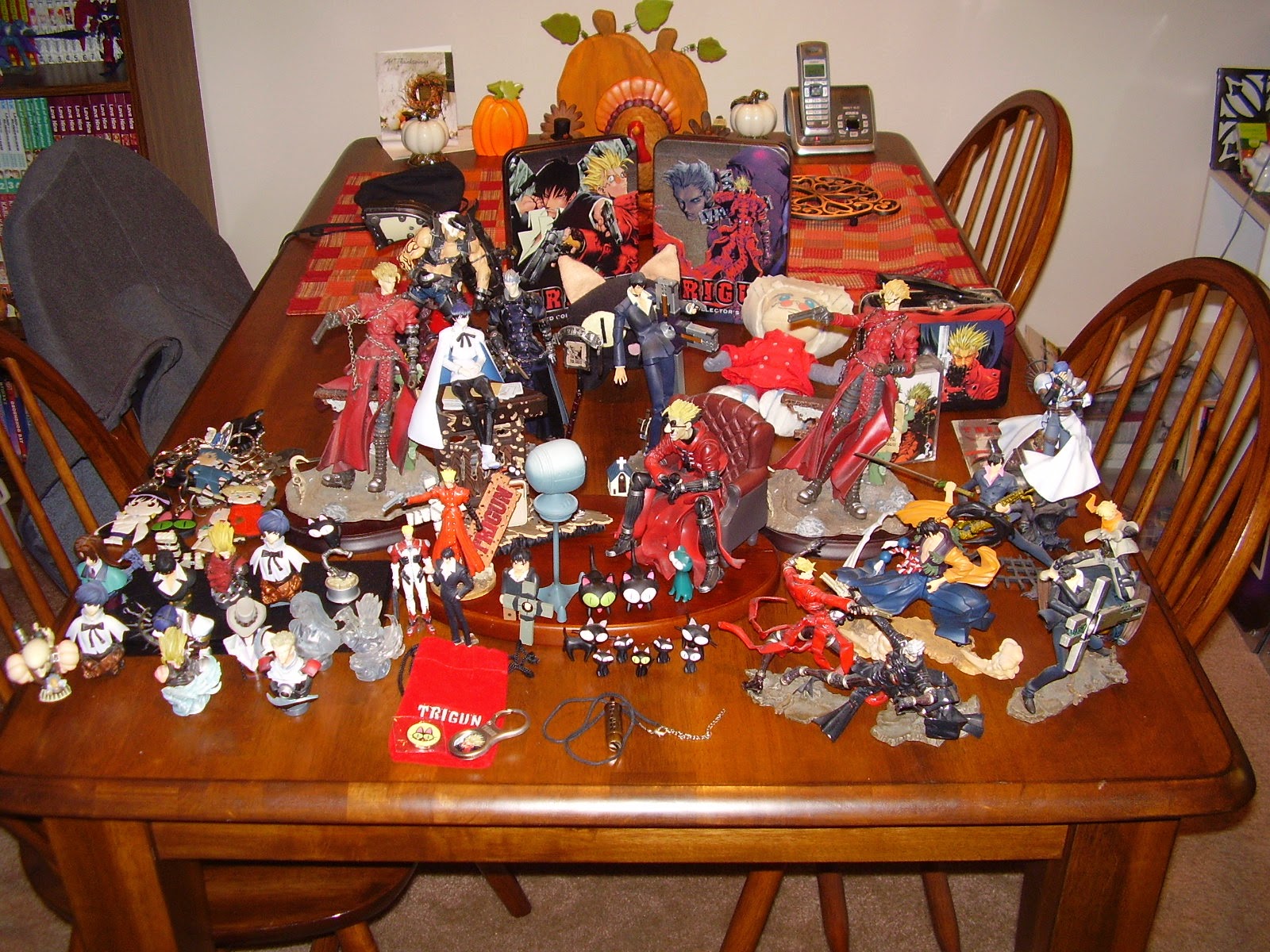 Originally most of my money went to buying figures strictly from Trigun.  Mostly Vash, but a few others as the years went on.  This collection is not by any means comprehensive.  I have friends who have quite a few more than this, but I enjoy the range it has as a set of figures.  Mostly because you have good guys and bad guys, anime and manga based, official paints as well as 'repaints' which were mostly Vash's special black and silver coloration.  Sometimes I wish they'd explained why Vash also came with a black coat in those early figures, even though it eventually came to fruition in the manga series years later, I've always wondered if Yasuhiro Nightow came up with the idea or whether it was in the mind of the figure creators.

In the next blog I plan to go to my next set of figures:  CLAMP

Posted by Milly Thompson at 3:33 PM