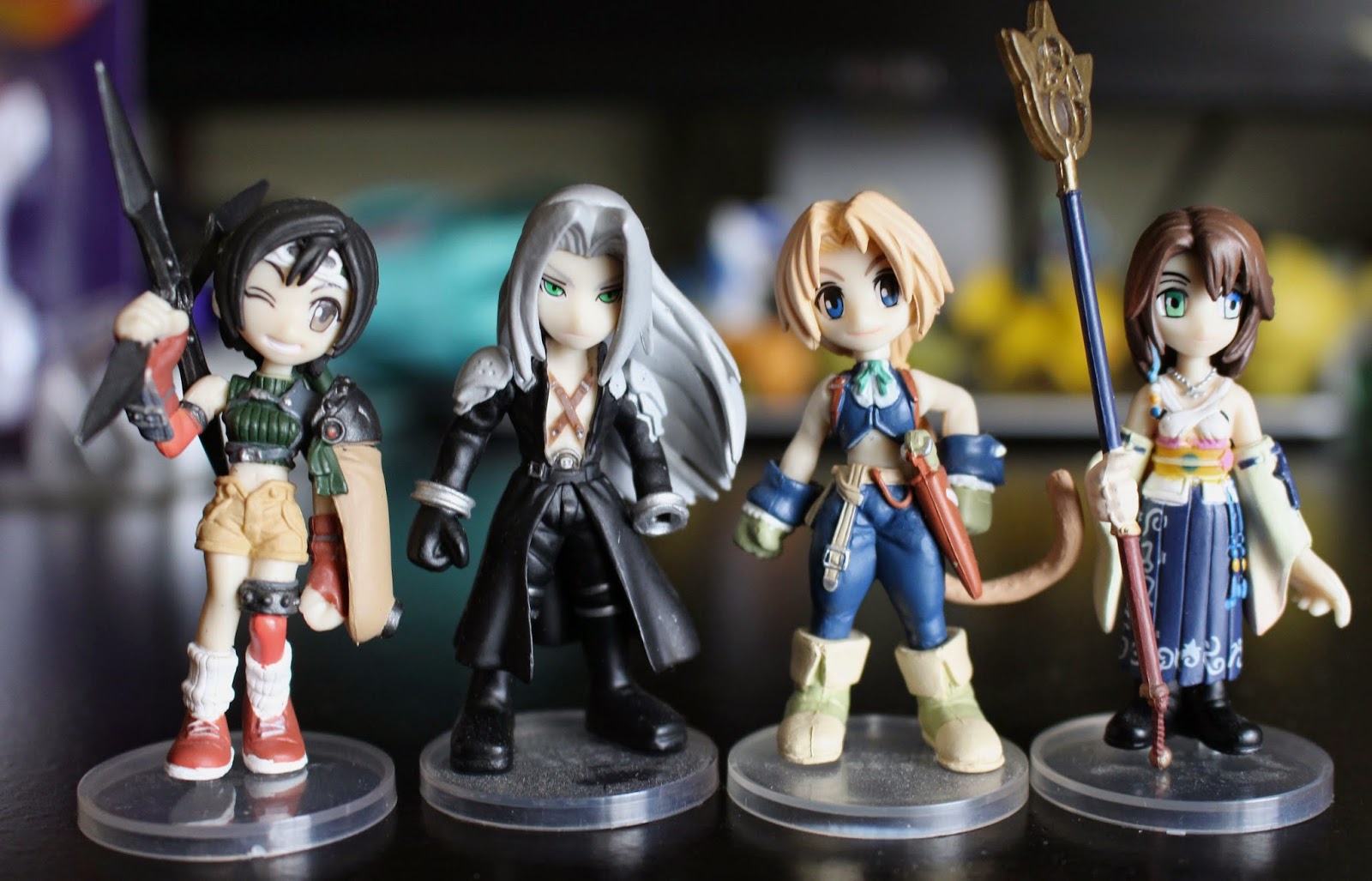 Welcome to part three of "My Life with Anime Figures"!  Today I will be talking about gatchapon, which are small figures that often come in capsules, sometimes in multiple pieces, or are small enough to be molded from a single piece of plastic.  Often these small figures are chibi versions or busts.  In Japan these figures often come from vending machines, although in the USA, many of them are sold either in the capsule eggs or just in plastic bags.  I still consider some of the blind box figures gatchapon, although I'm sure I'd get an argument over this.  For this blog I'm grouping some of them in this category as typically you don't know what you are going to get until you open the package.

I had briefly considered grouping my Trigun figures into this category as the first ones in that blog were actually gatchapon.  However, since I have such a huge collection of Trigun, I decided they should have their own section.  Many of the CLAMP figures were also this way in part 2.  The keychain figures of Tsubasa Chronicles above were also gatchapon, but I bought them as a set.

Most gatchapon found in the states come as sets from a vendor, although on rare occasions you can find them in vending machines.  Wizzywig, which I mentioned in the previous post had a set of six of these machines, and I've seen pictures of them in Japanese stores in the states, but most of the time you'll have to settle with finding them without the chance of being surprised. 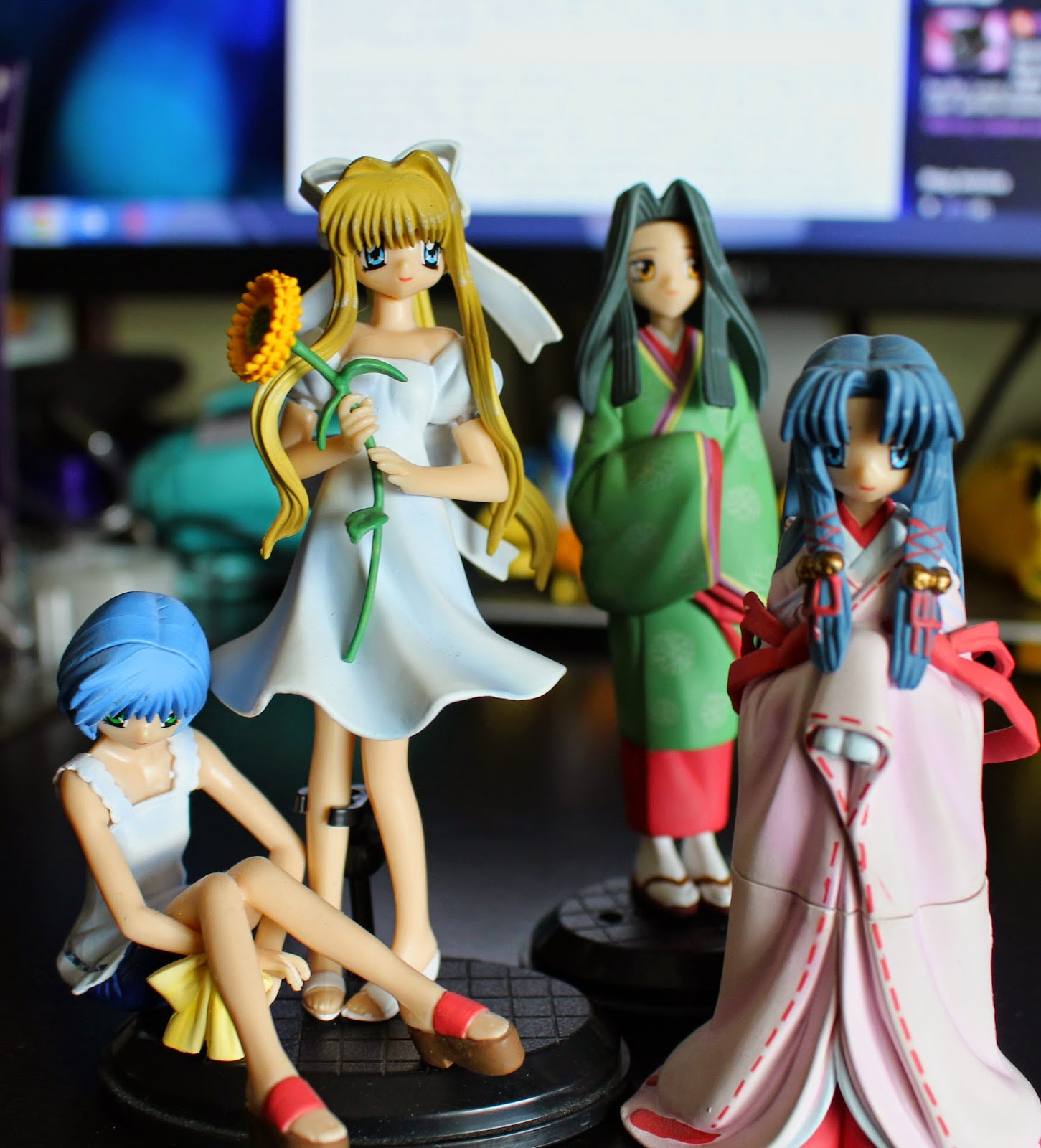 Besides the Final Fantasy figures above, many of my random purchases over the years were by digging through boxes filled with gatchapon.  Many anime vendors in the past (although sometimes you can still find them, usually these figures get thrown into grab bags) would just dump older series gatchapon into a box and label them for $2-$5 and you would have to dig through them for a random find.  My husband came with a dozen such figures he never opened, so I have quite a few figures in the house that won't even go into this blog as we've left them packaged.

However, some, like this set from the short series AIR, I took out and put together.  As you can see, many of them have silly expressions, perhaps the eyes don't line up completely, seams are obvious and they don't always stand on their bases properly.  I've always been amazed how they can figure out how to make these figures fit in a small capsule and then also look like whole (if sometimes quite wobbly) figures once they are put together. 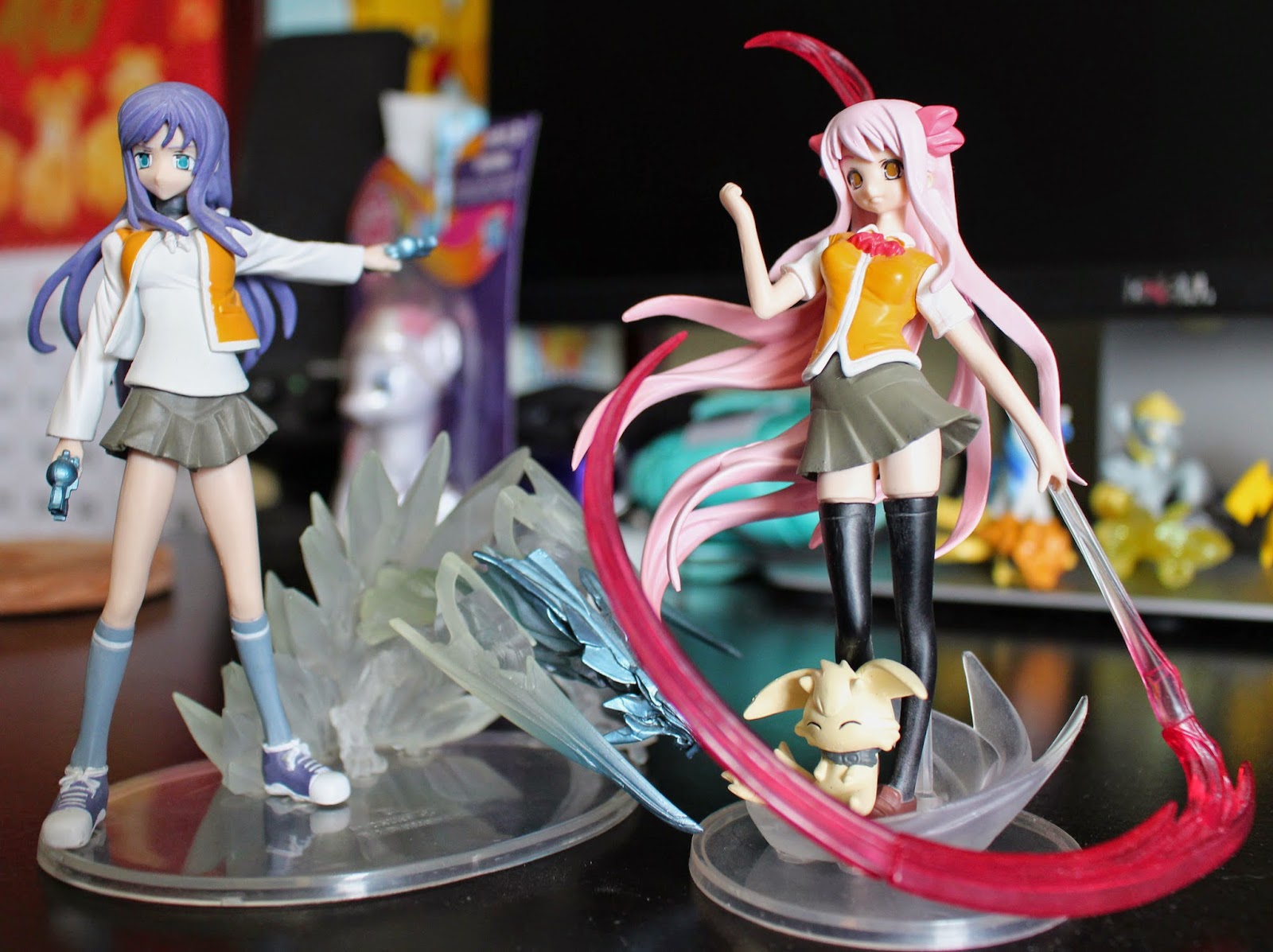 A special case of this (although I admit these are blind box figures) were a couple I had from the Mai-HiMe video game (although I didn't know they were from a video game at the time).  These two came in a dozen parts each, very tiny and fragile.  They were the first figures I collected which were made with clear and opaque plastics.  Unfortunately they are big dust collectors so I keep them packaged up now except when I bring them out to show them off.  It's still hard to believe they came out of a little 2x1x5 inch box (or at least close).

I have always been drawn to small figures that have lots of little pieces.  It's amazing how much detail can go into a figure that only stands three inches tall.  The better quality pieces have better paint jobs; blind boxes tend to be better than true capule gatchapon.  Also they tend to fit better and the seams are less obvious. 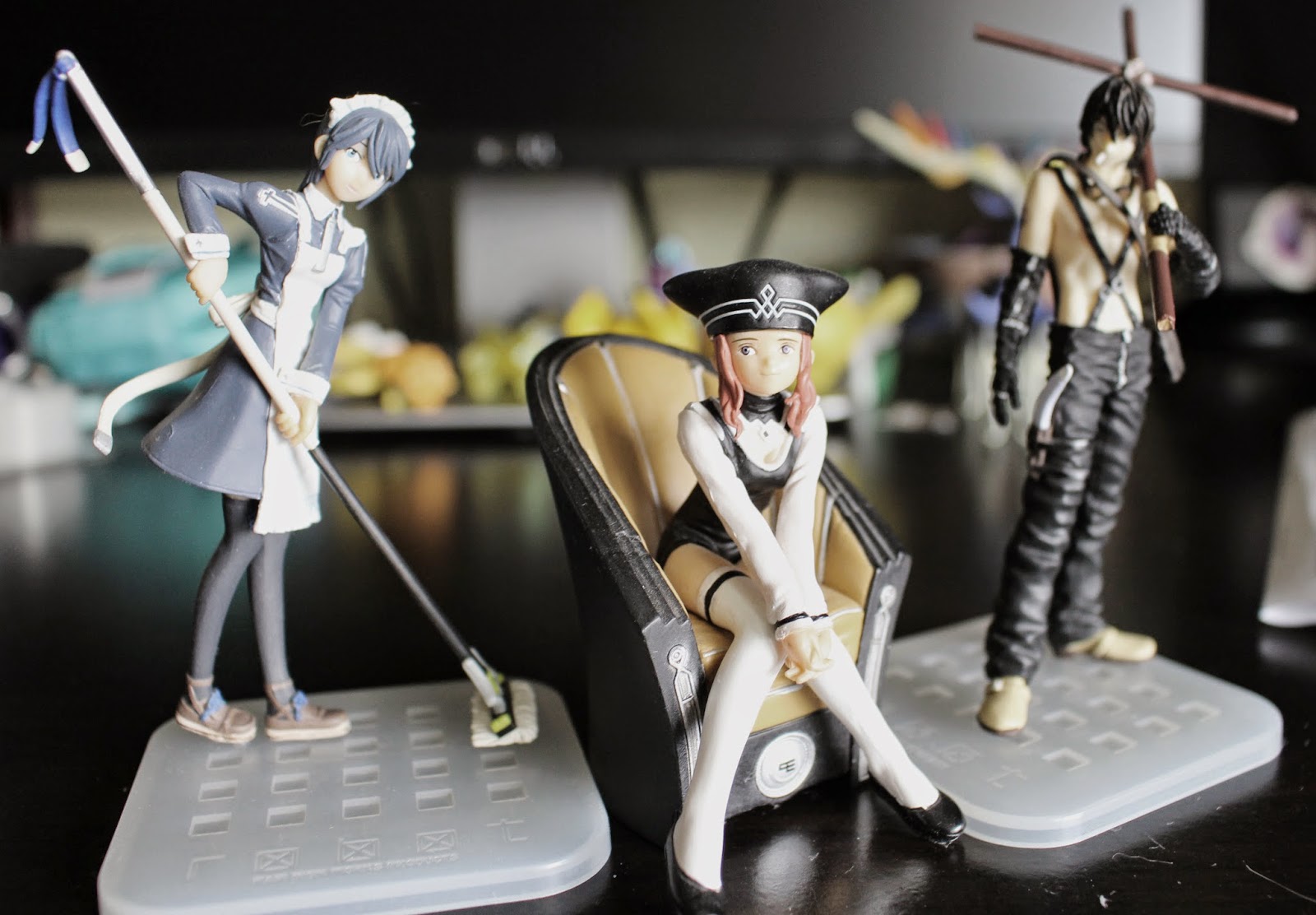 These figures from the ROBOT series (Yoshitoshi ABe) came in multiple pieces, also in blind boxes.  Although, not too many pieces, they have very clean printed eyes, the figures are carefully constructed with lots of little pieces.  I fell in love with these series of figures, although I only own one more (which you'll see below) since the boxes cost around $15-$20 when I managed to find them years later.  There were three or four different series based on the graphic/art books with the same name.  I first fell in love with the almost 'steam punk' feel early on with Lain, and then later with Last Exile.  Strangely enough, I never collected any of the ROBOT series even though it was later released in English and I found at least four of them and went through them at Borders back in the day.  I'm not sure what the stories were behind these random figures, but I still enjoy looking at them and have never packed them up (even though you can see the dust has started to collect even after a good dusting today). 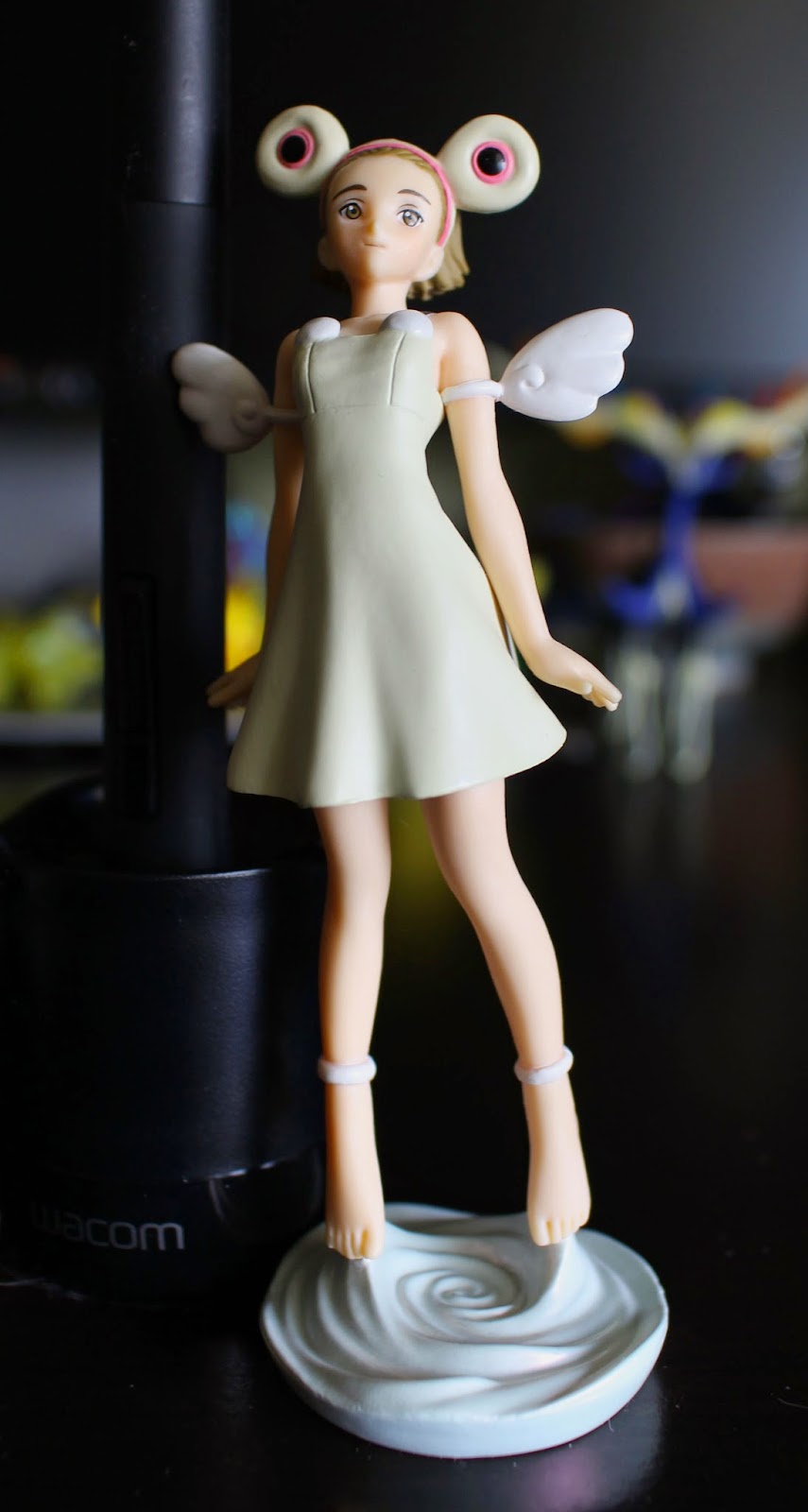 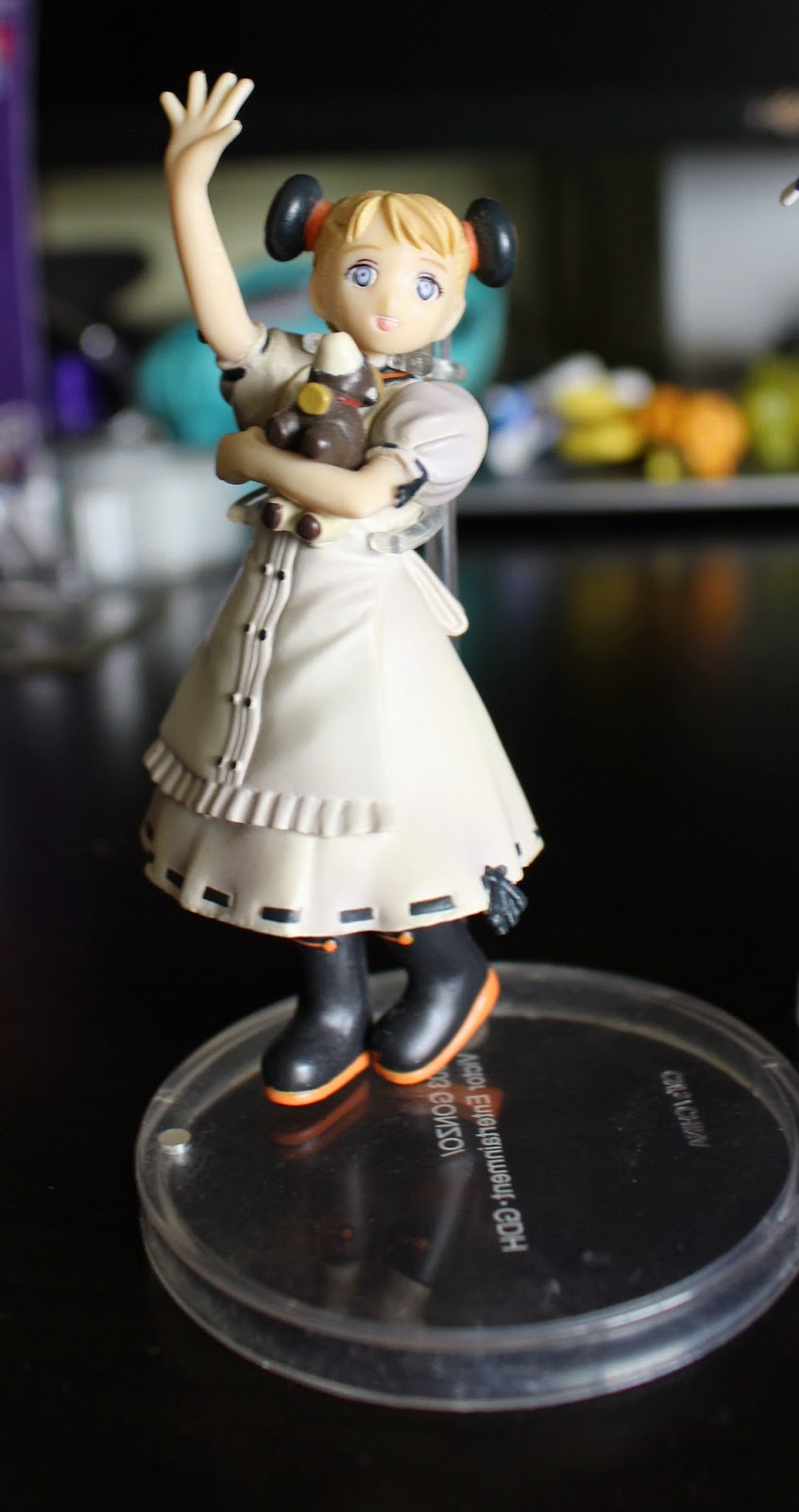 As you can see from the figure on the left here, she's one of my trouble children as she won't stand on her own anymore.  Her little feet fit on tiny little pegs and she's had a habit of leaning back almost from the very beginning of pulling her out of the box.  I like her though, maybe it's because she's got wings (I'm a sucker for wings).  The base is a really awesome opal pearl color with bits of blue, purple, and yellow.  Very few of my small figures come with special paint, but I have special feelings about those that sparkle, or look different in light.

I haven't placed anything in my photos before this to give you a sense of size, so with the Wacom pen next to her you can get an idea of how small.

For a time, some figures came with DVD box sets.  The figure below comes from Last Exile, and she came from DVD set number one that had the box with her.  Al has an alternate body where she wears her coat.  I actually have two of these figures around the house since both my husband an I got one with our DVD sets.  I took mine out of her packaging though and used to switch her between this look and the coat which she'd wear during the winter.  I rarely do this anymore, although as I was taking her apart to clean her today I noticed that her legs are starting to get sticky.  I'm not quite sure on the lifespan of figures.  I have early figures like the Trigun ones that have collected some dust but they clean off easily with a brush.  Others tend to get a layer of sticky dust that won't clean off without running them under water.  Some more mat-finish figures don't seem to collect much dust at all.  The little angel figure above collects dust on her base but she remains fairly dust free for the most part even though I've had her a long time.

So far, I have only one figure that is showing age because of a lack of regular dusting.  The Vash McFarland figure tends to show it's age the most since it's leaning and getting sticky from a degradation of plastic, paint and just collecting dust and other debris.  He's one of my oldest figures however, dating from probably around 1997, he's been out for close to 18 years now.

Smaller gatchapon are handy because they are easily packed away if you're like me and rotate them in and out of storage.  Larger figures take more care in packaging, where capsule figures can be taken apart, wrapped loosely in soft tissue paper or paper towels, and then packed away in a plastic bag.  It's actually a good idea to rotate figures at least every six months, or clean them at the very least with a soft brush.  Handling figures also seems to do the trick of keeping them clean.  My collection of pose-able figures tend to collect less dust when I'm handling them regularly and exchanging parts. 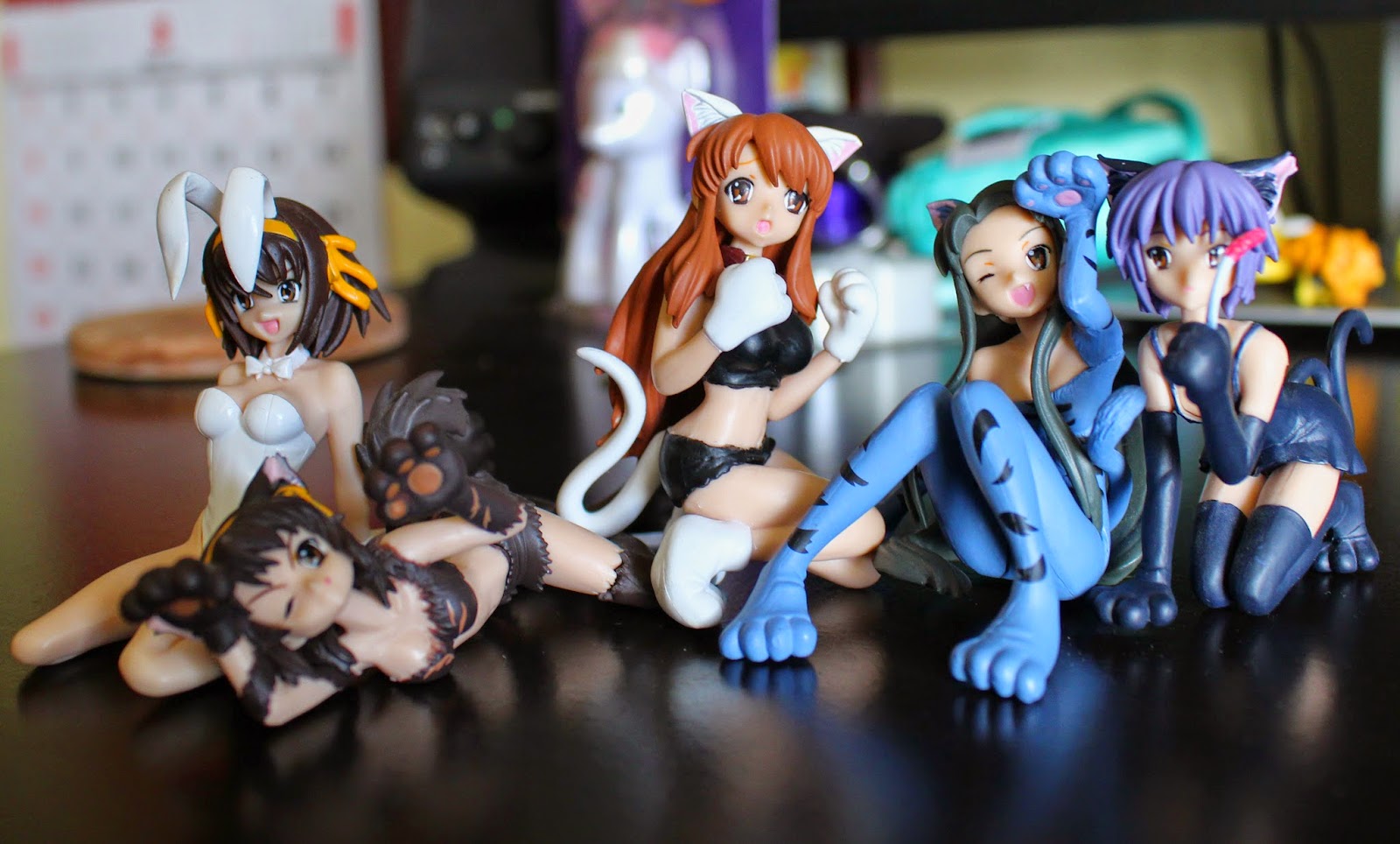 My final photo is a set of Haruhi Suzumiya figures.  The unique thing about anime figures like these is the chance to see the characters in outfits you might normally find them in with larger figures.  Haruhi actually had these costume in the anime, but I have seen small figures with silly poses and cosplay when they don't show up in the exact same outfits in the anime or manga.  Having a smaller figure to work with, they can produce more of them at less expense then a 1/8 scale figure.

I still remember the first time I saw these figures at Wizzywig (yes, another of my early purchases there, although these were closer to the end of the larger shop).  Many of my figures as you can probably tell from the past two parts of this series were mostly modestly dressed figures from shonen or shojo anime/manga.  Occasionally you can find more 'risque' gatchapon or box figures, but these were the first set that I ever picked up on my own.

I'll confess, I'm married happily, I like cute things, but I also like figures that have that cat 'moe'.  I remember feeling a tad bit scandalous when I picked up these figures however.  I think I remember thinking to myself that someone would judge me for buying a bunch of cat girls (you may notice the Haruhi in the back left that is a bunny, she doesn't actually come with this set but I couldn't help but keep her in there with the others).  Over the years I have come to appreciate the art of cat girls and the adorable poses of these little figures.  I may even have a part in this series about cat girls in general as I do have about a handful of different figures now that are dressed as cat girls.  These were the first, however, so I have a special place in my heart for them.

So, hopefully you have a better idea of what gatchapon are and the different kinds you can find out there.  These are rather better made then some of the pack.  As a rule of thumb, if you can see them outside of the package, if they have decent paint jobs, most likely they will fit together reasonably well.  Sometimes a bit of super glue is handy to have if you are careful, that way they won't fall apart on you after a short period of time.  Also, if you're buying blind boxes, if the box is well constructed or has special ink (like metallic font or a combination of matte/gloss) the figures inside will be constructed at an equal level.  Figures that are thrown in a box with dozens of others might be cheap but they will be sketchy too.

Look for a capsule figure between $5-$8 and a boxed figure $10-$20.  Occasionally a nice vendor will offer to trade you a different figure if you get repeats, so buying multiples at a time sometimes help you finish the collection.  Other vendors might have figures out in a case that they are willing to sell you where you can see how the parts fit together.  If they are charging more than $5 for a figure that's put together than what you can find at another vendor in a blind box, most of the time it's better to go the route of the blind box.  Just find a few friends that are willing to share in the fun in case you get a repeat.

Even if you don't have friends who are willing to buy a few small figures you can trade off with, I have found at least these cheaper figures are easily gifted to your friends down the line.  More than one little blind box from my collection has found its way to a friend for Christmas or a birthday.  Feel free to spread the anime love!~

Posted by Milly Thompson at 3:41 PM