My Life With Anime Figures - Part 8 (Room for Improvement)

I wasn't exactly sure if I'd have enough topics to keep this series going more than a few parts, but in today's installment of "My Life With Anime Figures" I decided to cover a question that I know any collector will normally hit upon from time to time.  It's one of the most important questions, second only to "Should I take a figure out of the box?  Or should I keep it pristine in the box?"  And obviously this question will only arise if you have taken said figure out of the box:

"Should I modify my figure in any way?"

Today's installment will go over the three main questions that I hear about figure modification:

1.  Should I glue my figure together?
2.  Can I modify or paint a small part to fix it?
3.  Is it okay to completely remake a figure into something else?

Will you want to re-sell the figure at some point?
Do you want to play with your figure?
Are you only collecting or are you enjoying the figure?
How will you store the figure in the box?  Do you have room?
Can you even see the figure inside of the box to enjoy it?

Okay, mostly people who keep figures inside of the box plan on selling them some time in the future.  Most likely they are perfectly content on just owning the figure, and are too worried that dust or handling will somehow diminish the value of the figure.

To those of you who are in this category, this following blog is not for you.  Most likely you will cringe with what I'm about to show you because to me, figures are not about re-selling, but playing with, enjoying, etc.

Okay!  Now that we have that out of the way and your figure is out of your box, what will you do with it?  Put it on a shelf, or a desk, or somewhere you can look at it and smell the plastic of your new treasure.  Maybe you bought a cheap figure that you had to put together (like a gatchapon) and you're having trouble keeping it together.  Mind you, most well made figures will not have this problem, but sometimes figures like Nendroids and Figmas will have parts that loosen after being played with for a bit and you might find yourself asking this question:

1.  Should I glue my figure together?
No.  Well, that's the short answer, because most of the time you're going to get glue everywhere and all you'll see is glue everywhere and you won't be happy with your figure after that and it'll get stuck up on a shelf somewhere because you glued it to the point where you can't play with it anymore.  Now you can't re-sell it even if you did want to get rid of it because no one's going to want to look at that icky mess you just created.
Yes.  That said, there are times you might have to glue it.  For instance, you may have played a bit too roughly with that Figma and an arm fell off.  Oops.  Okay, pinning and gluing might be necessary to make it fine to play with again.  Watch videos on YouTube and practice gluing without getting the glue everywhere - use tiny amounts!
Maybe.  Occasionally I say you may just want to glue the whole bugger together if it won't stay together long enough to even stand on a shelf.  If, for some reason, your figure was one of those less than ten dollar figures that came in a bunch of pieces, most likely you'll need to glue it at some point just to keep it together.  Just watch how you do it and be careful you glue the pieces together correctly or you'll get something that looks like it's out of a Picasso painting. 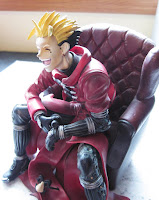 Possibly.  This question also goes back to whether you feel like what you're doing to the figure will make it better or not.  I've had a few figures over the years that bothered me to the point of 'fixing' them with paint.  Below I've included a couple of pictures to show you a Vash the Stampede (from Trigun) figure that I bought and 'fixed.'
For those of you who have only seen the Trigun anime, you'll probably wonder why in the heck Vash has black hair.  Without going into too many spoilers from the manga to the anime, between the original Trigun manga and the Trigun Maximum manga, some of Vash's hair turns black.  I'm a fan of Trigun Maximum, and the image this figure comes from has Vash's hair black in the back.  The original figure did not.  Because of this inconsistency, I took it upon myself to fix the figure to correct it. 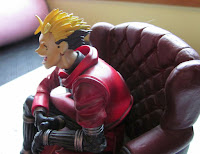 As you can see, it didn't really diminish the look of the figure, it just changed it to look more like the original image.  And really, if this figure is going to be yours forever, or as long as you care to own it, why not like looking at it?  Why not do something you think you'll be proud of?
Sometimes you'll also see problems in painting that you could fix, or perhaps a part of the figure has been scratched, or broken and can be fixed by a slight modification.  Always be prepared before you attempt to do something like this, watch plenty of videos (there are a lot of them out there) and make sure you've got all of the correct supplies.

3. Is it okay to completely remake a figure into something else?

I've seen this particular thing done on various levels.  Most of the time those who do a modification or complete re-do will start with an inexpensive figure.  I worked on some smaller collectibles first such as My Little Pony Blind bags. 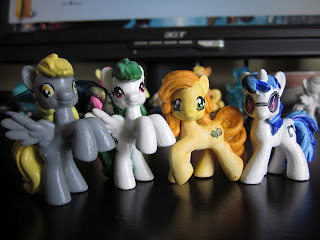 Then I worked my way up to complete over-hauls (although this one could almost fall under the 'fix' category.  Princess Celestia appeared the first time as completely pink in pony form, so I completely repainted all but a few key areas (namely her eyes and cutie mark). 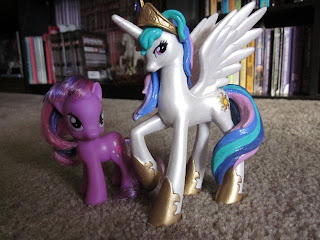 Of course, now you're going, but what about anime figures?  Should I not touch those?  Well, it all depends on you.  Have you had experience painting in miniature?  Do you have skills with molding?  Start with a garage model first before you try to start something from scratch, otherwise you might regret something and you'll have ruined your figure.
I have a coworker that re-makes POP! figures into other figures that they don't make (although I'm sure that's hard to do since there are so many of them) but giving them different color hair, clothing, etc, sometimes will improve a figure that you otherwise were "Eh" about.
Take for example, my newest figure acquisitions which happened to be cheap, "backpack charm" figures of Hatsune Miku.  I don't have a picture of them before, except to say their hair colors were wrong, way more blue than aqua.  They were cheaply painted and I got doubles on accident which really got me angry seeing as though there are 6 varieties, I bought three, so dangit, I should have gotten at least half of the different types, right??  I spent a absurd amount on them - $7.50 a piece (if they'd been open package I wouldn't have spent more than $5).
However, being enterprising and already out the money, I decided to fix them up.  The two below are cases where I did little tweaks and decided to slap a bunch of pearl glaze on them to shine them up a bit: 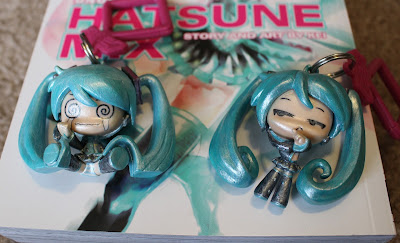 As you can see, I used my manga for color reference.  Originally their hair was way more to the blue side of turquoise than it was aqua.  I fixed up some black splotches of paint on the right one's hand (from a bad paint job) and gave stripes to the left one's panties (because I'm obsessed that way).  I didn't do the pearl coat quite as smoothly as I should have, but now I think I'd be willing to go outside with them strapped to a bag or purse.

The last figure which was a duplicate of the left figure, I decided to do a complete overhaul and completely take the backpack strap off of her and make her into a mini figure. 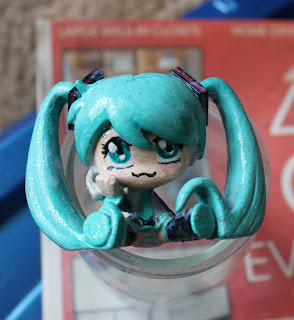 I was a bit too heavy-handed with the paint on her face unfortunately, but I just didn't like having duplicates.  I completely sprayed a base coat on this figure and painted her from scratch, top to bottom.  Took a few days thanks to cat interruptions and the fact that I was working with such a small figure and had eye strain.  She only sits less than 2 inches high.  But, I think it turned out pretty cute, even if the only clear glaze I had at the moment was glitter glaze, so now she's sparkly, but Miku looks okay sparkly in my opinion.  I need more practice at painting faces, but I don't think she turned out too poorly.

How much or how little you feel there's room for improvement in your figures, make sure you plot out your plans in advance.  Do you feel that you'd be happier with a changed figure than the original thing?  And will you deal with the consequences of not being able to sell it (unless you modify figures for that purpose and sell them in which, go you!)  Think about your choices and then stick with them!  Sometimes we all need a little improvement to make us feel better about ourselves.

Posted by Milly Thompson at 3:33 PM