I'll be the first to admit, I'm pretty jealous of some of these figure photographers I've been following online.  If it weren't for the fact that I just don't have the funds (or time) to do the amazing stuff they do, I'd probably start my own Facebook page and try to get a following like they all seem to have.  And maybe eventually I'll have enough photos to try to do it myself.  Perhaps even enough to produce a book and try to get it funded.  Nah...  Well, a girl can dream, right?

Anyway, today's "My Life With Anime Figures" surrounds the creation of a little kitchen for my Nendroids.  Why a kitchen?  Because I could get decently sized furniture from the Calico Corner toy series, and the kitchen set was adorable.  Plus, I love miniature food.  Today you won't see all of my collection of tiny food, but will probably bring out the rest eventually in the upcoming months as I try my hand at more of these.  I also have more Nendroids to photograph and will probably do more changes to the furniture itself in the future too to make it more unique.  But for now, these are mostly test shots as I decided to build a 'stage' for my figures. 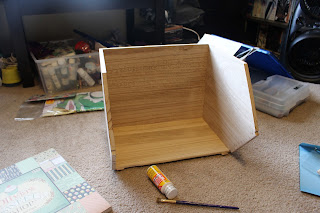 So I had furniture, food, and figures, but I didn't have a room.  I considered making a room out of a cardboard box but I realized over time it might break down from use and I also wanted something stable enough that I could move it out of reach from my cats.  After some hunting I found a sturdy unfinished bin I was able to cut the front off to give myself two corners of a room.  I've seen some setups with only one corner, but I wanted to have some opportunities to switch sides of the room (which you'll see in the photos to come. 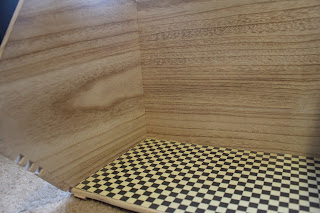 Now that I had a blank room, how to decorate it?  Paint it?  Cut holes for windows?  I finally landed on scrapbook paper since I could tape it on and remove it as I pleased.  I found an adorable set of paper called "Olivia's Kitchen" at Hobby Lobby that had plenty of old fashioned food themed papers and also had some types of repeating patterns that would look good for flooring.  I settled on the checkerboard design because even though my Nendroids aren't in the old days, I like the old fashioned style look in kitchens.  Plus the furniture, especially once I get it painted, will probably look more old fashioned anyway so it will all fit in. 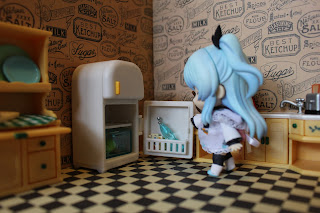 Unfortunately I don't have any photos of the room by itself with just wallpaper and the window, or with furniture installed but no Nendroids.  But I'm sure you came here to see photos of the figures anyway, so here's one of the first setup photos as I was testing lighting.  I realized pretty early that because of the three walls there wasn't going to be a really good way to get natural lighting in this space.  The flash washed it out terribly, and closeup photography kind of needs natural lightning.  I tried turning it to the window, but the shadows appeared in strange places.  So I pulled out a couple random lamps, one from IKEA which gives a sort of natural glow and another LED spot lamp that was just too focused.  But I do think perhaps it might be of some use in the future. 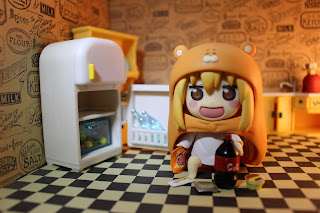 As you can see in the photo of Umaru on the right, the soft warm glow on the right side of the room was from the IKEA lamp sitting inside the room.  The light focused on the fridge is the LED light that was just too hash and pinpointed.  I think maybe it'll be useful for the glow from a computer screen or something, so I'm keeping it nearby just in case.  Unfortunately no matter where I put the soft light of the other lamp it just didn't light up the room as I wanted.  So I snapped various photos while moving it around to different positions and then headed to bed that night.  During a bout of insomnia, it finally hit me that I could 'float' the lamp above the box if I built a strut-like system on top.  (Again, I'm glad that I splurged for the wooden container as opposed to a cardboard box which wouldn't have held the weight of the lamp and strut system). 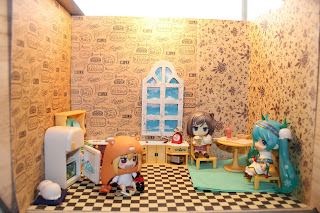 Here's an unedited photo of what the room looks like lit with the lamp from above.  I also added a fun window and painted clouds and gave it a night shine.  Attached it using double sided tape, so again, I can change it and move it where I want.  The lighting it sort of like you'd see in an old kitchen like this where they really didn't put many windows and there was usually only a little tiny light above.  I'd love to add upper cabinets someday, but we'll see.  I also added a second "wallpaper" to the right side of the room to make the seating area a bit different.  Eventually I'll fix the seam, but for now it does the trick.

So now that I've got half-way decent lighting, I have a kitchen, if not completely finished, and I've got some Nendroids hanging out, I thought I'd have a little fun with it. 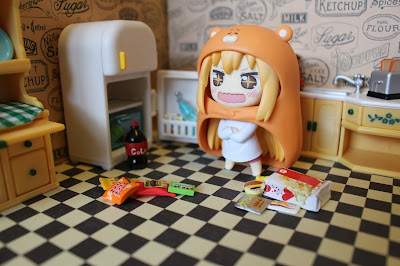 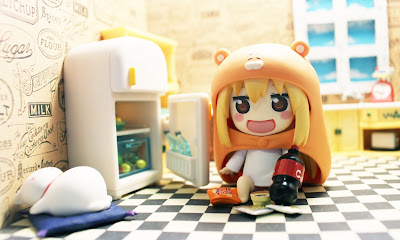 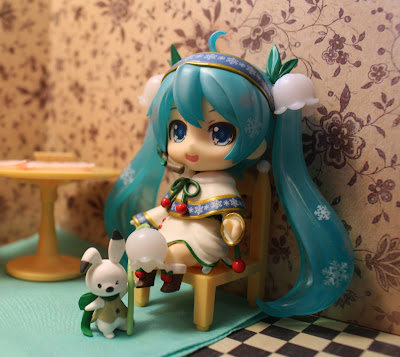 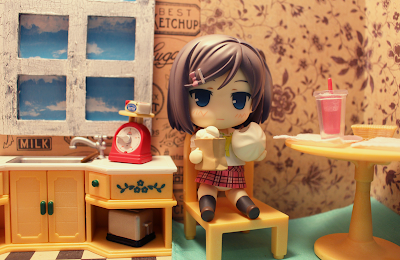 Tsukiko is munching on steamed buns she brought over.

And finally... Umaru raiding the kitchen in the middle of the night! 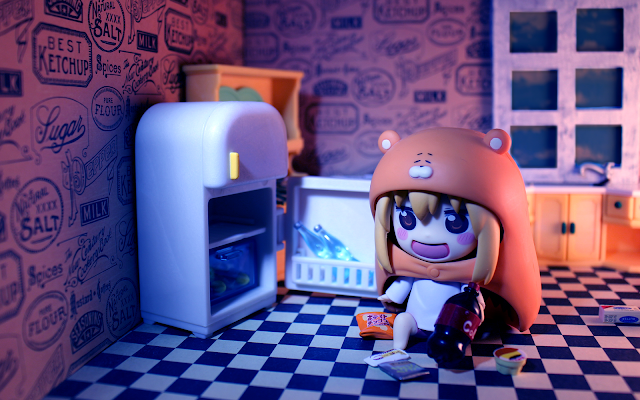 This finally photo was actually my favorite because I got to play with Photoshop and do some color changes to make it look like it was night.  I'm very excited to be able to do more with this kitchen as time goes on and hope to expand it by adding photos and curtains and other fun things as time goes on.

Posted by Milly Thompson at 4:41 PM