What Happened Since May

So....something happened in May after my vacation.  Or rather, maybe it started in June, a bit after my birthday?  I think that's probably about right.  I fully had plans in order to post more awesome things about the House on the Rock, thought I'd tell everyone about the story that I was writing - I'd gotten in over a chapter of writing, had a lot of ideas of where to go next and I was really on a roll with the spring planting outside too... 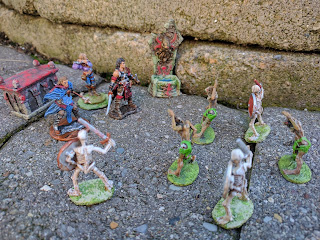 And then my husband got into D&D (Dungeons & Dragons) and even though I'd played briefly back in the early 2000's, I really never got into it that much.  It was rather boring for me and really confusing and I didn't think it was something that I would get into.  But my husband bought a little figure in order to represent his character so I thought...no problem, right?  I'll help him paint it since I used to paint WH40K back then as well.  Who knew that a part of my life right after college would re-appear when I was in my late 30's?  So we bought some paint and I started my adventure in painting again but refused to play D&D myself...
At first, of course.  I really just did the little blue guy in the photo, and then told my husband he was kind of on his own because I might help paint but I wasn't going to play, my schedule really didn't allow for it all that much anyway.  But then his friends asked if I could paint some of their minis too... so then I've got another one under my belt...then some monsters, and one afternoon I got dragged out and played my first round of D&D after some 15 years.... and it wasn't terrible.
I think it's a bit less confusing now that I could write up my own character, had a book to look at (instead of my boyfriend in college just writing up a character for me) and then I ended up going to the local gaming store and buying a figure for myself...JUST in case I were to play again, I didn't want to borrow someone's figure to represent my character. 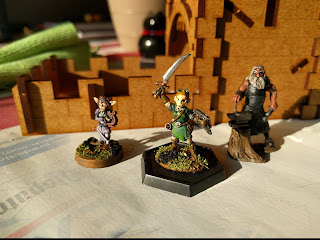 Skip forward about a month later and suddenly I was buying up all sorts of figures after having painted some for my friends (even a paid commission!) and I bought a few just in case we were ever to play ourselves, and my husband had talked briefly about running a campaign himself since it sort of interested him.  Also it would allow our DM some time off for a week maybe if we ran a game ourselves once in awhile.  Meanwhile, I painted up Ellabee (the purple figure as well as the green, I couldn't figure out whether bard or fighter was more my style honestly).  And I got to play her in a few more games but then she sort of got sidelined when something unexpected happened.
During a moment of chuckles reading something on my phone at work, I had a co-worker sort of perk up wondering what I was laughing about.  I mentioned the fact that I was starting to paint figures for D&D and that I'd played a little.  She was totally into the idea of playing herself as she'd never played before.  So a few days later we gathered up two more people interested in playing and I was freaking out because I'd never actually run a campaign and I felt that it was up to me to do it.
So, on a rainy afternoon I picked them all up after work and we went to the local gaming store for some dice and figures, wrote up the characters and then I DM'd for my very first adventure.  It was pretty shoddy really, had a very short and quick storyline and some items to collect and a couple of monsters to defeat and I really didn't know what I was doing exactly but I'd jotted down a map and I think everyone had fun because at the end of the night they were already planning on the next night we could get together! 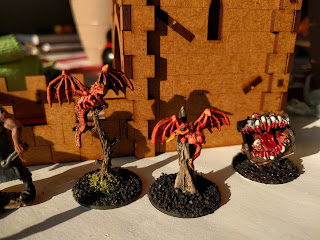 Since then, my life has been eaten up by gaming... mostly.  Also the ridiculous amount of tomatoes that came out of our garden that I had to can and eat and make into all sorts of delicious sauces and salsas.  But anyway, for a good month or more we met once a week to play games and I got really excited and into it, picking up all sorts of monsters and painting them and getting ready for the next week's campaign and we finally got out of the original town that we'd spent the first three levels on and I started heading my party into the "big city" where things have halted temporarily since we had vacations to get through and recently I've had my convention to plan for again. 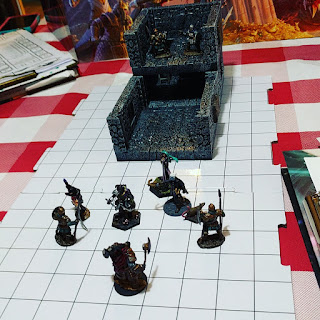 We did...however, have a week where my husband ran a short campaign and I got to use a new character.  The image to the left is our little adventure this week, trying to get a dragon's egg from some guy and having a group trying to steal it from us after we'd just gotten it.  I'm still semi-confused what happened there...but it was fun and I got to play a new Warlock character I'd written up and it was amusingly amazing to not be behind the screen for once.  Don't get me wrong though, I really miss being the DM now that it's been about three weeks since our last game - we'd plowed through playing during the first gal's vacation, but the subsequent weeks it's been nearly impossible to plan since her schedule tends to be opposite of mine and I was covering her as well.
So.... since then this has been my life.  I have most recently been working on the graphic designs and merchandising for the convention, but we're going to be doing another get-together next Friday so I have to start writing up the next campaign to get us back going again.  I have more figures to paint and things to prepare for during the week.

In other news, during my journey into playing D&D and DMing, I've been watching a lot of videos and listening to things online.  I ran across Matthew Colville who's been playing since he was a kid and had some really interesting information about running games which I've been super into.  My players, however, have been listening to Critical Role.  My husband listened to some of the Podcast from time to time and when we'd go on long road trips he'd played some for me but I really couldn't quite get into it.... my players though were completely falling for the characters from CR and it really just boggled my mind...
But as I did a bit of sewing tonight (Halloween curtains for the kitchen...I'm weird) I was listening to the most recent one and realized that it's so much roleplay and not as much actual action and fighting that I kind of think I know why it's boring to me...it's a story that has very little advancement because it happens in real time unlike a standard story.  It's interesting when you're there playing it... it might be amusing...but since I'm not the one playing it, it's sort of 'meh'.  But I do remember the appeal of listening to voice actors when I was younger.  You forget where you are when you hear this voice of a character you know...suddenly you're in that show and you're engrossed in the world.
Maybe it's because I'm older?  I've been there - done that?  Don't know.  But I thought I'd just make a note of this since it's been on my mind lately.