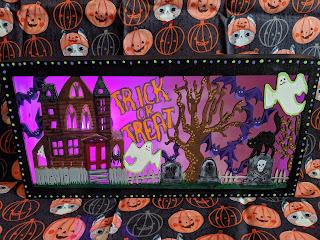 Today starts a new chapter in my life.  No, I'm still sans an actual job...  But my husband started his new job today, the first new one since we moved to Columbus.  In a way he'll still be working with the old job, but it's something brand new and I was pretty proud of him to finally make that jump.
But as I said goodbye to him this morning after breakfast, I couldn't help but think about the fact that it wasn't me leaving for a new job.  I have a few different applications out there still, but haven't heard anything at all today, and I'm trying to just keep my chin up and keep looking.
Meanwhile, I decided I needed to get up off the couch and get moving to do things while he's gone.  Mind you, we've spent almost every single waking moment together since I got fired since he was working from home from around Christmas.  I know he's been super worried about me since before that point as he'd leave for work and come home on my days off to find me still on the couch where he left me.
So, this morning I made it a point to tell myself over and over again that I have to be the supportive wifey, and I also need to make sure he doesn't feel like he has to worry about me while he's gone.  To do this, I hurried up and got around this morning and went downstairs to make coffee and fix him breakfast and send him on his way, cheering him along by messenger and getting other people on Facebook to cheer for him as well.
Then after breakfast I got to work on my to do list.  Pulled apart the fridge and cleaned it out, got rid of a bunch of expired stuff and re-organized the pantry and I still need to do a bit more overhaul, but I think I at least know what we've got in there since the kitchen is going to be my territory again very soon.  The next few hours were spent doing various cleaning, watering, dishes, gardening, pulling in my recycle bin and mail, and taking Olivia out on her leash for a short time.
Painting was also on my list of to-dos today, so get a bunch of things finished, some figures done to the extent that I felt satisfied (some figures I just don't go overboard on since they'll be on the table top for only a few minutes at time).  And then upstairs to take care of all of the social media posts for the next few days.
My husband told me to hold down things with the convention, so I took care of answering questions - didn't realize they had so many throughout the day.  Don't have access to the email questions yet, but the Facebook thing is pretty regularly every few hours.

Okay...so this was more of a journal entry of what I've done with my day rather than telling you about my new routine.

But, in a way it IS my new routine.  I think getting up early in the morning, getting things taken care of for breakfast, and then writing a to-do list for the day.  After that, actually DOING that to-do list.  Then, making dinner and relaxing with my husband and hopefully convincing him he doesn't have to worry about me being depressed at home.

Yes....I'm depressed.  Not so bad today (or rather the last few days, I really need to make sure I go for walks out at the park more often) but I can't help but feel bad about myself not having a job STILL.

I am being a wee bit stubborn with what kinds of jobs I'm applying for... I feel like every where that my friends recommend for me never seem to work, so I keep trying at other places, but everything feels set against me.  I started out being super anxious about the actual interview but then feeling really good after it happened...and then I get turned down for the job after I've convinced myself that I AM RIGHT FOR THIS JOB... only to be slammed down - NOPE.
I worry that I had too much luck with my jobs growing up - I got nearly every job I applied for - so suddenly I'm getting not even ONE job I applied for... (well, except for the one I regret a lot and am too stubborn to go crawling back to)  And I hate this feeling that I'm not that kind of person who people want to hire anymore.  What happened?

Meanwhile, I'm trying to sell things online but so far that's not happening yet either.