Welcome to the wonderful world of backyard bird watching!  Your host today - me - will walk you through a couple of basics when it comes to starting your new hobby of watching birds in the backyard!  I will walk you through a couple of easy steps to attracting birds and then go over a few of the species that you'll see regularly if you live in the North/Eastern United States.

Okay...actually, that's pretty cut and dry stuff.  Actually this blog is more about showing off pictures I've taken in my backyard, but I thought maybe putting some educational stuff in there too might be a bonus.  I've been feeding birds in my backyard since I was pretty young.  My mother had a bird feeder that hung from the eaves outside our patio window and she'd fill it from time to time.  Growing up I thought these little birds in the picture above were "chickadees" - they are not.  They are House Sparrows.  (I'm only capitalizing the names of birds as I name them, don't freak out all you English major types.)  I had a small, metal windup toy of one of these sparrows and for some reason I got the wrong assumption that they were chickadees from a mix up of my grandmother talking about the song of a chickadee (chick-a-dee-dee-dee) and this little toy bird.

Since then, I've learned about all sorts of birds.  I especially love feeding them out in my backyard as my cats get a bit of a kick out of seeing them, and I just like to see what other types of birds I can attract.  Without feeding birds, you might only see these nesting in nearby bushes or trees or typically the birds will hit in a group after mowing the lawn or because of overgrown weeds.  Other birds that are common are Robins, Starlings and a few other species that pass by.  It is possible to see birds without feeding them, but if you wish to see their antics up close, it's good to buy a nice feeder.

My backyard setup at the present are two different feeders (one standard seed, another for thistle which they call something else but I have no inclination to walk downstairs for the proper spelling as I'm lazy - njyger maybe) on hooks that I have attached to my fence - these can be hooked onto back porches and other flat surfaces like tables if you're so inclined.  I also have a new yard hook (shepherd hook) that has a suet attachment and eventually a birdbath if I start to feel ambitious.  It only takes one feeder to bring in birds, and be patient, it sometimes takes a full week or more for birds to find it and start using it, but they'll be all over the place once they do! 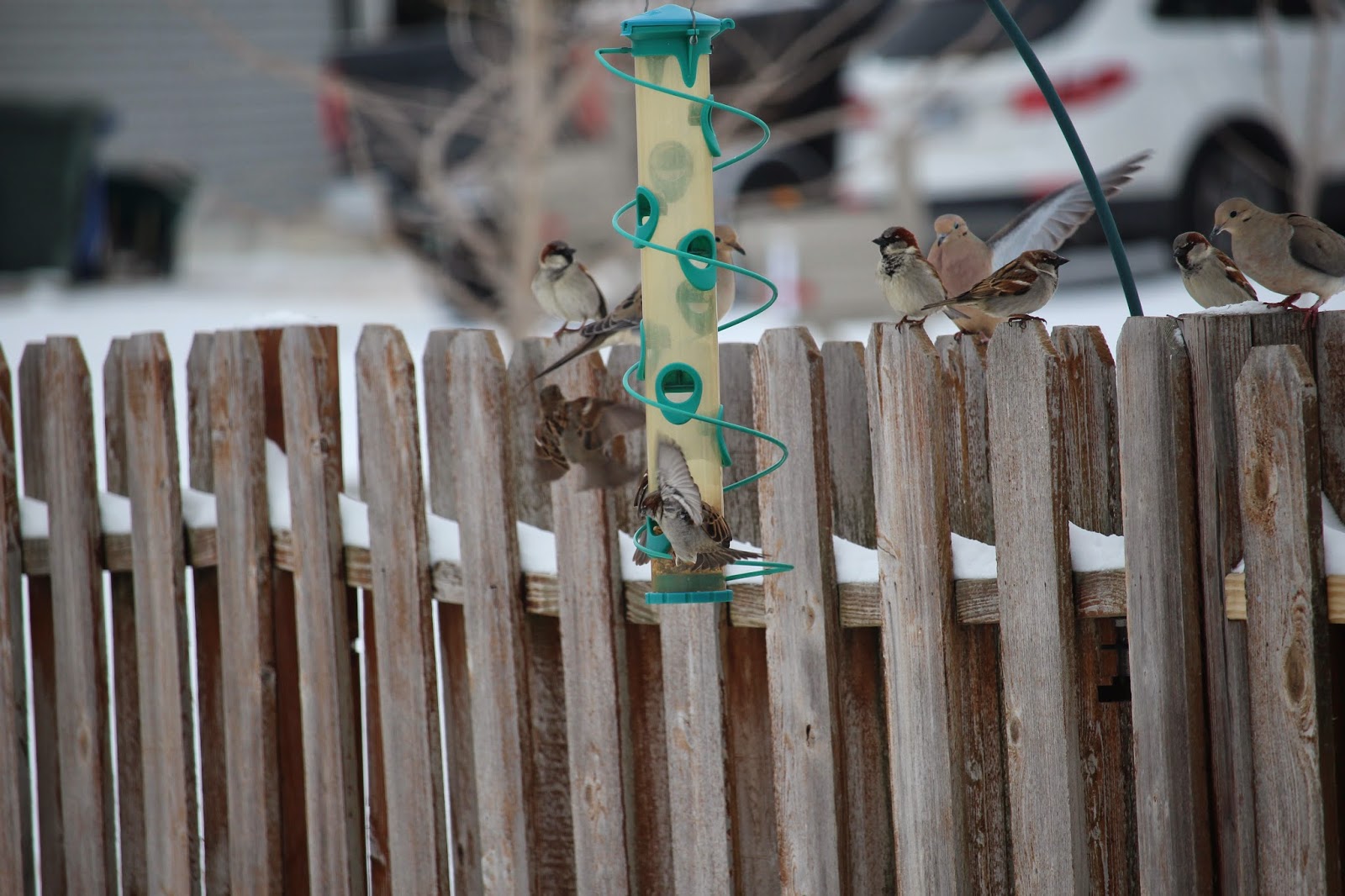 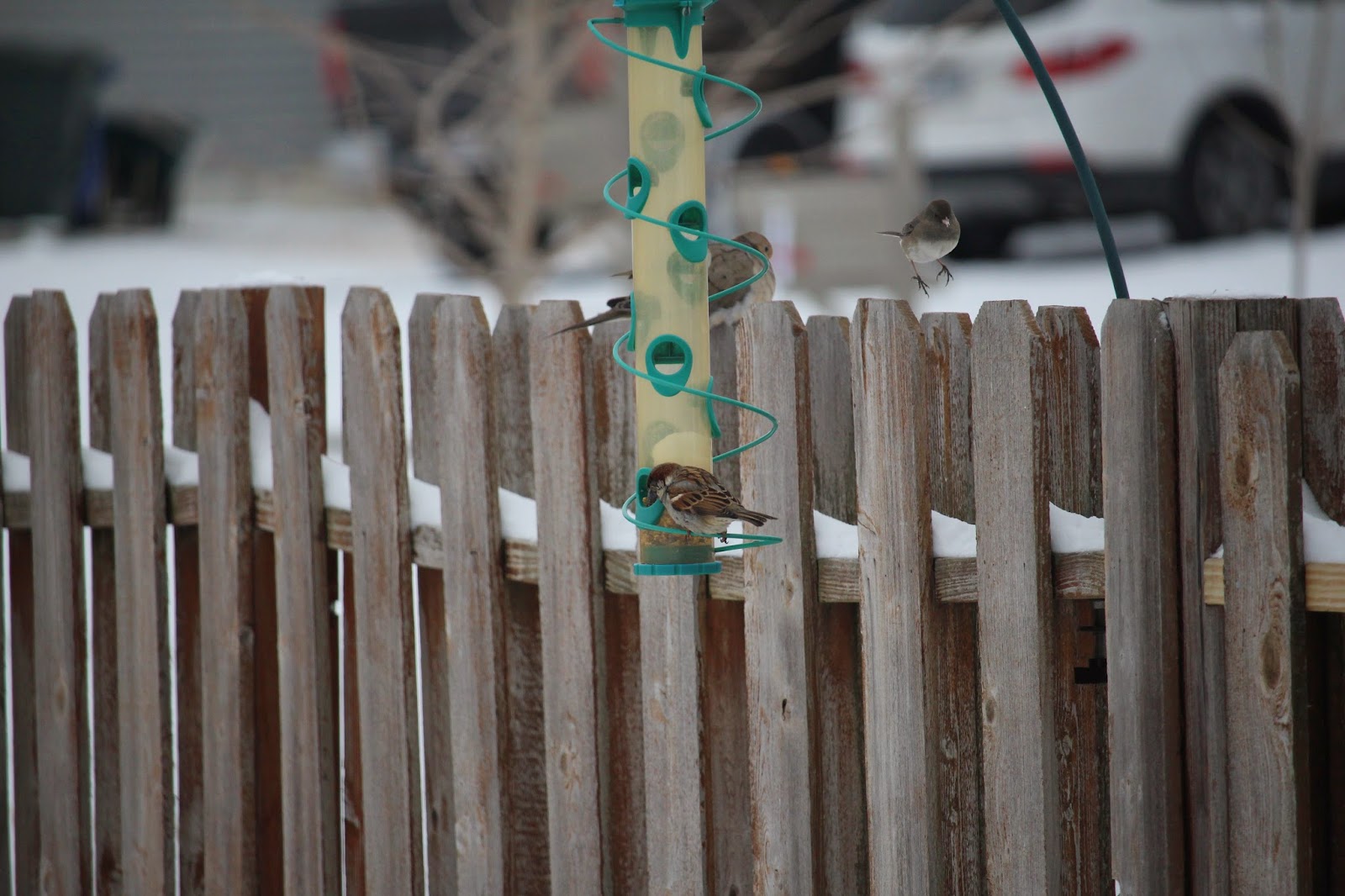 Before long the birds start coming and drain the feeder within the span of an afternoon.  Typically, this large hole feeder (which, by the way, I do not recommend as it can be emptied within an hour by an industrious gang of sparrows) attracts all number of small brown birds and their larger cousins.  Starlings tend to love emptying them and I've had a number of flocks of these birds in the past take over the feeder until all the seed was on the ground.  What this does, however, is encourage the birds who don't, or can't sit on a feeder, to come and feast on the fallen seeds. The Mourning Doves in the top photo have taken advantage of this for the last three years and they have multiplied from only one nesting couple the first year I moved into my house to three nesting couples and a lone sibling.  They will just sit under the feeders sleeping for hours until a flock of rowdy sparrows or starlings comes and empties the feeder. 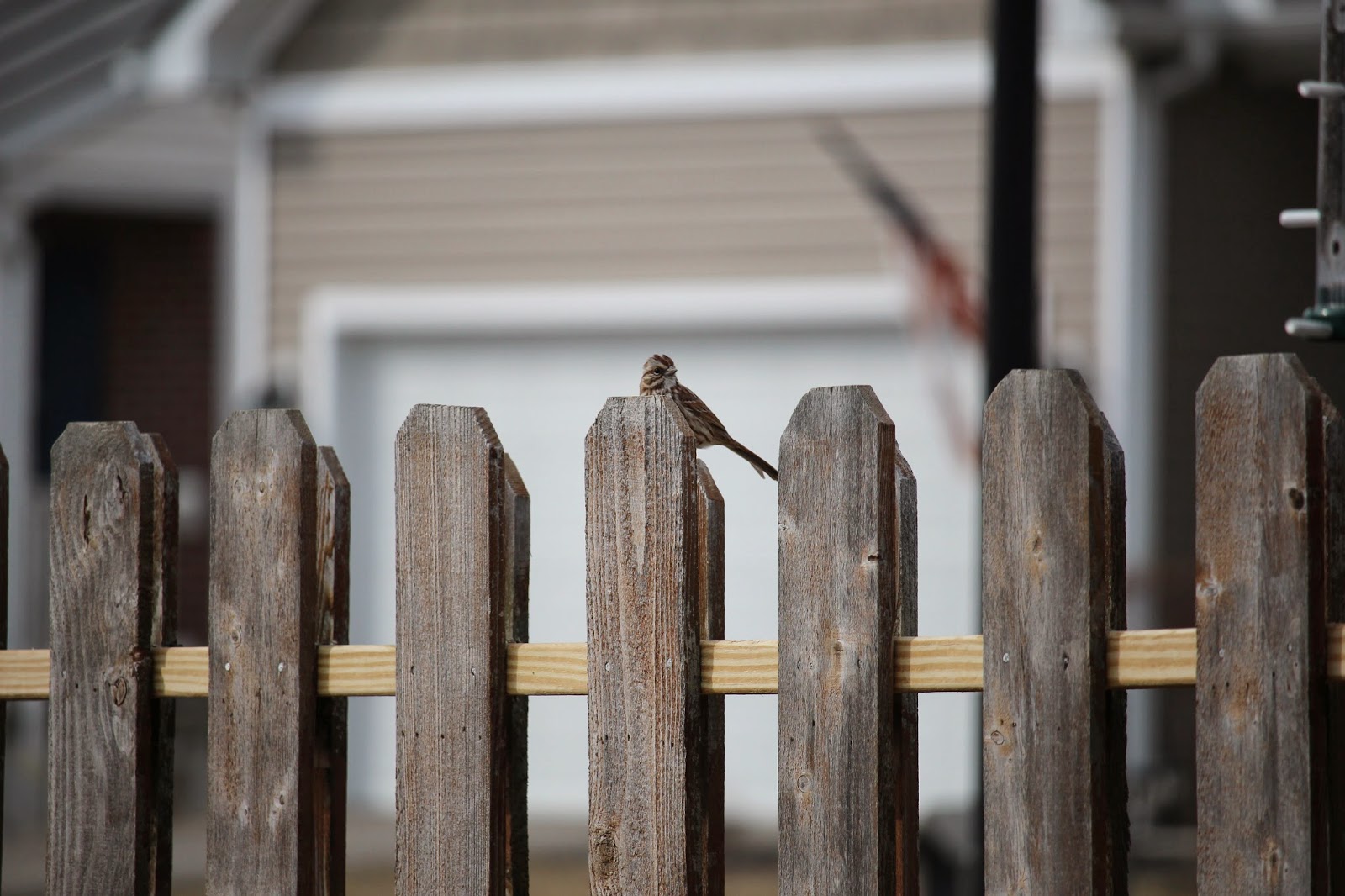 Two other birds which enjoy this mass-emptying are the Junco (slate-gray in this case hopping on the fence) and the Song Sparrow (seen by himself in the photo below).  This particular sparrow is a very vocal sort of chap, and loves to drive my cats crazy by sitting in the bush that sits in the front yard in front of the window and sing until it's lungs give out.  I tend to only see one of these at a time, so am inclined to think it's the same bird over and over, but I could be mistaken.

One misconception that I've had myself over the years is to believe that the birds you see out in your yard are the same birds.  Now, it's possible.  However, many times if you see a species you are unfamiliar with, they are simply migrating through.  Quite a few species, especially starlings for example, might appear in your yard multiple times during the week but then they move on in their large flocks and won't come back until months later, even though you've seen a very similar group come by once a week, normally these aren't the same birds. 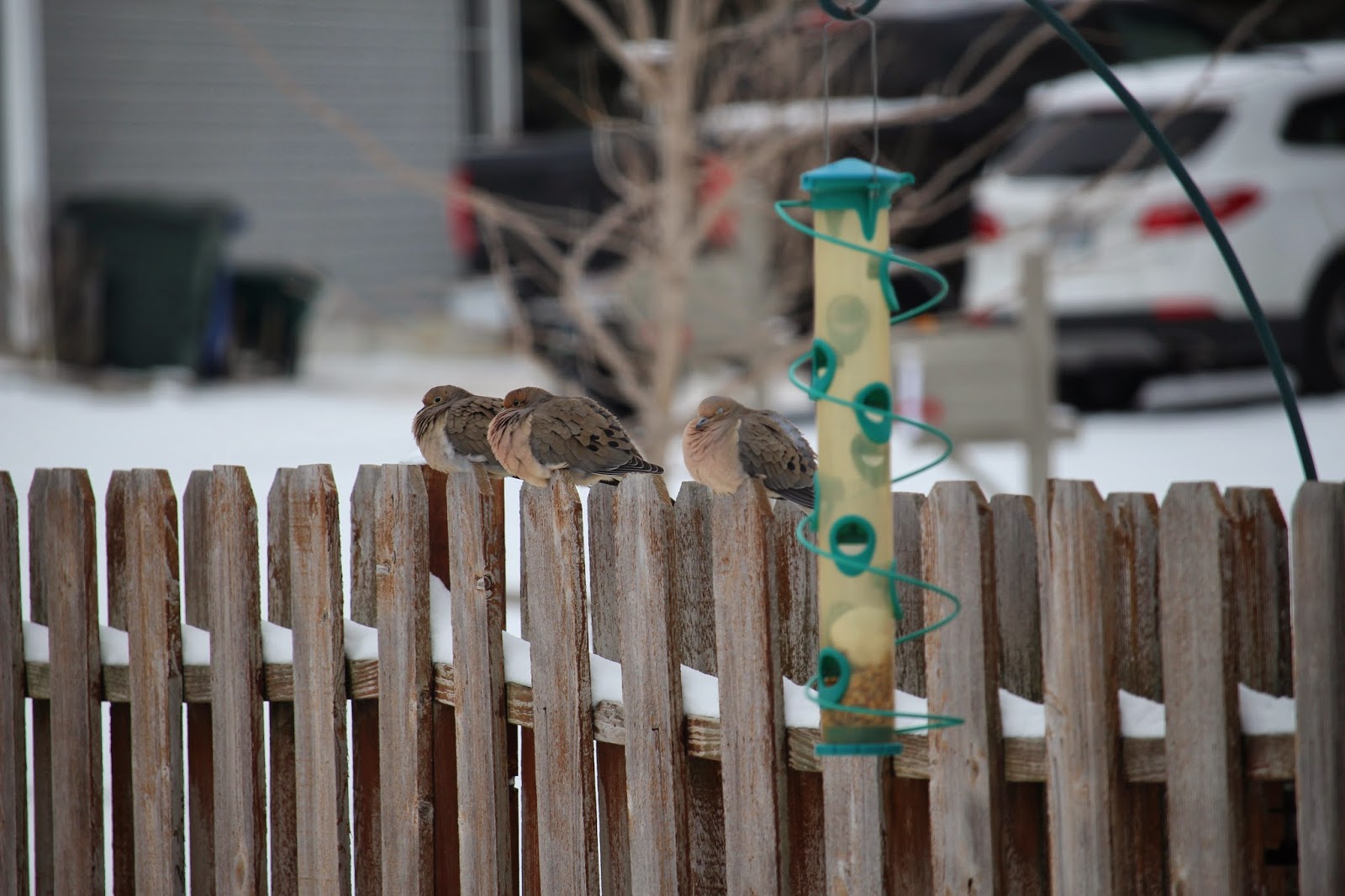 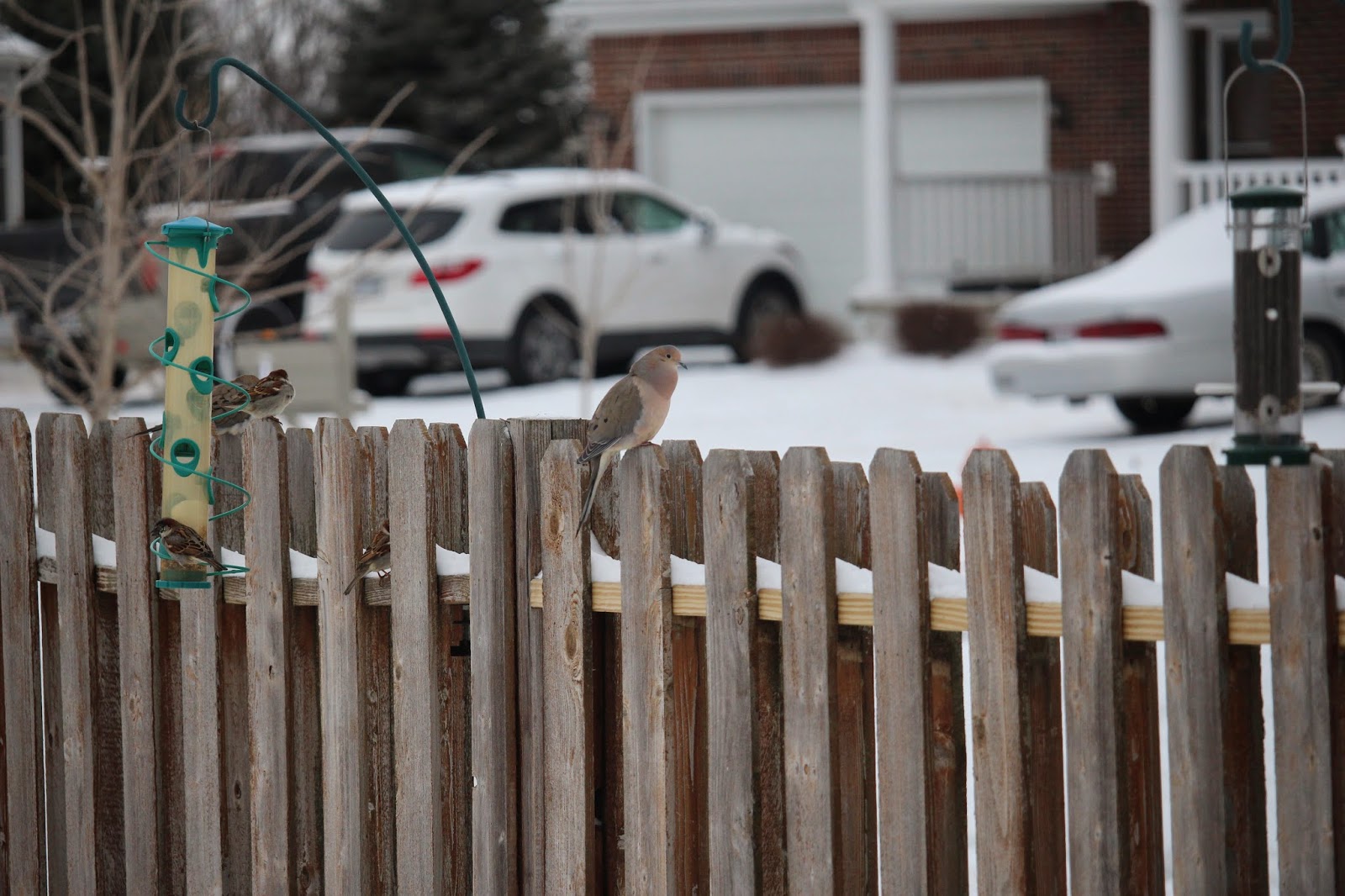 On the other hand, my mourning doves do return year after year as I've taken pictures of them to compare coloration and markings.  Doves like to find a good nesting ground and they will return.  My group, as I explained before, were just a single nesting pair that chose to use my fence for their nest.  Since then I never count more than seven birds at a time, have watched the most recent three grow up from small babies.  A few in this group are almost pink in color.  Some are avid singers (as seen in the photo below where he's belting out a tune), though others sometimes coo quietly, the loud singers tend to wake me up by sitting on the fence under my bedroom window.

Mourning doves are prolific breeders and can nest multiple times during the course of the spring and summer.  I have found multiple nests all over my fence line which causes some pretty messy situations after the babies have hatched and choose to poop all over wherever they are currently sitting.  I wouldn't encourage this behavior necessarily as it takes a lot of scrubbing to get bird poop off of porches, chairs, tables, fences, etc. 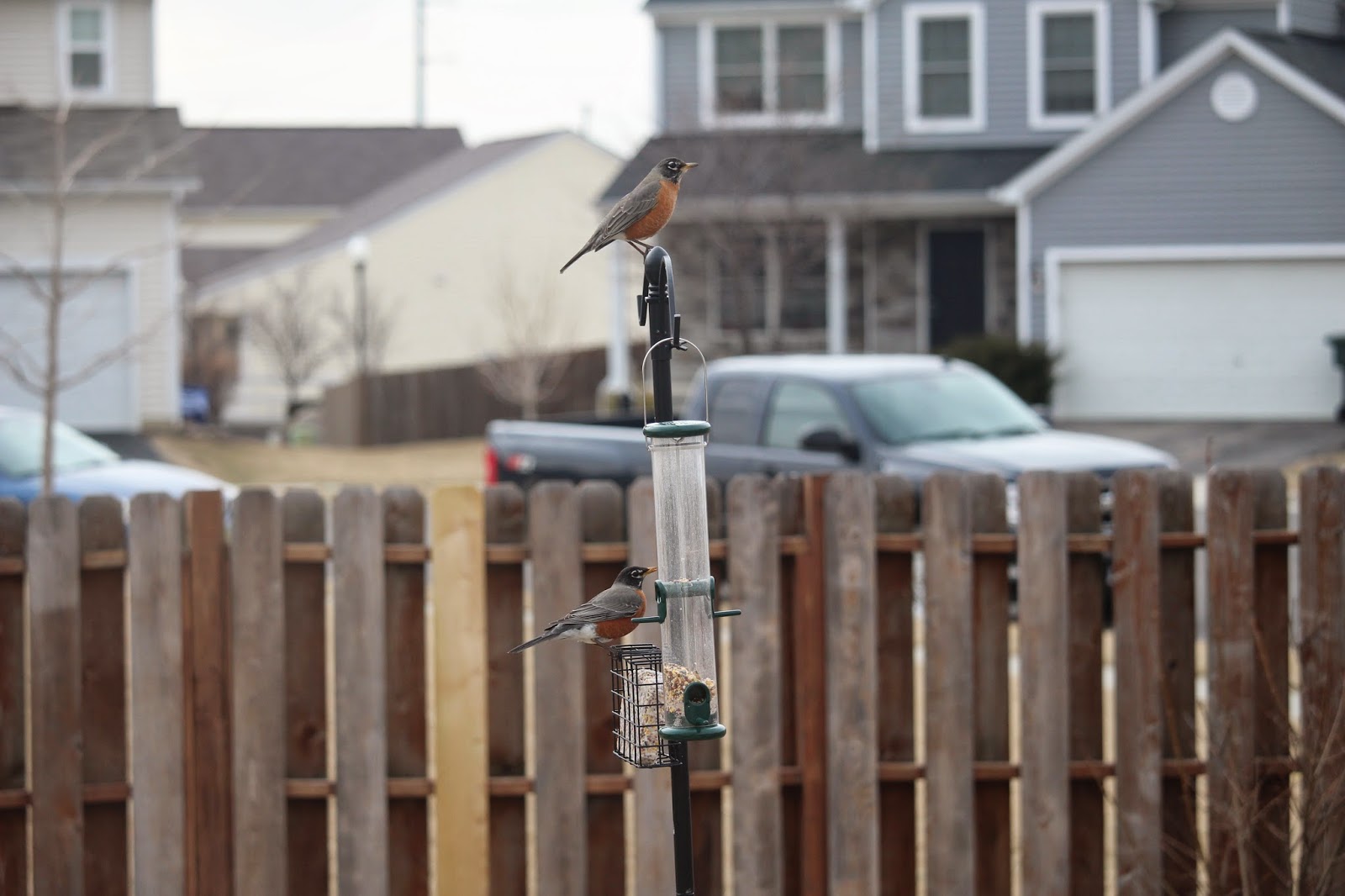 Another popular bird that can be spotted without a bird feeder is the robin.  Growing up in Michigan, this was our state bird so if you didn't know what a robin looked like you were pretty much stupid.  I remember children coloring in our state bird to look like a blue-bird (blue with a red breast) and would have to argue with them that robins are more brown or gray.  Pale robins without the darker head as seen in these photos are females.  I caught two males sneaking suet from the feeder.  Worms and bugs are tough to come by after this cold winter so these two hung around for a few days before moving on. 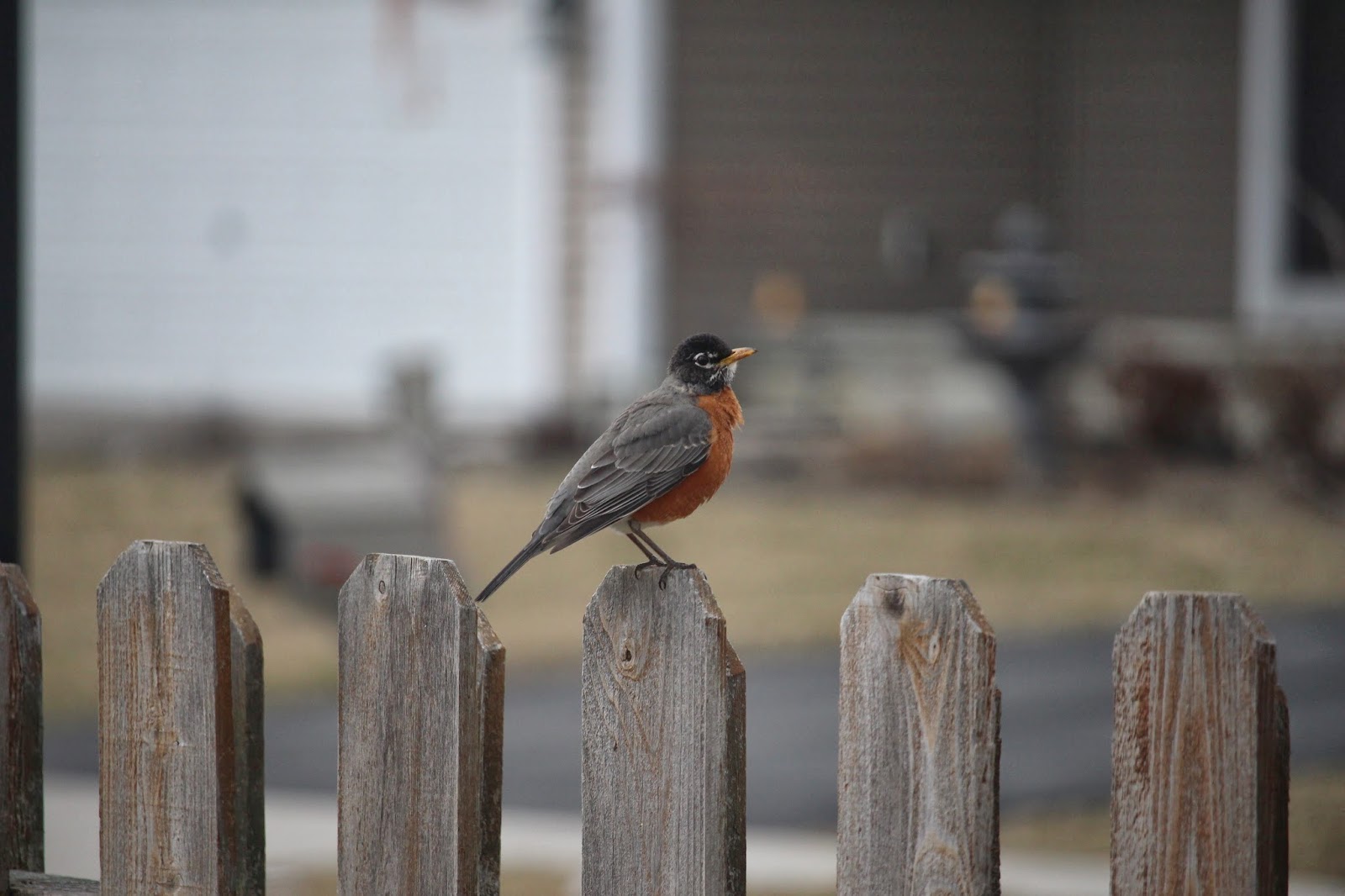 Just like starlings, robins migrate.  Often they don't stay around more than a few days, unless they are nesting, that is.  I have had a nesting couple in the maple in my front yard last year and have had a few fat little baby robins pooping all over the porch.  I suppose I need to do a short blog on baby birds sometime this spring to show off some of these photos I've taken over the past few years.  However, because robins migrate at the first signs of cold and then return at the first signs of spring, they are good indicators that spring is coming when they show up.  My mother always believed spring was here when the first robin showed up in Michigan.  However, warm weather typically is marked by the red-wing blackbird.  Unfortunately, even though I have had two of these visit my feeders this year already, and can hear them singing by the train tracks near my house, I have been unable to photograph the buggers. 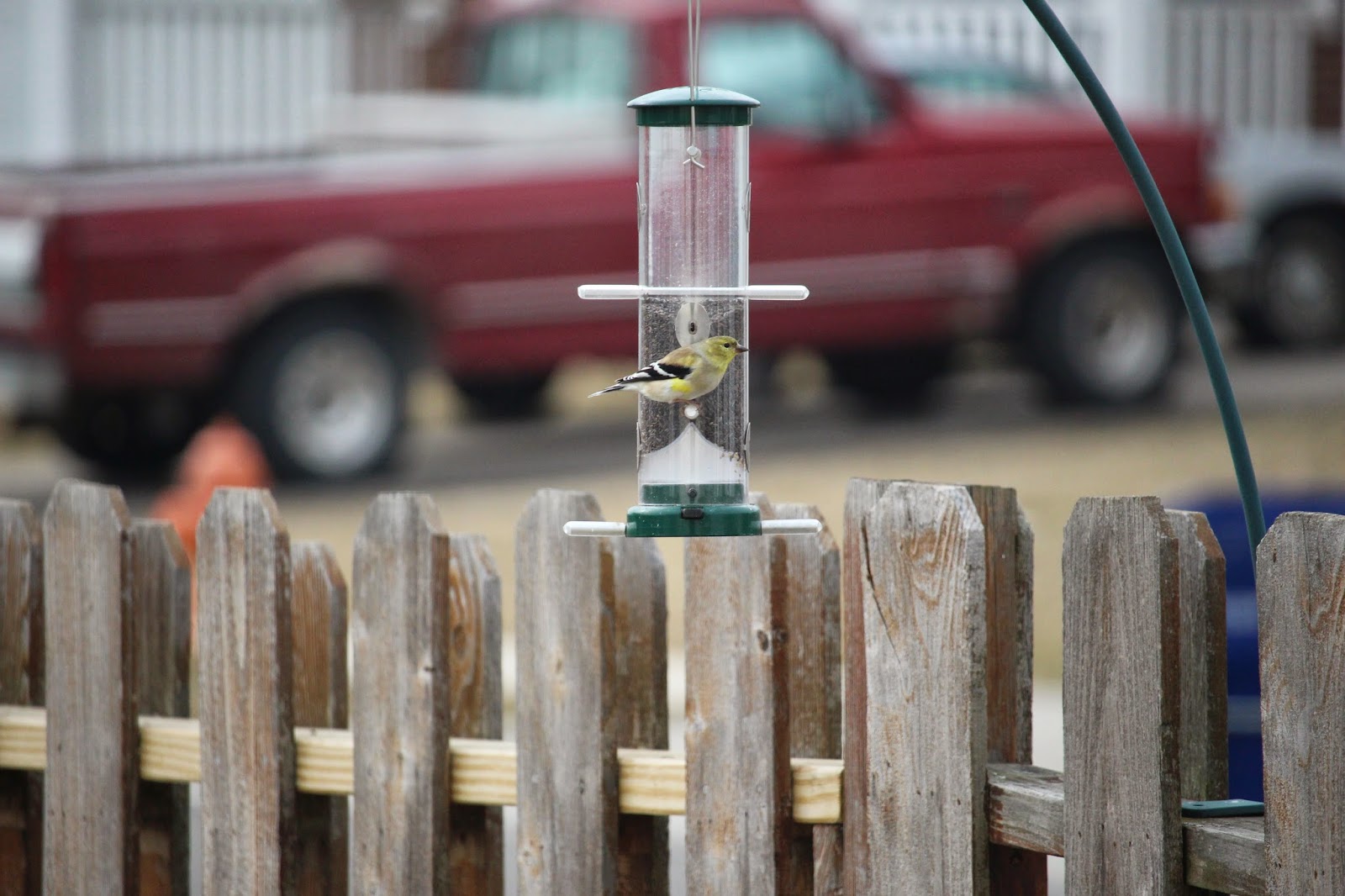 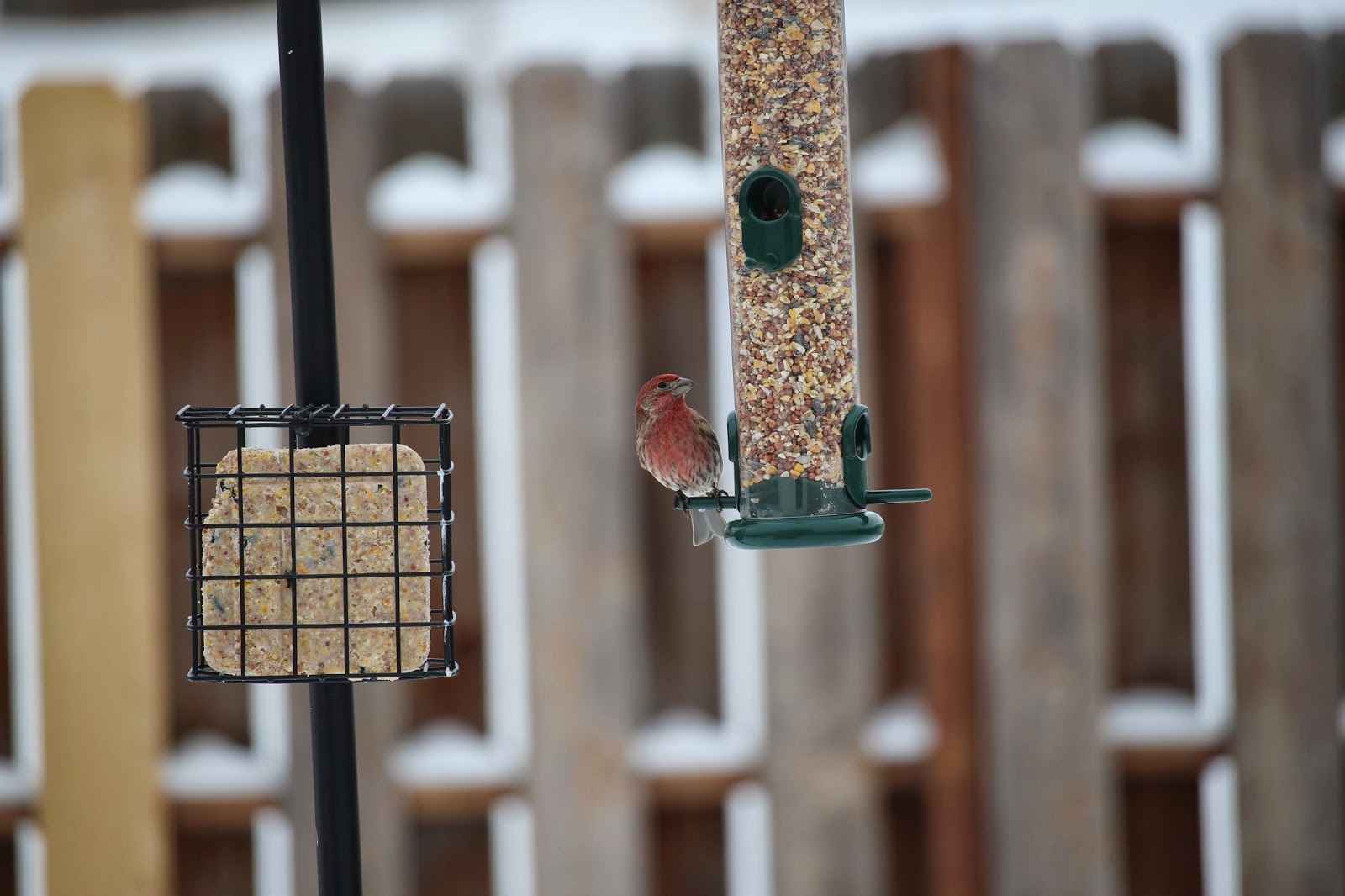 Now to change tracks just slightly and visit the prettier birds that I've been able to attract to my feeders.  This is the smaller thistle feeder which attracts mostly finches.  Gold Finches, in this case, have been visiting since early February, and I tend to see these birds year round in Ohio, so it's possible they don't migrate nearly as far if they have a good food source.  This male is just starting to show his summer yellow.  During the winter the main distinguishing feature of a gold finch is its black and white patched wings.  They are darker than any other species I have locally and even when the birds are brown in the dead of winter, it is easy to tell which type of bird they are.  As the month wears on this male will shed the brown feathers and become bright yellow.

Another less noticeable finch is the House Finch (not to be confused with the house sparrow) which has a red coloring on its face and chest.  These pretty little birds often show up about the same time as the sparrows and I've seen them fly off together in little groups and next together.  They're about the same size, but the males are brilliantly colored. 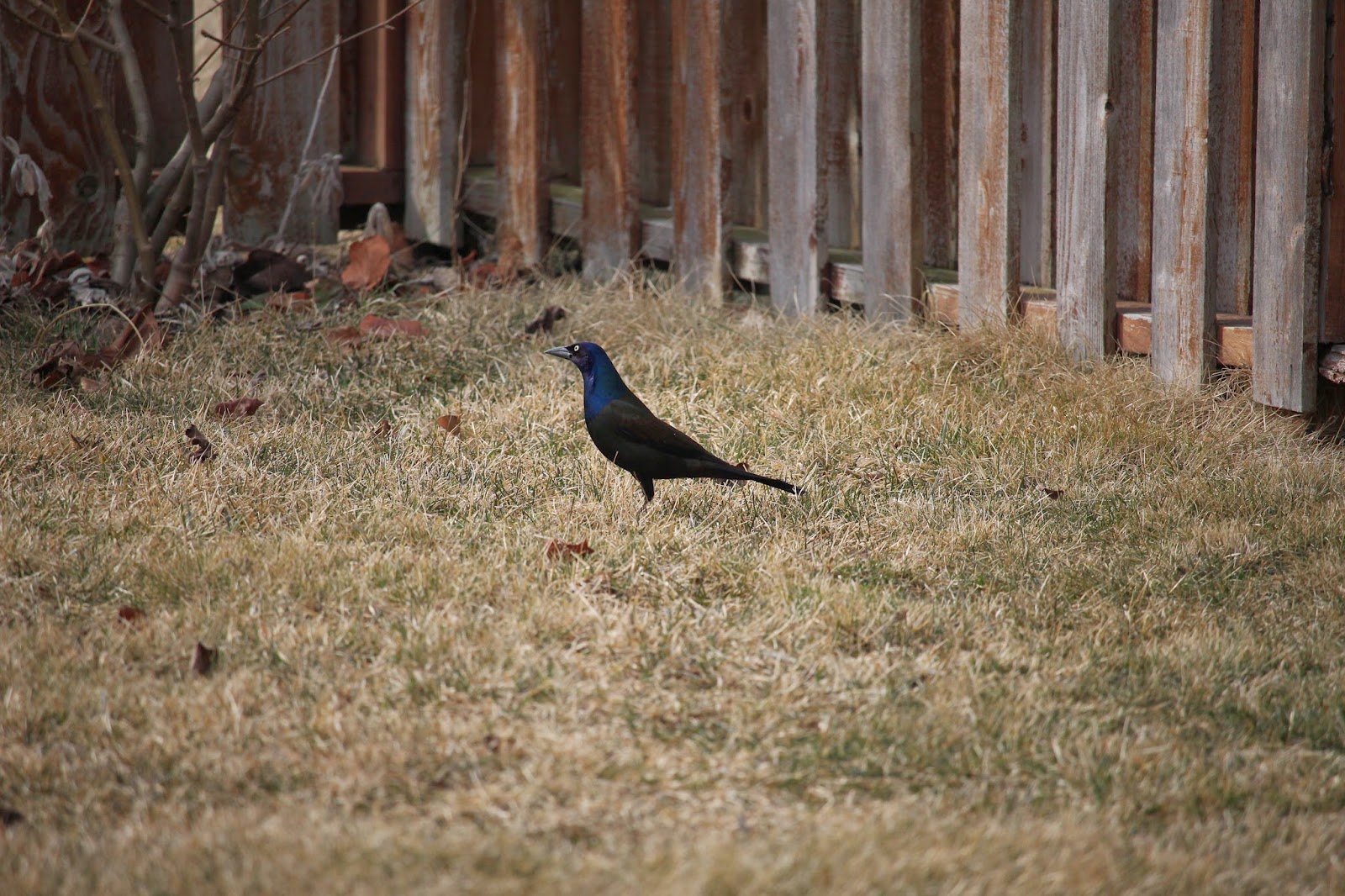 The last birds I will cover for now are also two very flashy birds.  One probably wouldn't include the Grackle as a 'flashy bird' but I believe they are one of the sharpest birds that grace my backyard.  There is something about this jet black bird with the purple/blue/green iridescent head that just really stands out to me.  They tend to stay in groups and sometimes appear with starlings or red-wing blackbirds.  This one will call his friends to come over when the feeder is freshly filled and they will do everything possible to empty the feeder so they pick from their favorite seeds. 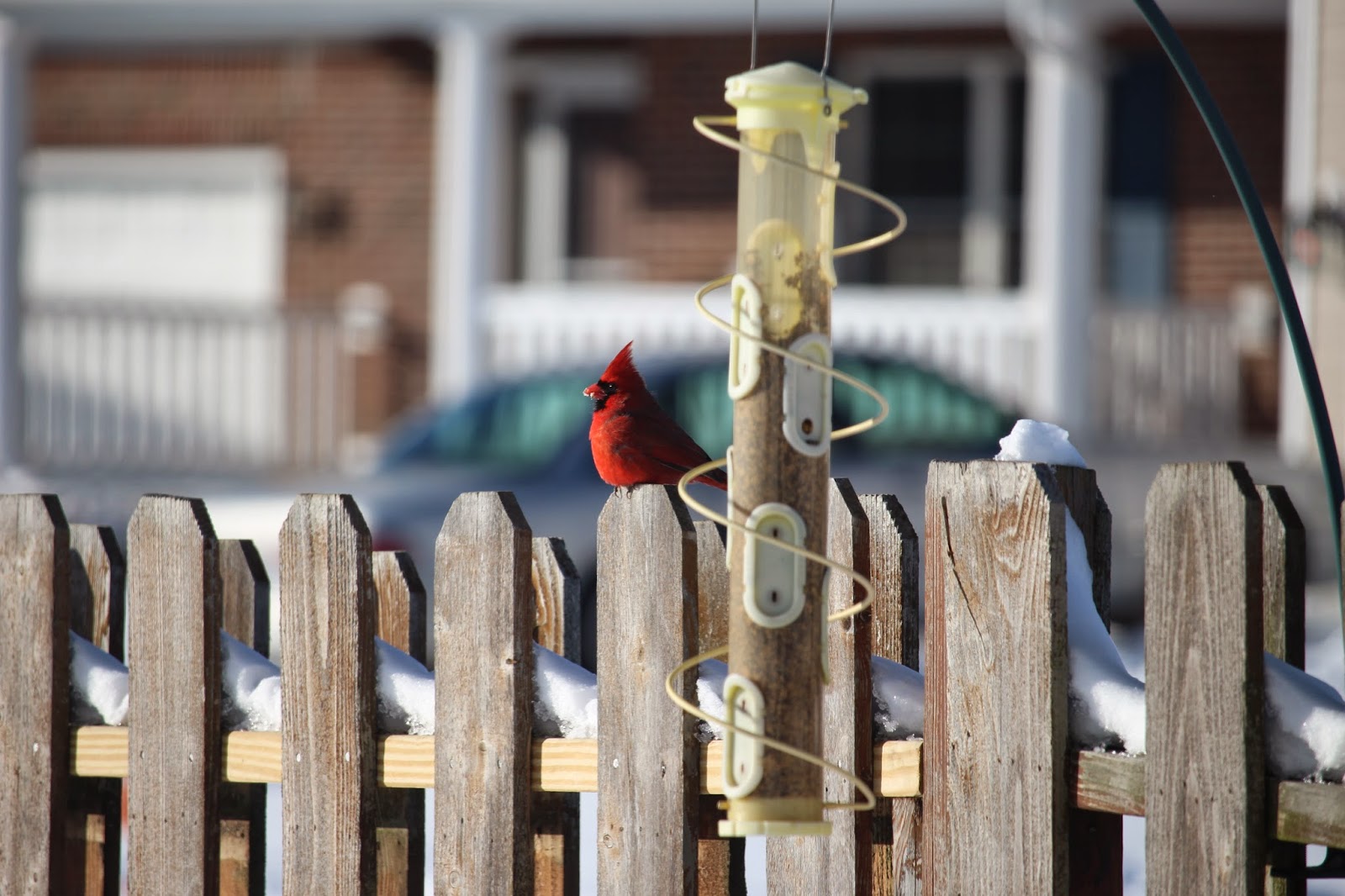 The cardinal is one of the most recognizable birds in the Northeast United States and oftentimes people know what this bird is even when drawn in very abstract ways, so long as it has red plumage and a black face, most people know the name of this bird.  Females are more brown, but still as recognizable.  Perhaps this is the reason that so many states (including Ohio and West Virginia and many others) actually have this bird as their state bird.  I've had a pair of these birds at my feeder, but they really loved my sunflowers last summer, so they tend to like larger seeds in the feeders.

For now, this concludes your backyard bird watching lesson!  For now I'm concentrating on birds I've taken photos of only this year rather than ones I've seen in previous sessions (plus the photos are prettier with the new camera).  Be sure to click on the photos to see the large versions as some of the earlier photos have a multitude of birds in various angles in flight.  I hope you've enjoyed this short lesson in bird watching!

I'm not sure what the next blog topic might be on, perhaps cooking.