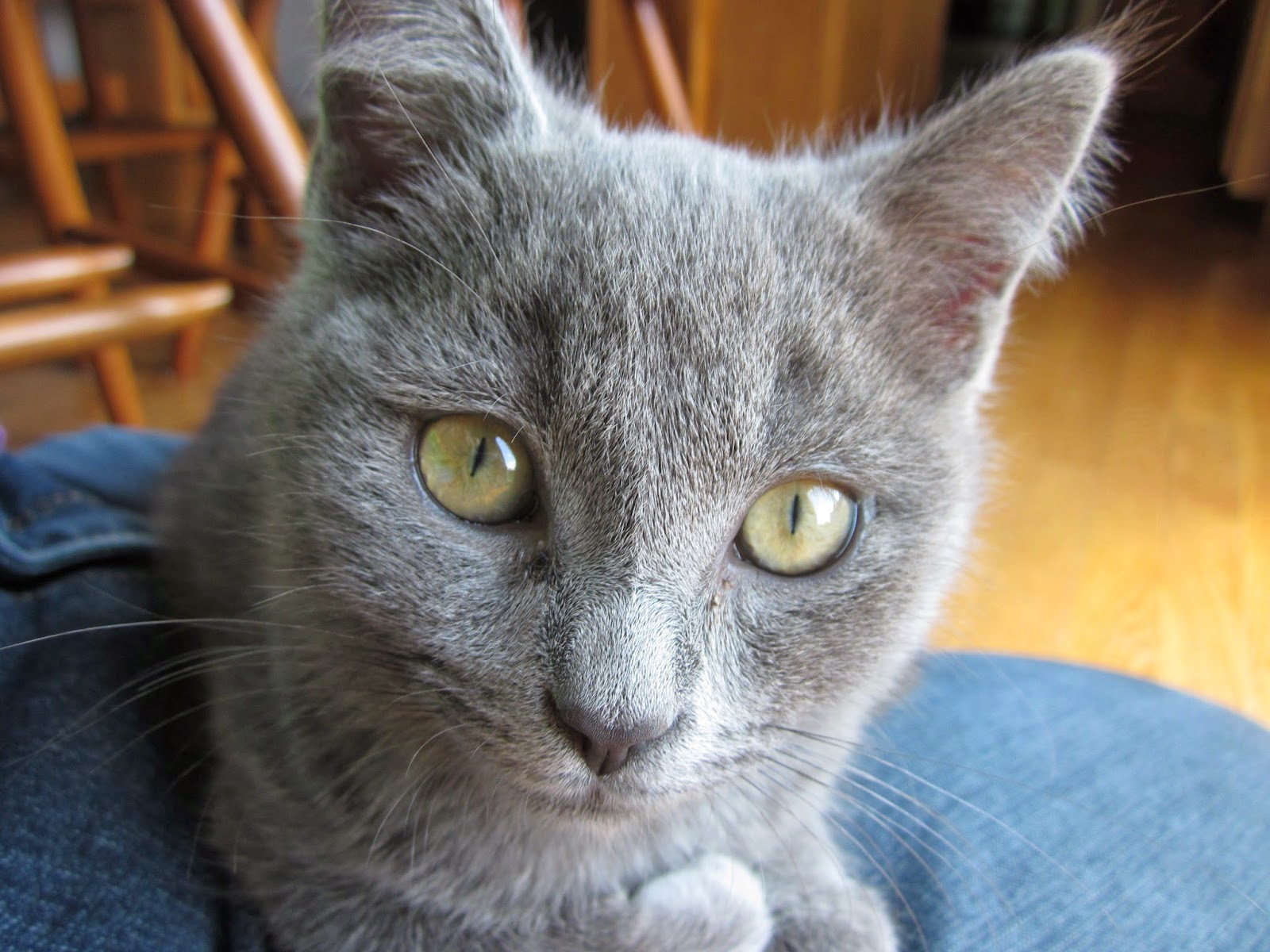 The cat journals this week conclude with Olivia; cat number one.  The story of this little gray fluffy cat starts when we bought our home.  In fact, maybe even before we bought our house as I was dreaming of a cat from the moment I moved into a cat-free apartment building with my then boyfriend (now husband) who also wanted a cat.  We waited out the three or so years in the apartment until we could afford to get married and get a house of our own.  And in January of 2011, we walked through the house that would be ours and I could picture certain places in the house and how a cat would be in those areas.  There's a small ledge at the top of the staircase that I imagined a cat sitting on waiting on us to come out of the master bedroom.  I imagined how they would like to wander up and down the stairs and peek out through the railings.  I got pretty sentimental about the house even before we were finished house-hunting.  This wasn't a beautiful home by any means as there were so many things that needed to be fixed before adding a pet to our home.

But by spring, we were popping into pet stores and looking at adoptable cats.  I saw a particularly cute one around April or so of the year and begged my husband to let me fill out the paperwork to adopt it.  I'm going to put this right out there though - adopting through a pet store that's just showcasing cats for other shelters is a bad run.  It took us a lot of time to even get the paperwork from a cashier who said it wouldn't get faxed in until the morning, and then we waited a week to find out that they had never faxed it in, nor had they even any record of us filling out the paperwork, and oh...by the way...the kitten was already adopted.  Too bad, so sad.

Frustrated by the whole thing it would be another week or so of visiting the local Humane Society and a last-minute evening trip that would give us only about a half hour of looking time when I spotted the kittens in the front glass enclosure.  A gray kitten!  Just like the one I'd seen at the pet store!  I rushed in, almost bumping another woman out of the way in my efforts to grab for the kitten... and some how this little gray furball actually came up to me.  I scooped her up and except for when we got to play with her in the little bonding room, I hardly let her out of my arms until the paperwork was signed and she was in the new carrier on our way home. 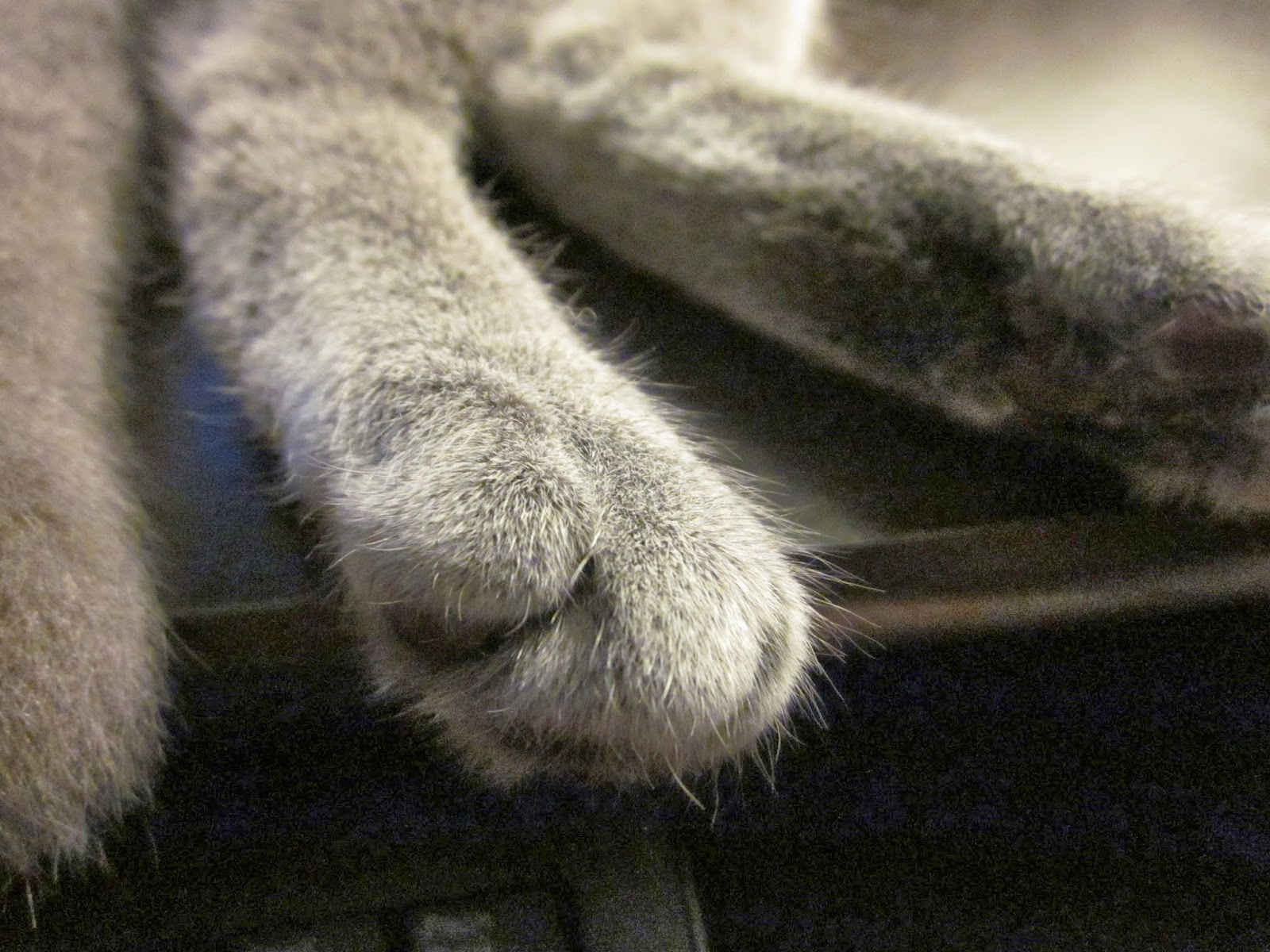 As you might be able to tell, Olivia is my first child and my favorite.  Mina might be an adorable, purring cuddler, and Tenchi might be a rough and tumble head-bumper, but Olivia is my buddy.  Her name at the Humane Society was "Brioche", although I have no idea why they'd name a gray kitten after a type of bread.  We were fans of the television show "Fringe" and that's where Olivia's name came from.  She was every bit the strong female lead in the story that would become our family of cats.  She still is, in fact, as she's able to strand lying near Tenchi and jump neatly away from his advances of playtime.

Brave cat that she is, Olivia scales the highest heights of the house, managing to climb on just about anything in efforts to get to a good vantage point.  She climbs the rafters in the basement, managed to get up to a ledge at the top of our cathedral ceiling bedroom by balancing on a bedpost, can make it to the top of our kitchen cupboards...well, you name it, she's gotten up there.  She's lightweight, and small, only about 7 to 8 pounds on her heaviest days.  Small pink toes, a warm pink-gray in most lighting situations, and an extra-thick layer of fur that is almost wavy.  Unfortunately that also comes with a ridiculous penchant for shedding and even worse when she lays next to my face in bed and I get a mouth full of fur! 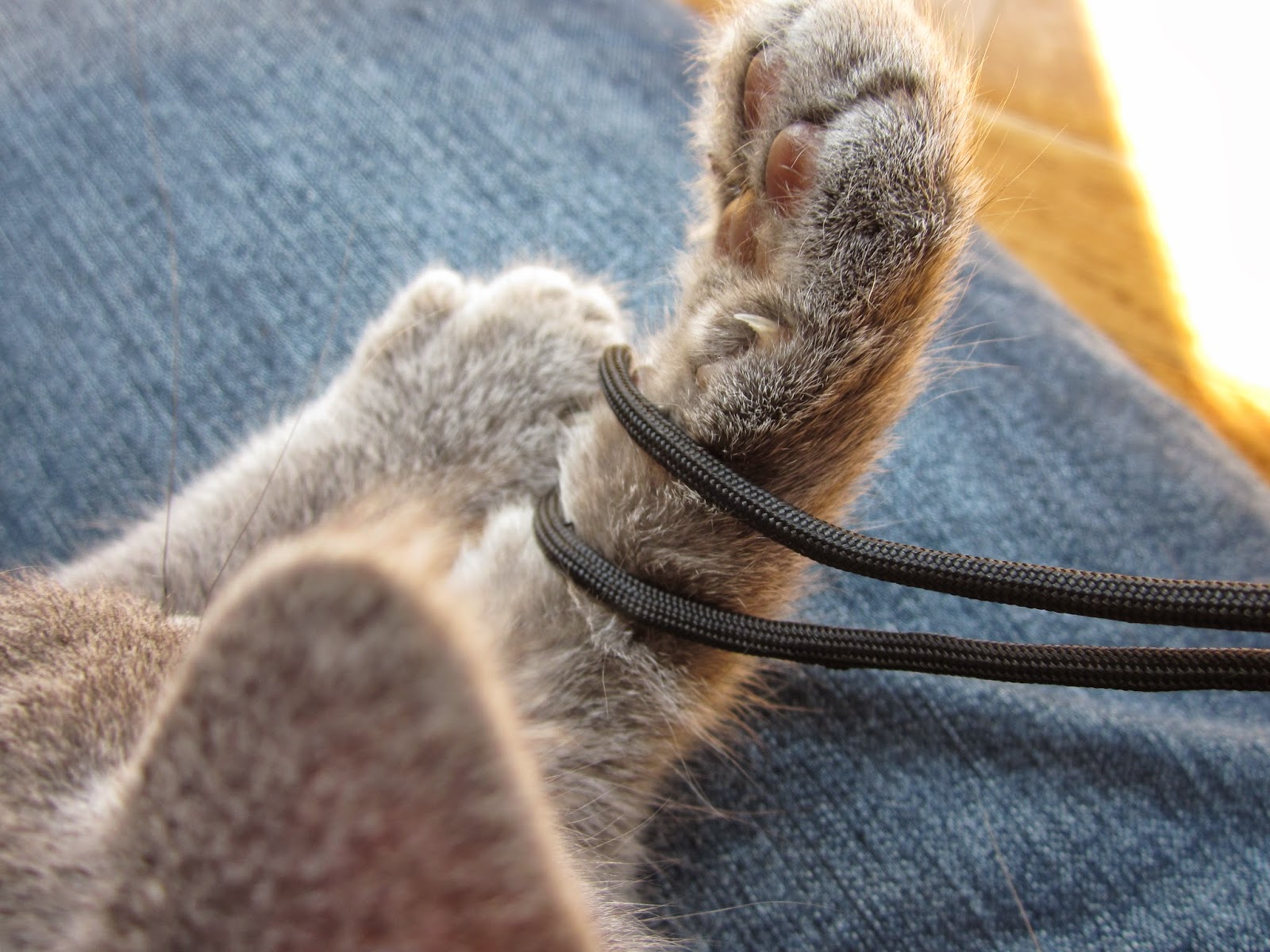 When Olivia was a kitten we would get up every morning and make an effort to play with her.  Sometimes she would get so excited she would start panting and have to lay down.  It took us awhile to figure out this was normal and even good to wear a cat out like this, but our first time cat-parent selves were always cautious of her.  She fell off a tall shelf in the basement at one point, hurting herself and she limped for a day.  Another week or more went by with Olivia squinting and barely opening her eye.  This was followed by a week of wearing a cone and putting in eye drops prescribed by the vet.  And then followed by the realization that Olivia squinted with that eye when she was irritated with us for bringing home Mina.  In fact, she squinted more for putting the medicine in her eye so that when the cone was removed and the drops ended, the squint only reappeared when she was irritated.  That was a couple hundred dollars and lots of cat humiliation that could have been avoided! 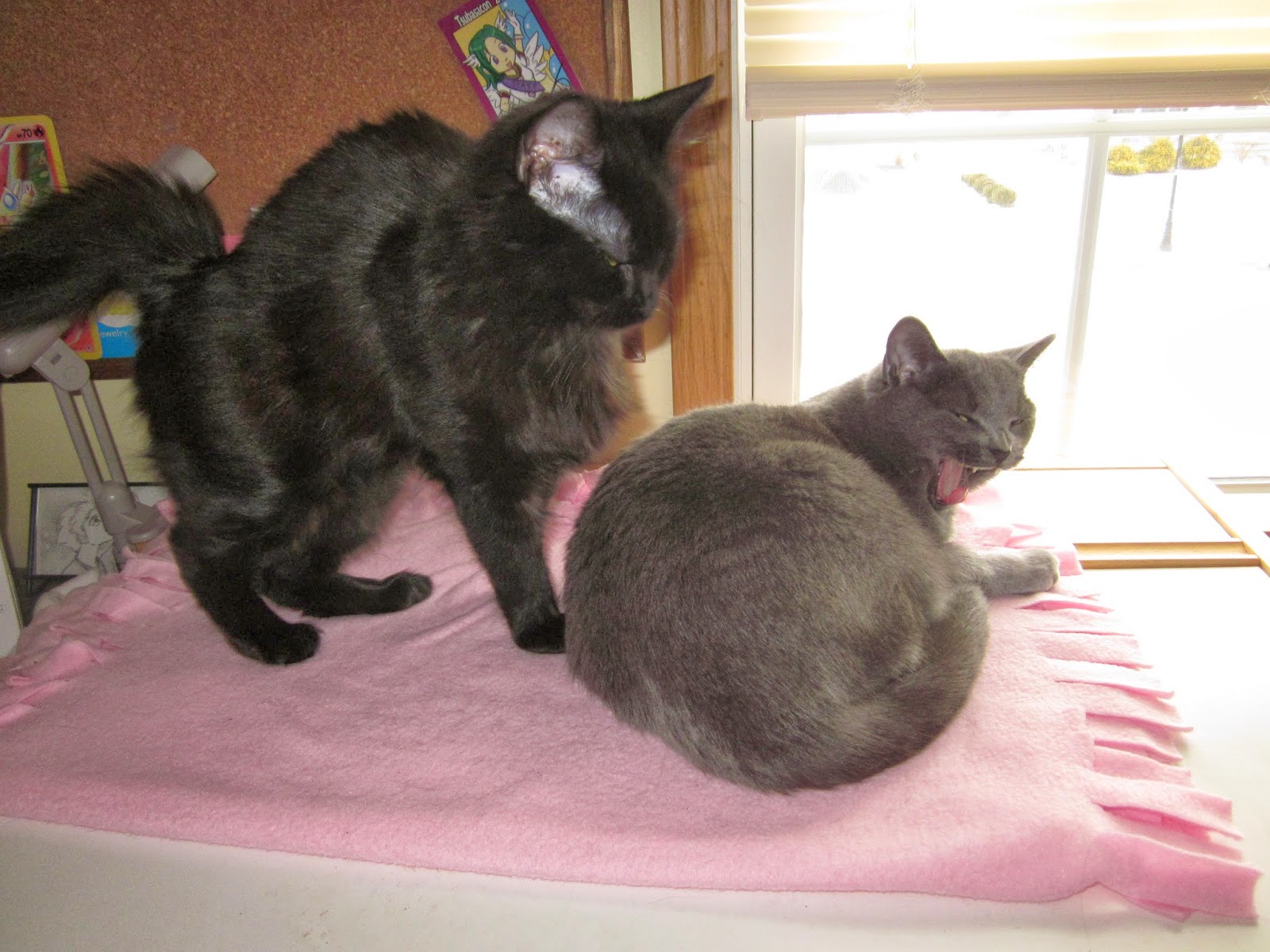 Olivia still likes to play, but she doesn't like to do it around Mina.  Even when Mina was a kitten Olivia wasn't a fan of her younger sister.  They would tolerate one another at windows and in sunny spots, but if Olivia was playing with a feather toy in one room and Mina popped in, all interest in the toy dropped and Olivia simply walked out of the room as if she were never playing at all.  It took nearly a year before she would return to asking for playtime in the mornings and they went from long, pant-inducing bird hunts to short, crazy jumps until Mina joined the fun and then she would watch from nearby until Mina tired out enough for Olivia to return to her playtime. 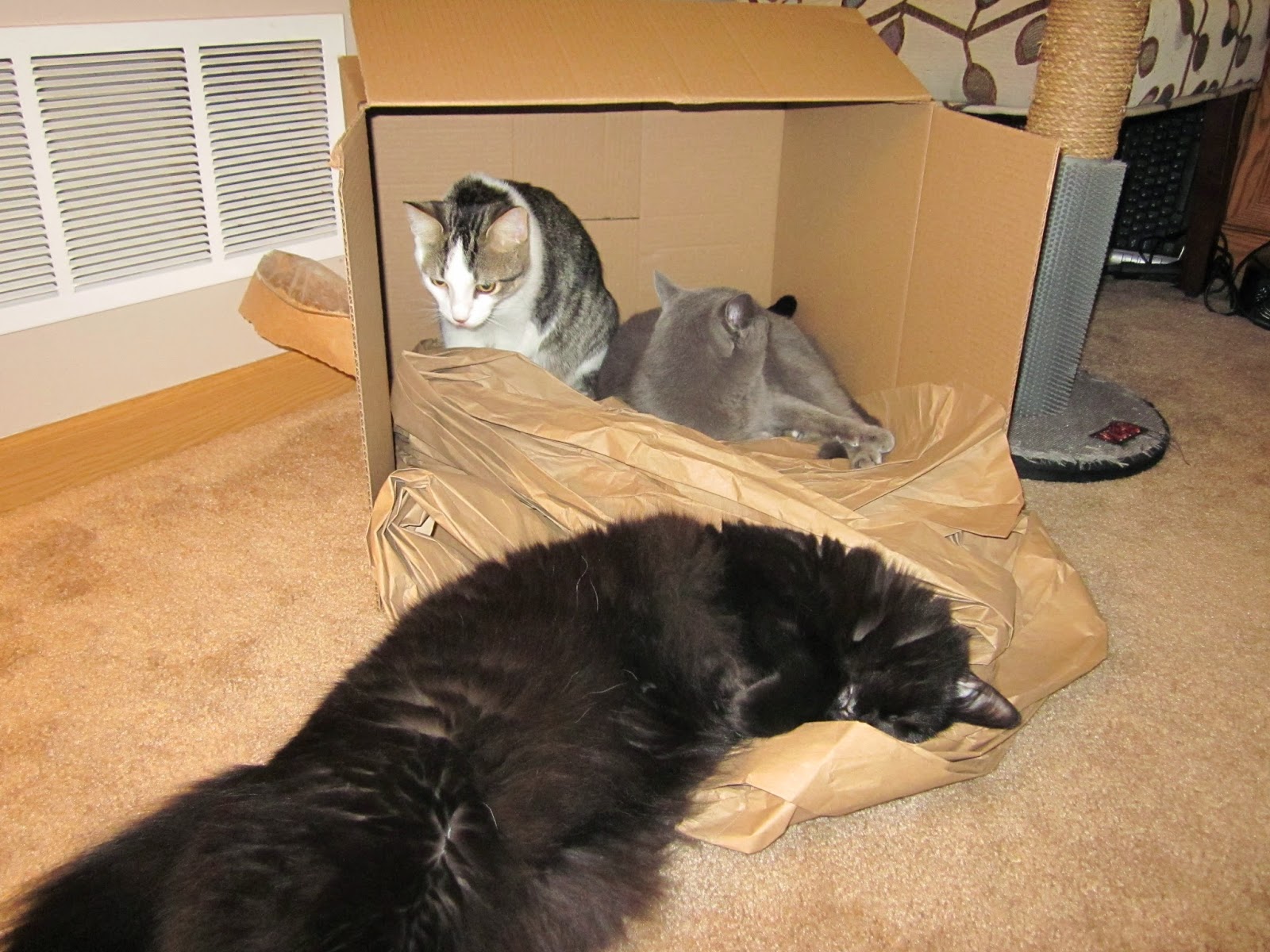 Introducing Tenchi a year later after that and Olivia returned to her snooty "I don't want to play now that that is here," attitude, and again she fell silent to asking for playtime for nearly another year.

Jump back in time now since I forgot to mention how much of a vocal little thing this cat can be.  She asks to play.  She asks to have her 'snicky-snack' (aka hairball medicine which I'm sooo glad she takes on her own since she has such problems with hairballs).  She asks to go out to the garage.  She asks for closet doors to be opened.  She meows at ceilings and random spots on the wall.  She meows in the half-bath on the first floor where, for some reason, she'll howl for fifteen minutes straight if you let her an we're still not sure why three years later.  She chirps when you wake her up from a nap.  She meows to make me roll over to cuddle with her.  Oh yes...she won't shut up until I roll to face away from my husband in bed so that she can knead on my left arm until she feels it's soft enough to curl up against and shove her face in my face and nibble on my nose.  That doesn't happen every night...but it used to before Tenchi arrived. 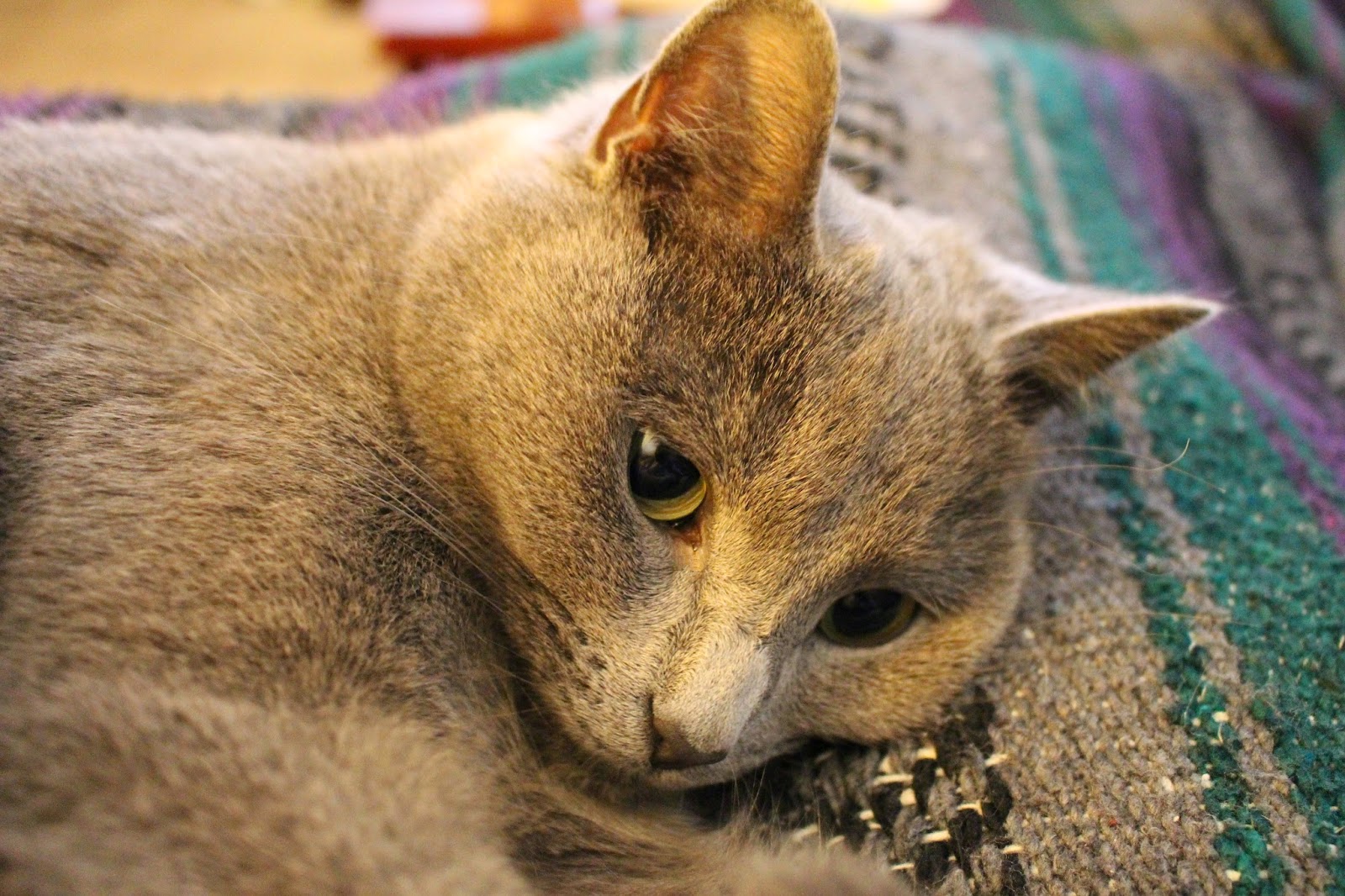 For the most part, Olivia is a cuddler.  She likes cozy spaces like piles of warm laundry, and my computer chair or now, most recently, my lap.  The two girls fight over it, but refuse to share it.  If Mina is on my lap, Olivia will come up and meow at me and sulk off.  Mina will come up to sniff Olivia if she's in my lap and then go lie on the floor with her head on her paws looking at me all pathetic like, as if she were saying "Why don't you love me anymore?"

If Olivia gets chased off of my lap she might go into CRAZY CAT MODE.  I'm sure most cats have this, right?  That moment where the energy builds up so much they just have to release it by running around the house at full tilt?  Some do.  Mina and Tenchi get out most of their tension by chasing after one another through the house or chasing Olivia.  Now, Olivia on the other hand, barely ever instigates a chase (once in awhile, but not usually) as instead she enjoys suddenly going crazy, meowing her head off and doing kitty parcour against the back of the sofa.  Then, if you turn to look at her, she'll go wide-eyed and high-tail it out into the kitchen.  Eventually this act, plus running into the bathroom and meowing to high-heaven, will get her a playmate of one of the other cats and they'll go racing out of the room and upstairs.  There will be the sound of a great thundering stampede in the ceiling until eventually they race back down again and into the basement. 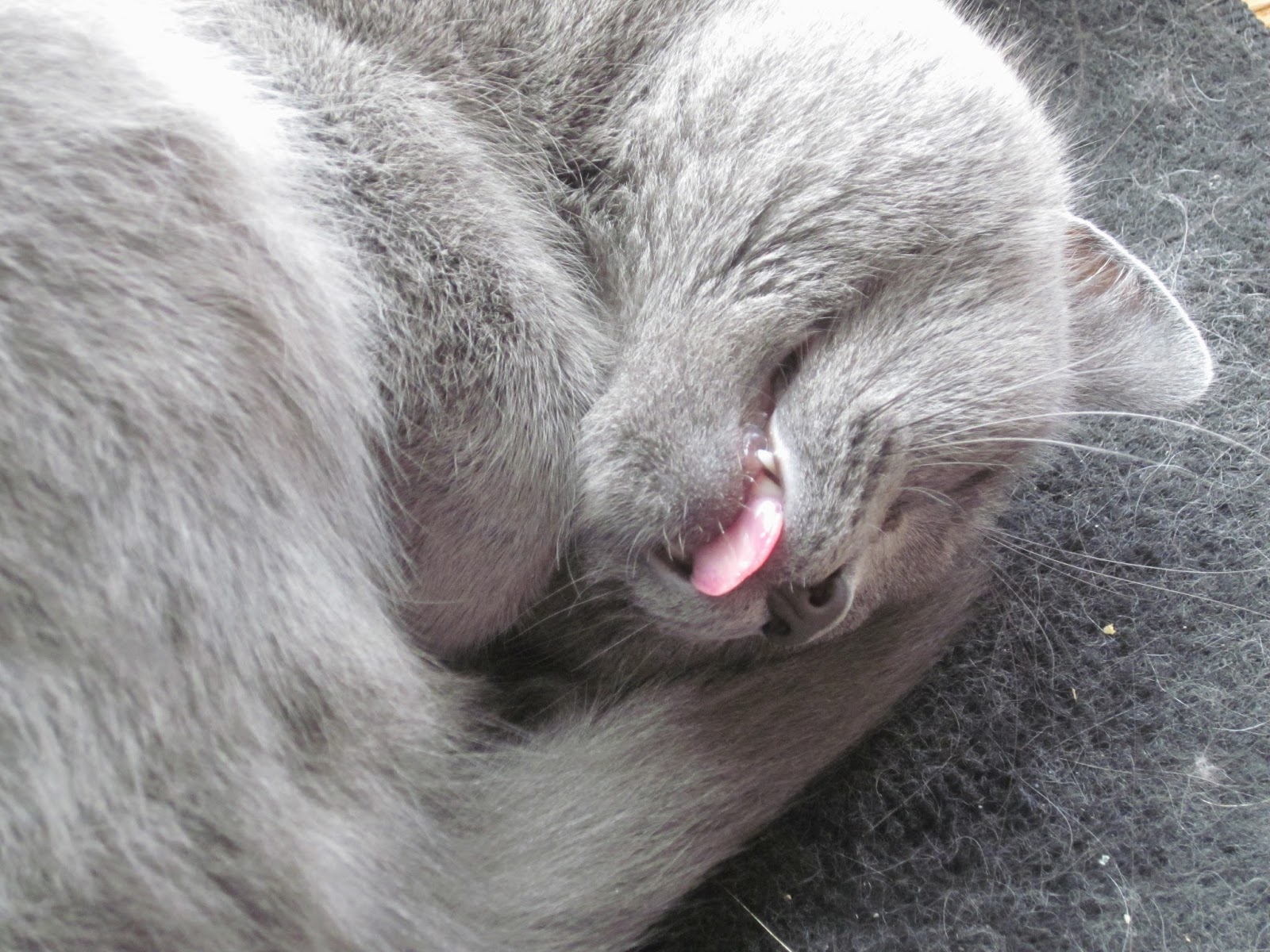 Cats are weird that way, I cannot deny it.  Olivia is for the most part, very sweet.  She doesn't mind her toes trimmed.  She loves to be petted in the master bathroom, even my husband gets love from her there.  She loves to meow at us after we come out of the shower until she gets to rub all over our ankles and hands.  She stays out of the way most of the day by finding a nice place to nap.  She doesn't struggle when picked up, but doesn't like it either, usually using it to her advantage to get a good spot on top of our shoulders to see if she can find a good jumping place somewhere she couldn't reach before.  Her main flaw, I suppose, is that she teaches the other cats bad behaviors like trying to get into the catnip (which we've had to lock up due to Tenchi's aggressive nature and fact he's chewed his way through the butter-tub shaped container we have it in).  But because of her bravery, she doesn't hide from storms and gets to play while the others are hiding.  She will bat at the vacuum cleaner if you get the hose too close to her, but she doesn't stand down.  She enjoys spending time watching TV as well, and I've caught her more than once, en rapt with the moving objects on the screen.

And that about does it for now on the three cats in my household.  I hope you've enjoyed reading about them!  If nothing else...this is my own personal memory at this point in time of my three cats.  As other events happen to these sweethearts, rest assured that there will be new journals posted with new adorable photographs.  I hope you have enjoyed what I've posted as well.

Next time on WhatcherStudios... most likely something about backyard birding as I've been doing a lot of that lately.
Posted by Milly Thompson at 4:31 PM