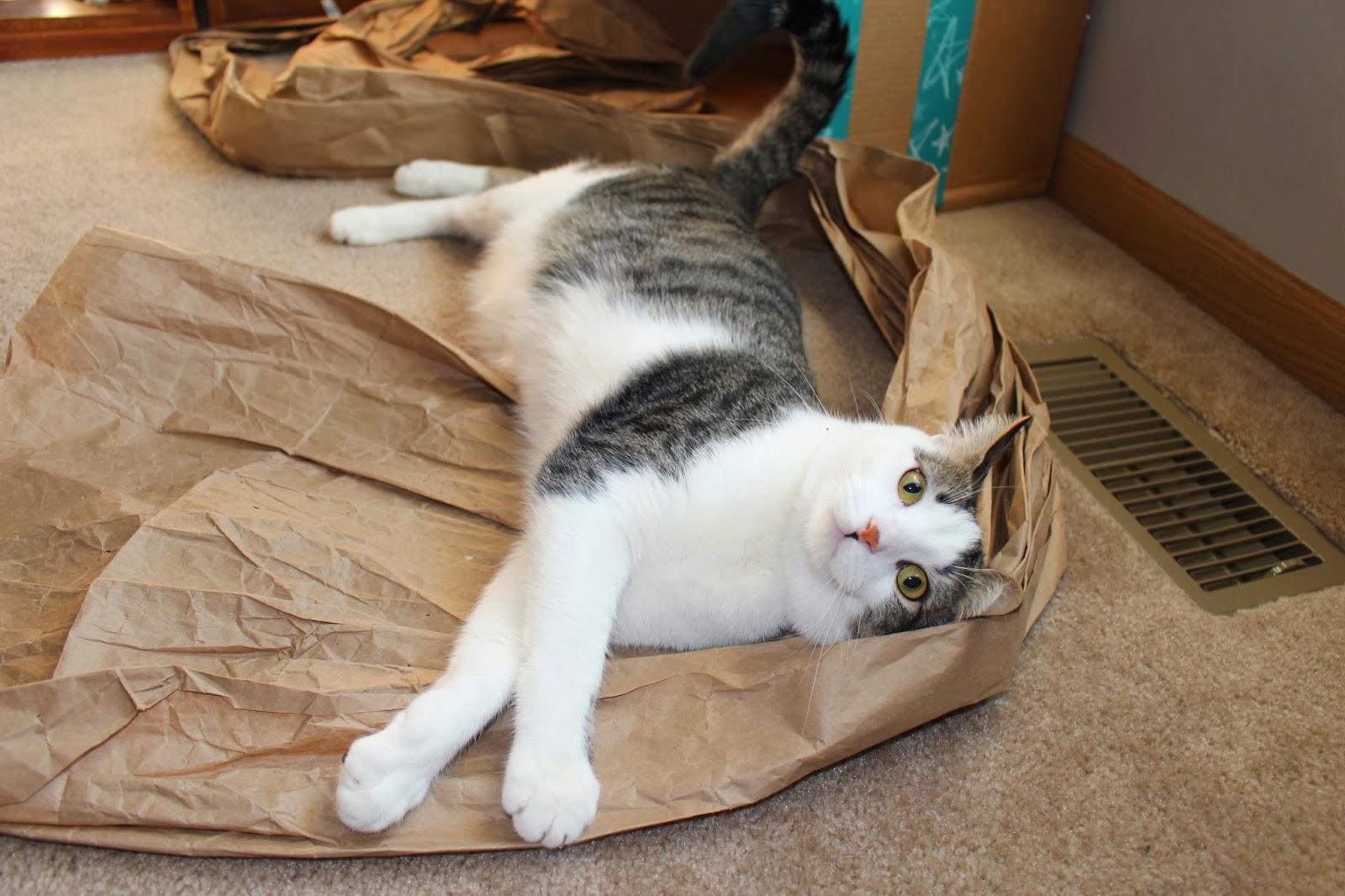 This is Tenchi.  I was thinking about doing a journal for all three of my cats at one point or another to give a basic introduction to their weird quirks so that I could have it for reference in the future.  Any why not?  There are a ton of people out there who have blogging cats and they get tons of hits on the internet from people who like cats.  There's whole blogging sites dedicated to blogs about cats and cat owners and everything in between.
I thought to myself as I was going through the sites the other day that I really should at least set it in stone (or digital stone so to speak) who my family is living in this little two-story house.  So, why not start with cat number three and work my way backwards?  Maybe then you can get a good idea of what a cat household is like.  Cat households are different than dog households or children households, in case you were ever wondering.


Cat number three came to us in May I believe, or 2013.  The reason I can't remember Tenchi's date exactly was that I have his birthday memorized as being Feburary 21st.  His mother was a stray that followed a coworker's male cat home one day.  She had four kittens in the litter, two females and two males.

The two black females and one tabby male were named Izzy (long fur), Squeak (short fur) and George.  They wound up staying with Tenchi's mother as my co-worker adopted her after Smudge, they're supposed father died after being run over. 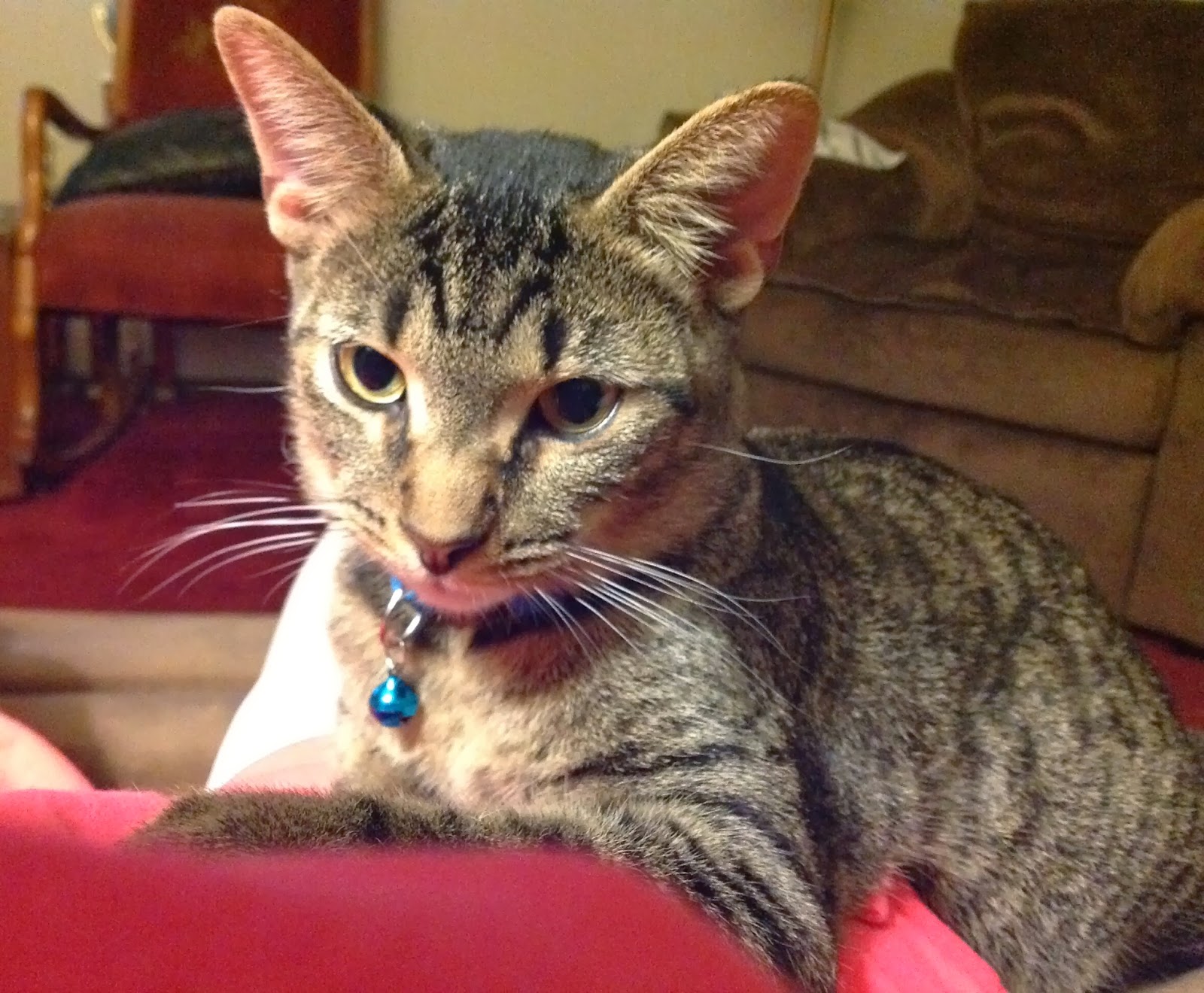 Having been an indoor/outdoor cat, my coworker decided from that point on she would not allow any of the kittens go to a outdoor cat home and refused to adopt any of the kittens out unless they were to be inside cats only.  Tenchi would not ever run that risk as I don't like the idea of outdoor cats at all.  Two of my cats when I was growing up ran into trouble being outdoor cats.  One of which we suspected drinking coolant or some such nasty thing outside and died shortly afterwards.  Of course, in my mom's day, how you treated your pets is a whole lot different than people treat them today.  Even my coworker decided that it wouldn't be a good thing to let them have the run of the neighborhood.  She'd already saved too many strays and later remarked that Tenchi and George's dad may have been a different stray altogether as when a foreclosed house down the street was revealed to be a cat-hoarder's home, one that looked an awful lot like Tenchi wandered the neighborhood not long ago. 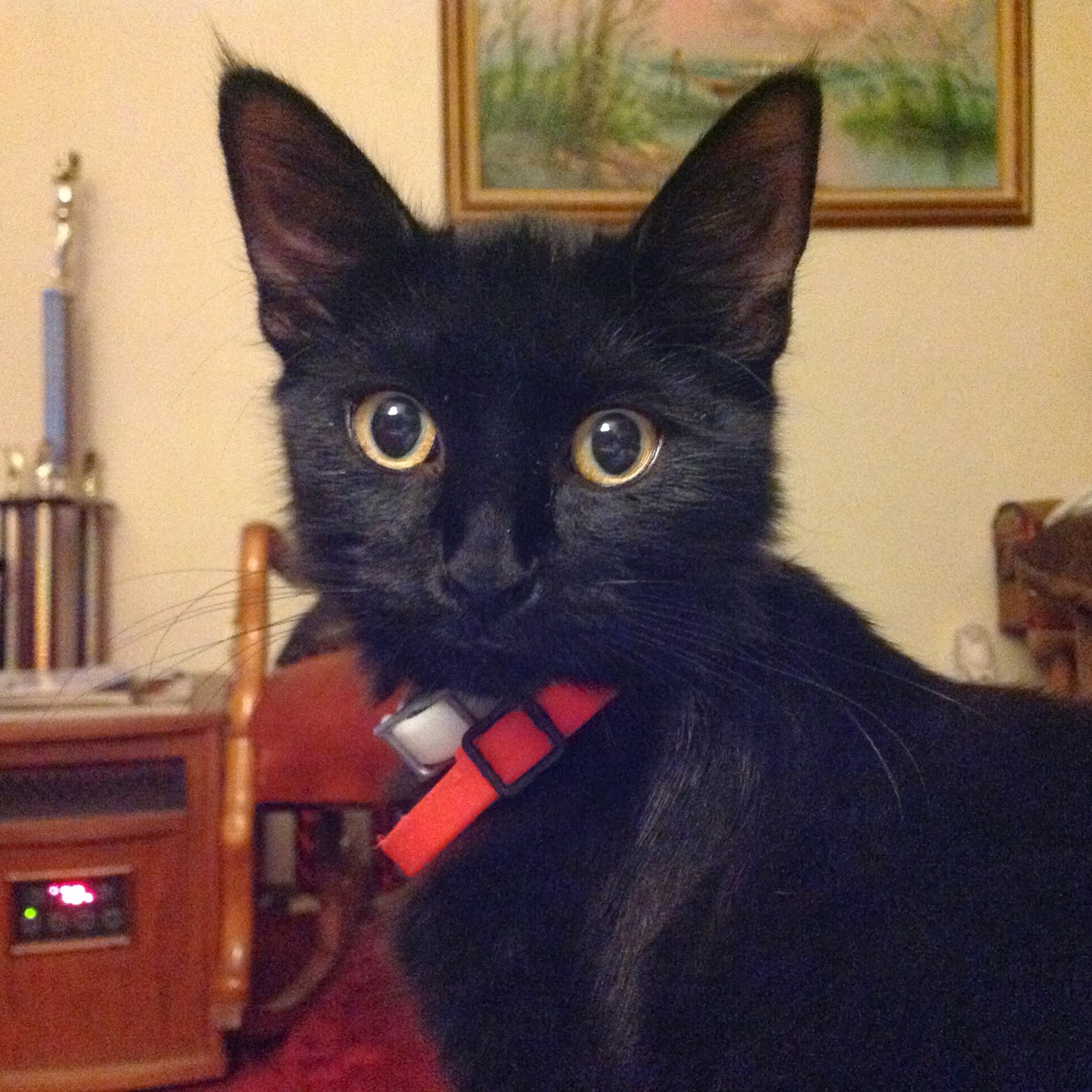 Tenchi was the only one of his siblings to be adopted out, and he was the craziest of them.  My coworker called him "ornery" because he was constantly moving and meowing and running around playing.  We thought to ourselves that we have two cats who love to play and we already played with them quite regularly, so what harm would there be to adding a third to our crew?

What he DOES do, however, is get himself torn up by the other two cats.  The moment we brought him home he was calm and quiet.  He had, after all, been worn down by us playing with him before we picked up him that afternoon.  I could have had my pick of any of the kittens.  I could have pulled out the quiet George or the scared Izzy, and if it hadn't been for Squeak being a black female (which I already had) I may have picked her because she'd come out to play when Tenchi was panting in the corner. 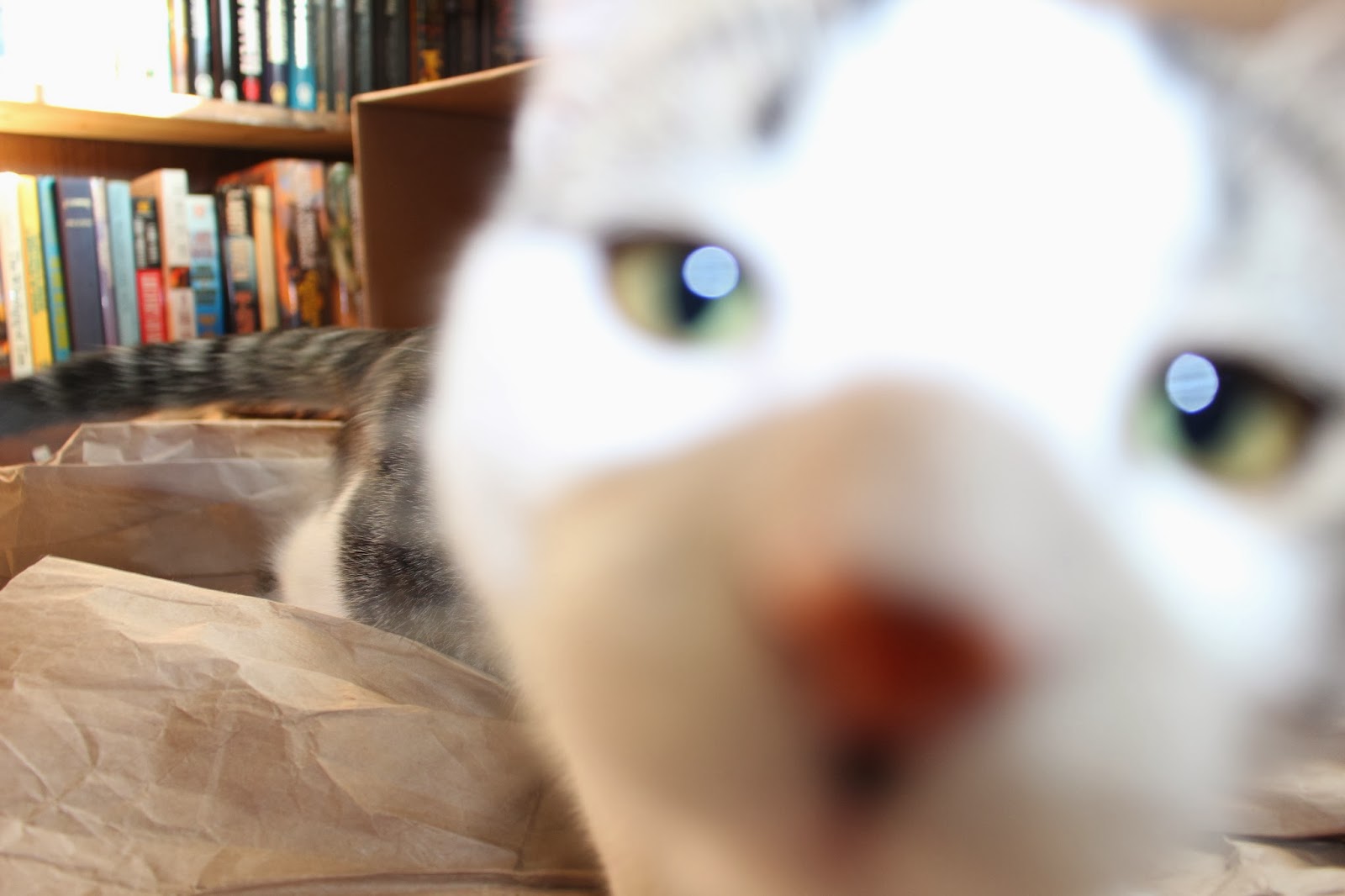 I never for once regret...okay...maybe once or twice regret bringing the Tench-meister home, but for the most part I love him.  He IS a bit ornery though, and he can get a bit grouchy.  He's also FAT.  He's managed to get himself up to about 14 pounds of cat now, double the size of our smallest Olivia.  Olivia, for her part, is a jumper so she can get away from him and he's got multiple wounds to prove that she's gotten him from time to time.  But for some reason he likes Mina the most.  He loves to bug her.  Mina is about a pound heavier than Olivia and she's sweet and gentle.  Unless Tenchi gets up in her face and then she growls like nobody's business.  They tear each other up, black fur and white fur everywhere. 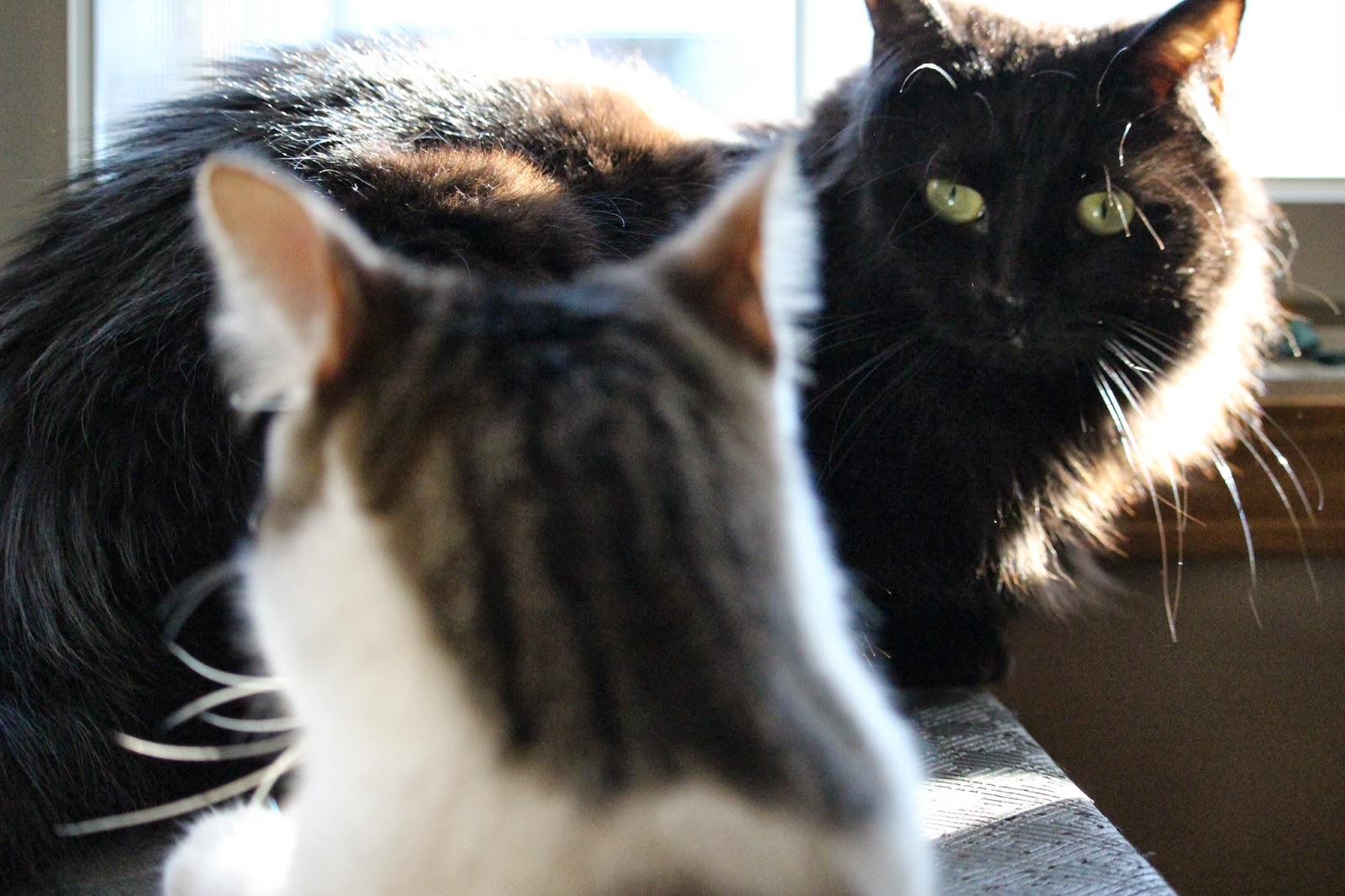 But...they live in peace most of the time.  I can't deny that when Tenchi isn't eating (which he does every time he gets bored and there's no one to play with) and when he's not tearing around the house trying to attack the girls, he does get sweet.  He'll bump into my face like a bowling ball though (I swear I've bruised my nose sometimes when he bumps it hard enough) and he's gotten to the point that if he wants to be petted, he'll grab your hand with a paw so he can push his face into it.  However, he seems to only like to be petted on the sides of his face.  Occasionally a stroke down the back or a scratch on the rump.  He'll bite when I try to pet his belly so I have to keep his claws trimmed back.  Luckily it's never a super hard bite, and only once he broke the skin. 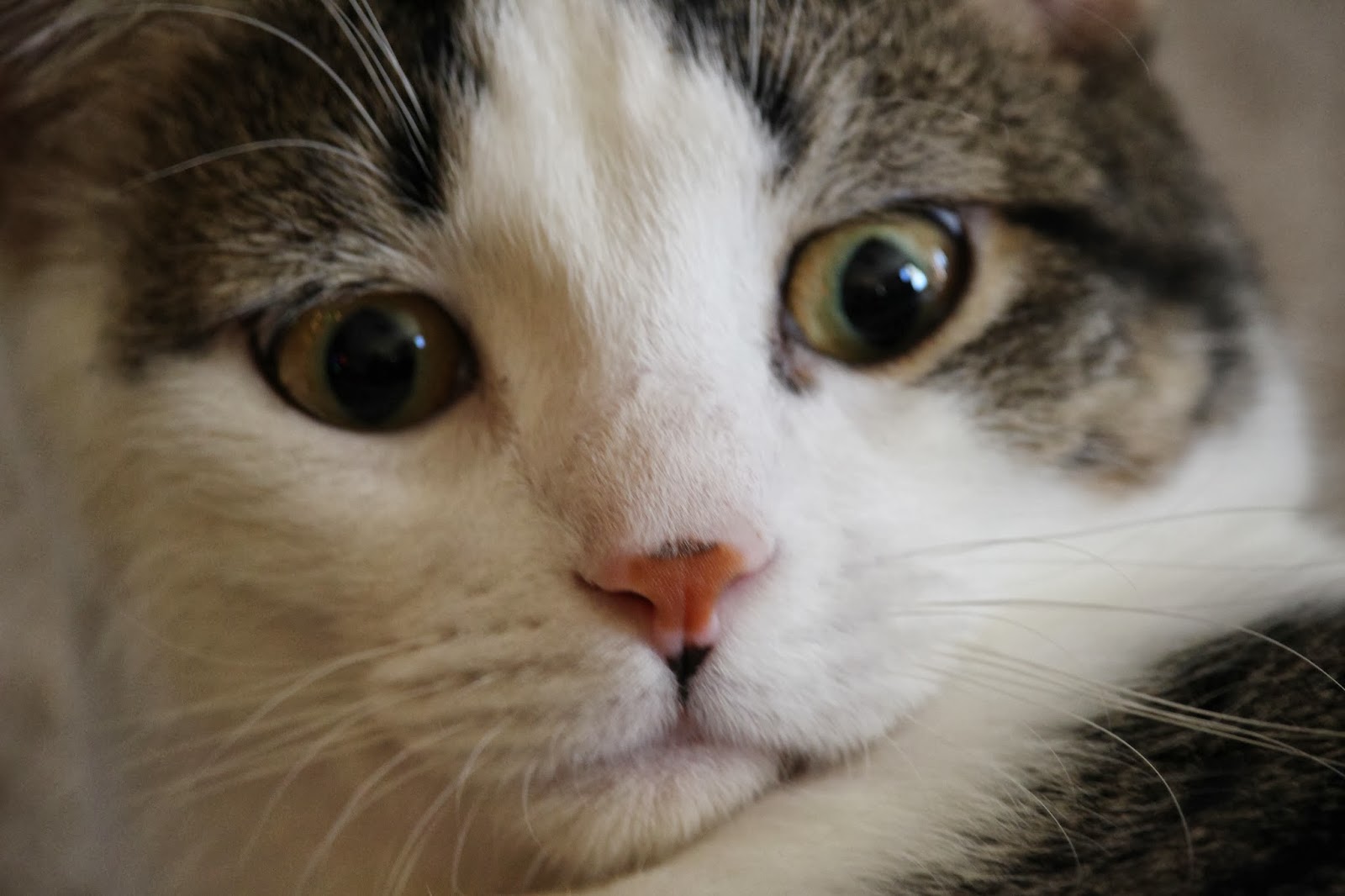 Unfortunately, even with Tenchi being a sweet cat, I've had my moments with him.  If you have ever watched "My Cat From Hell" with Jackson Galaxy, you'll know that cats can snap from being treated wrong.  I know that from time to time Tenchi gets this expression on his face and it feels like he's just not there.  It's almost as if a demon has taken over my cat and if I do the wrong thing or act the wrong way he'll just snap and I'll have to make a phone call to the Cat Daddy myself. 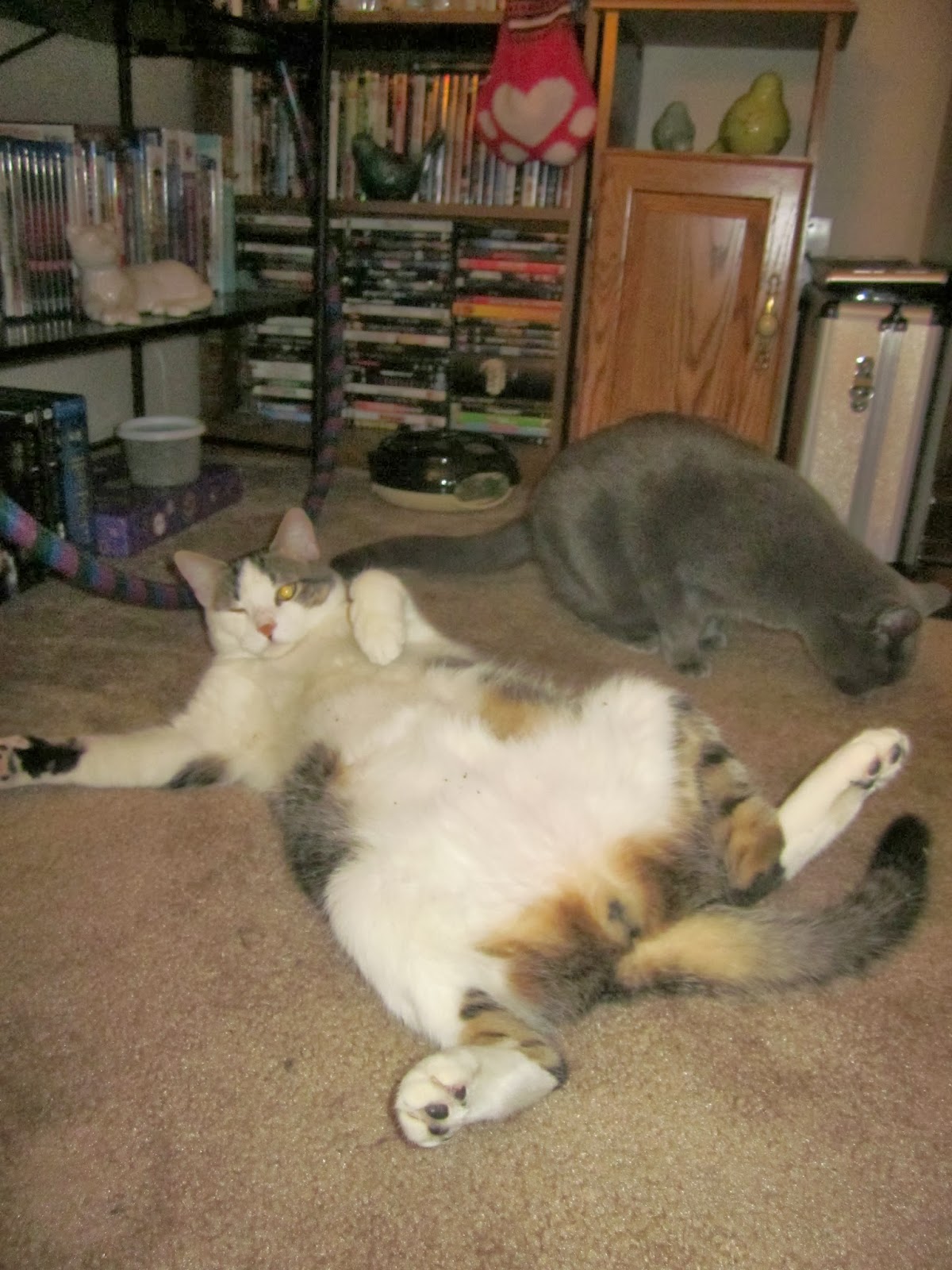 So far, it hasn't happened.  Thank goodness.  But he goes through these moods where I swear he's had enough.  I'm not even quite sure what tips it off, although I do know that he's a MEAN drunk - or should I say when he's got catnip he's really mean.  He goes for blood when he's on the stuff, and even though my other two cats are perfectly sweet and adorable and it puts them to sleep...he just wants to tear into everything.  So I have to be very careful about the 'nip.

Tenchi is hit-or-miss when it comes to strangers.  Sometimes he'll be all over them, curious and playful, but for some reason larger men really scare him.  He acts like he's never seen another human before besides my husband and myself.  He'll run and hide from our best man David and he was scared to death of the cable guy last week.  Sometimes he'll get a wild, fluff tail pose on him and scurry away like we're complete strangers too, which is that part of him I wonder if his brain has flicked over to a different cat setting.

The last thing I'll talk about is how our cat thinks he's a dog.  In fact, I compare his actions (even the crazy wild-eyed cat thing) to things I've seen dogs do.  He'll be sweet one moment, wanting to get petted, then bat his paw at me when he's had enough.  I've seen him just randomly lash out at the girls because he wants to play.  And he has favorite toys that he loves to play with.  I don't have pictures of these things, unfortunately, although I do have video I've thought of posting on my YouTube channel (which might get linked someday if I can get things together) but he has a blue, rubber bracelet and a blue chair cushion tie (that he chewed off the cushion and I never bothered to sew back on) that he drags around the house if he wants to play fetch.  He'll also play with these items on his own if he's really desperate, but most of time they wind up next to the couch where I'm sitting or on the bed when I'm sleeping, only so I can throw them across the room and he can fetch them back three or four times.  He does get bored of this, but he has been known to do it for a half hour or more if he's in the mood.

So there you have it.  Tenchi in a nutshell (or at least in ten or so paragraphs).  I think that covers all but the fact that he likes to sleep at my husband's feet at night, he LOVES fresh water out of the tap (we have a separate bowl in the bathroom just for him even though we have a perfectly good fountain) and that he hates to be picked up, held or have his claws trimmed.  Also isn't much of a height cat due to his fat, although he did just make it up on the counter the other day, much to our dismay.

Next entry will be on Mina - Tenchi's arch-rival and best friend.

Posted by Milly Thompson at 4:59 PM