Today is going to be a bit of a mix since I have been sick for the past week since I wrote that last update.  Exactly one Monday ago I decided that I was going to go full-throttle with my crafting table and finally get going on making as much stock as I could.  I think I laid out the pricing plan and all of that last week (yeah, I'm quite boring sometimes, but what can you expect from someone who spends far too much time lost in her own thoughts?) but after Monday was finished I thought I'd continue on in the same routine for the next week.  Surely a 36-40 hour work week of painting will get me pretty far, right?
Tuesday hit and I painted a bit, but also started to feel allergies encroaching so I switched over to plotting my D&D game that I had going on that night.  If I hadn't been so excited to get through another level with my group I might have just cancelled it when one of the others came down with a cold themselves and didn't make it.  But, we plowed through, everyone survived, and I got to do a ton of damage to them but they made it, and they're stronger for it.  Honestly, I'm a pretty big push-over when it comes to being a DM, I don't really want to kill anyone.
Then Wednesday and suddenly I'm not feeling so hot and this is the second time I've felt this way in a month, and that's not really a good thing.  So I did what I could and prepared for my In-Laws to make it that weekend but I pushed myself a wee bit too far because by Thursday I was really feeling rough and didn't make it off the couch most of the day.  Good thing the house remains in pretty good shape for the most part since I have guests over on a weekly basis (then again, they're also part of the mess I have to clean up, but I digress.)
When you're sick you realize that you really have a lot of time to think on your hands.  I realized that I probably needed to update my resume and started to wonder whether I should really have applied for unemployment since I wasn't aware that the job that fired you had to pay for it.  Well, I sort of did since I'd fought a gal years ago over her saying she quit and her claiming she was fired and ultimately I have no idea what came of that... so I should have known in her case it would have been better to have been fired then quit because of...unemployment.  Oh, yeah.
Didn't happen until today, and of course it might be too late now, and I'm completely aware that I could get my submission back saying "denied" and I'll just carry on the way I have been for the past month, but at least I tried because if nothing else, maybe I can help contribute to the family for awhile again instead of sucking off of my savings as I'm currently doing.
And I remain sick still, but I did finally update my resume and started finally getting back to what I had hoped to be doing a whole week ago, which was to continue on my path to finally getting my craft table going again.  I have a few more ornaments done, more of my displays well on their first or second stages to being finished, and I finally came up with a business name (of sorts).  So far I don't have any official business since I haven't created anything besides a name and it'll be a few months before I start selling anything to make this an actual 'business'.  But I have an email address and I have a site and a graphic header - which is something I've been training to do for years now but really haven't done much for myself for a long time. 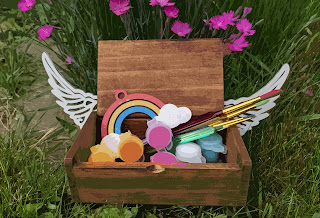 The design was taken from this photo that I took in the garden today.  I think this is actually already the filtered version since I sort of threw it all in a box and then later added text and made it work for the site.  But I was pretty happy with it overall.  What do you even call your craft table when it has to do with painting really random things?  Came up with "Paintbox" after thinking about the box of paints and brushes I haul around the house with me when I craft.  Then add some wings because everything I do has wings (usually) and then since I couldn't say "Winged Paintbox" since that was a mouthful - "Flying Paintbox" was sorta cute but the name was taken online already so it became the "Magic Flying Paintbox" and the name stuck (since I could get an email address for it) and eventually I'll update this graphic to have unicorns and more glitter and probably paint splatter the thing for the heck of it and it'll really be fun and "me".
I'll still need to make up some signage and get that ordered soon, so I really need to get to work, but for now something this simple shouldn't be too much effort and if it doesn't all pan out then maybe I'll just eventually give all of this work away as gifts, but it's practice and that's always good too.  I've always enjoyed painting and now I'm putting it to use and so far the hours I've spent on these projects have been pretty worth it and my mind is starting to open up to new techniques.  And then maybe I can translate some of the stuff I've learned from miniature painting into this and vice versa. 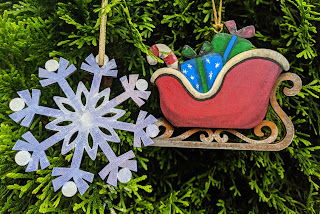 Mind you for now I've been sticking with Christmas ornaments since I have a load of stock of those, and eventually I'll branch out into some larger craft items, but it takes time and effort to figure out what kinds of things you need to make and what kind of techniques go the fastest.  Snowflakes, for example, paint up extremely quick and I'll probably do an assembly line for a handful or more of them later on.  I've also considered (and will probably do so) personalization of the ornaments at the craft fair in order to add a couple bucks on to each but I really need to get to the next step of practicing lettering again by the end of July.
My mental health was a bit better in general today, and I think that's because I also talked to some of my old co-workers again and reached out to make some much needed reconnections.  That's the hardest thing from going from a 40 hr. job where you see the same people nearly every day to suddenly being completely unable to see them again.  I might be an introvert for the most part, but I still need some people in my life once in awhile otherwise I get lonely and more depressed.  And strangely enough, the people that used to wear me out talking to an hour or more (my mom and a few other extroverts I pretty much had stopped talking to) don't nearly wear me out to the point of exhaustion anymore.  So now I'm starting to reach out to them because I'm not already so worn down that I can't stand life anymore.
So how does this all help with my mental health and well being?  Confidence is a part of it.  Feeling like people actually do want to talk to me and miss me is a huge boost.  Having a few friends go, "I believe you can do this!" is a game changer.  And of course, my husband is still there for me, and all of my family, and I can't for one second deny how awesome that is, but it's nice to find people who are out there who still know and care that I exist and want to create a lasting friendship with on my terms and not out of any obligation. 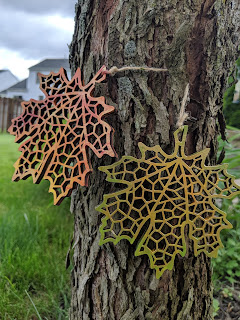 Now though, I have two really huge life events coming up, one in three days from now...hooooly...three days, what??  My 10th wedding anniversary.  And then in another week or so after that my 40th birthday.  I thought those would be the only life changes I'd have to go through - learning to be older and wiser and hopefully learn something from the act of getting through another year.  But now I'm learning more about myself then I thought I would have - learning what I want out of life and trying to see where this crazy world is taking me.
So, if you don't hear from me for the next week or so, that's probably because of these two important things coming up.
And hopefully I'll get over these blasted colds once in for all!

Posted by Milly Thompson at 9:03 PM