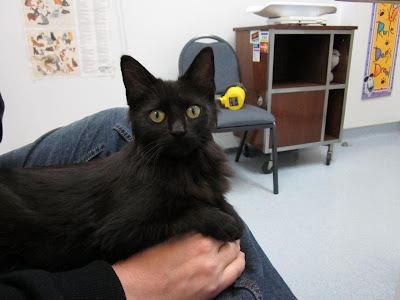 Sometime before Tsubasacon, my husband and I were debating about adopting a second cat so that our little Olivia would have someone to play with.  But we decided because we were so busy that we hardly had time to play with Olivia it would be best to just wait until Tsubasacon was over and done before attempting to find one.  It's kind of like having one child and trying to decide whether to have a second.  Sure, an only child gets spoiled rotten, but they're rather more lonely than a child with siblings, and there's always that possibility that just because we got her a friend Olivia might not be the same afterwards.  Lots to think about.

Well, Tsubasacon is a week past now, and we talked to one another just about the day we got back.  Should we go look for another one?  Should we wait?  And as we were laying down for bed one night I put my two cents in - if we get another cat, it'll have to just show up or fall in our laps.  Let's not go out and actively try to find another cat, because we might pick the wrong cat.

Now, if you don't know me very well, you might not know that I was born and raised as a Baptist and that even though I'm not the best Christian there is, I do believe strongly that God is out there and He watches over each and every one of us.  The more we trust in Him and the more we do things to honor Him, the better our lives will be.  Trust me, with the things I've seen over the years, I really believe in God.  And so I prayed about the whole thing.

That conversation between my husband I took place on Monday night after the convention.  I spent Tuesday at home doing catch up on chores and laundry, and then turned around and went to work on Wednesday.  On Thursday, a co-worker asked if I was still thinking about getting a pal for Olivia.  I kind of shrugged it off, that yes, sort of, we'd been pondering it but only if... "Well, we found a little kitty for you."

She described this little black ball of purring fur had been left out behind her house after being treated unkindly by a little girl.  Apparently she was seen being dragged around by this little girl, sometimes being put into a box and dropped.  Dropped!  Crazy stuff, but my co-worker saved her and had been feeding her over the weekend.  I didn't find out exactly when this happened, but it's a pretty short time frame to be a coincidence, you know?

Anyway, I called up my husband who said, "You're joking, right?  After you just said that the other night?"  I assured him that it was no lie (unlike him, I tend to tell the truth on things, it rarely occurs to me to lie or joke), and that my co-worker was going to bring in a picture the next day.

Yesterday I pretty much had made up my mind that we would take her so we made arrangements to go pick her up this morning.  The kitten was just as friendly as my co-worker had insisted, but definitely not a male like she had first assumed (although it would have been nice since we already have one female) and definitely had a lot longer hair as well.  Which, is okay, we have a cat hair brush already my husband bought on accident for longer haired cats.  We even had enough time to make arrangements with the vet to bring her in and get her checked up.

So as we drove back with the little one in the cat carrier, we discussed names.  By that time we'd pretty much felt the kitty was a she, so we started tossing around female names.  Astrid was out.  Mike thought about it since we'd named Olivia after the Fringe character.  Mike didn't like Nina (after Nina Sharp), so I started to dig into my vast collection of names since I wanted to be the one to name her this time (Mike had pretty much named Olivia.  We'd decided on the name for a different kitten and I think for a time Olivia wasn't Olivia, it was Elizabeth...both of us accidentally called her that, but I do believe she's settled into her name now).  Anyway, I threw out Mina.  The name comes from Getsumen Miina (look it up, it's a kind of random anime that spun off of Densha Otoko) - from the main character.  I like the name, plus it has the "meee" sound, and cats, I'm told, come better to names that sound more like "Meows/Nyao" since it's closer to the 'language' they speak.

After the vet visit where we were assured she was a she and not a he, we brought Mina home to see her new house.  Only a part of it, I'm afraid, she's got ear mites and fleas, and even though we introduced her briefly to Olivia, they'll have to stay mostly separated until Halloween.  Surprisingly it wasn't Olivia who first started hissing.  It was Mina!  I'm very surprised the little one has so much spunk.  Olivia was actually pretty timid.  So I'll be curious to find out which one becomes the fat cat and which one is the more shy, skinnier cat.

For now, however, it's going to be like I'm living two separate lives.  One with the little kitten in her room, and another with Olivia.  Ah, more to do and just after we had stopped having to worry about all of the convention stuff for awhile!
Posted by Milly Thompson at 5:22 PM

Email ThisBlogThis!Share to TwitterShare to FacebookShare to Pinterest
Labels: Cats