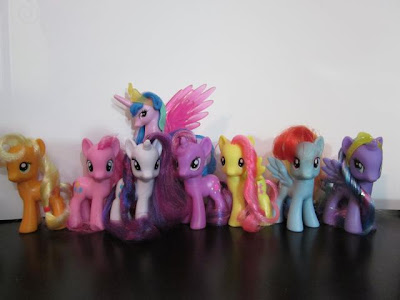 I keep saying that I'm really not an expert on My Little Ponies.  In fact, I'm probably pretty far down on the totem pole when it comes to this series because I got into it kind of late in the game.  Actually, the first season was over and done, and THEN I got Hub and started watching it.  And then I started collecting the ponies as well because, well, they're cheap.  In comparison to how much I used to lay down on manga in one month, these are just a drop in the bucket.  I gave up five books and got this whole set.  Heh.

Anyway, the reason I'm posting this is just because even though I helped host a Brony meetup, I was kind of like the only one who didn't have a life altering experience from watching the show.  I'm too new at it.  I just happen to be older, with a good job and probably too much expendable income...not THAT much mind you, but you'd be surprised at how good of a saver I am.  (I even used coupons on the Celestia/Luna set and made sure I didn't buy one of these at more than $5 a piece, for example).  I felt really out of it during the whole thing, and far too embarrassed with the whole thing ever to watch the video of it, just knowing what I was thinking as I was speaking makes it unbearable.

Surprisingly though, I've met a few other people who are just as new to it as I am, or maybe newer.  That's what's weird about this show, that it's still collecting fans even though it's in the second season.  People are realizing that it's a pretty cool thing.  And they're buying the toys and styling the hair.  I got an message tonight asking about tips for making them 'show accurate' which is something I myself have been fiddling with this last week.  Take Fluttershy for instance: 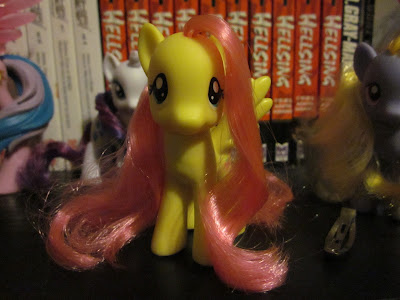 I can't bear yet to trim her hair to the correct length of the show, but I did flatten it out quite a bit to get it to lay better.  She's so adorable.  I'd love for Fluttershy to be my favorite pony, but it's really Twilight Sparkle.  I'm most like her - in fact, when taking a "which pony are you like?" quiz I turned out to be Twilight Sparkle.  And why?  I have organization and leadership qualities.  If you've seen Winter Wrap Up, then you'll know a little of how I worked my magic to sit 300+ people at Tsubasacon's cosplay.  And really I could have done a lot more with a notepad and a quill!

But the real reason that I'm doing a blog on ponies today is that I started liking MLP since I was a little girl.  And when I say little, I mean LITTLE - 5 years old or maybe younger.  I have quite a few of the original mail order ponies and quite a few first generation ponies.  I later got a second generation (it's soooo ugly) and apparently I found one third generation and bought a second one about the time I moved in with my future husband.  I just remember a time when there weren't ponies, and also a time when they were everywhere.  I have dreams about finding that elusive pony in some shop that no one knows about.  MANY dreams of just that, you have no idea.  When ponies weren't being released there for a time I scoured flea markets and second hand shops so I could 'save' them.  My collection isn't huge, it's far from ever being complete, but it makes me happy.

What didn't make me happy, however, is finding out during the Brony meetup that there was a third generation and a "3.5" or what they call "Core 7" that I didn't have even one example of in my collection.  It was merely a fluke that I stumbled into a Rite Aid pharmacy on the Thursday before Tsubasacon and I found, of all things, a Gen3 Rainbow Dash.  I could NOT believe my eyes!  I picked it up and bought it. It had probably been in that store since 2007 like the copyright stated.  But alas, those ugly 3.5 ponies with the giant heads still alluded me.

It was last Friday I ran into my CVS just to pick up a prescription and in the back of my head I thought, 'You should just check the toy aisle,' and of course I'd already struck out at other pharmacies I'd been looking at in the area just because those are the hidden gems recently... and there was Pinkie Pie, Scootaloo and Rainbow Dash, all in their big-headed glory. 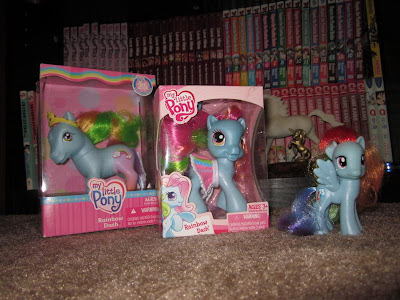 Mind you, I only bought Rainbow Dash, as both Pinkie Pie and Scootaloo actually had their names printed as part of their cutie marks and that was LAME.  But Rainbow Dash was cute even though it boggles my mind that Rainbow Dash went from being the stylish girly prissy one of the ponies to the boyish one of the group!  Of course she got wings and her cutie mark changed slightly, but the body color and hair remained pretty much the same (with the exception of making them all rainbow colors versus pastels).  I'm glad they made the change of course, but it's amazing to think that this particular character pretty much turned into Rarity (who has a very familiar looking shop if you look at the old pics of that cartoon) and now has a 20% cooler attitude (actually, make that 120%)  ^_^

So, that's what I wanted to share.  That I found all of these Rainbow Dashs by almost accident but isn't it cool ?  I think so anyway.... now off to style her hair!
Posted by Milly Thompson at 9:53 PM