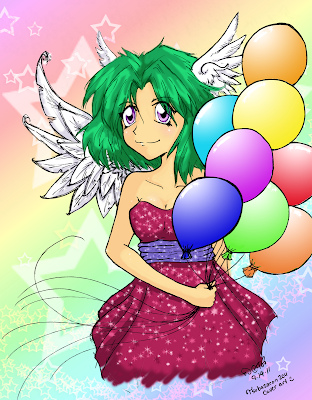 To those of you who have never heard of an anime convention, let me sum it up as briefly as I can.  Anime is "Japanese animation", and it's a bit different than American cartoons because it's prettier, for one thing, usually has a well-rounded story-line, is usually made for adults, though there are many made for children as well, and except for a few of the better known series, usually consist of about 12-26 episodes.  If you've heard of Pokemon, Sailormoon, Naruto, One Piece or Bleach, you've heard of an anime.  An anime convention, therefore, is for fans of this genre.  They can come together to meet for a day or a weekend, buy things that have something to do with anime or Japan, watch anime, talk about it, and also play games and dress up like their favorite characters.  Anime conventions are a lot like Star Trek conventions, but they tend to cover a whole lot more than one or two series, and each year people will concentrate on a new series rather than the same one year after year.
Okay, at least I tried to make that short!  I'm sure many of you who are reading this, knowing who I am, also know about anime and all things goofy and childish.  Okay, maybe not.  Maybe you just know that I'm pretty goofy and childish when I'm not being all managerial at work.  During this time of year, especially, I'm working on all different parts of an anime convention that my husband runs.  Not two months after he was given the reins of Tsubasacon, he met me at Ohayocon (Columbus, OH) and before I knew it I was going to all sorts of conventions with him, giving him ideas of what conventions were like and how things ran and what to concentrate on to make it 'just right'.
A short history of Tsubasacon - started, I believe in 2004 by someone else, it started to a tiny little crowd, didn't even have an artist alley (although the one artist who randomly showed up made a killing I'm told) and the next year the con-chair basically screwed up big time, they got kicked out of the Charleston, WV civic center and the name was given to my husband to dig out of the ashes.  He even had to salvage website rights and I'm told had to put a lot of bandages on different things in order to get it to run again.  Plus he had to borrow money from his parents and grandparents to even start the thing.  He went on and began again in 2006, this time in Huntington, WV, with a handful of friends who basically knew very little about anime or conventions.
Shortly after his first successful convention that I was unable to attend since they had it the weekend after Thanksgiving (and if you know how retail works, no one gets those days off!), we moved in together the very next year and I've been helping ever since.  It's only been getting bigger and bigger ever since.
I'm not saying I had anything directly to do with that, but I will say that I've been that little shadow in behind everyone since 2006 when I was suggesting ideas to the guy who ran main events (who introduced me to my future husband) some of the stuff that we still run today.
"So," you might be wondering, "What does any of this have to do with the picture at the top of your blog and with your title 'Hidden Messages'?"
Namely this - since 2007 I've been doing the programs for our convention.  It's pretty cool.  I like having control over this publication once a year, and even though it is a huge pain in the butt... I still get some satisfaction with saying "I did this."  This year the cover art was mine, since I had such a hard time getting people to give me artwork to do the cover.  AND...maybe just a bit because I've been putting my own artwork on the cover for a few years now and it's kind of a special thing for me.
The character you see above is named "Mitsuki."  She got her name...two years ago I believe, probably 2008.  She first appeared on the 2006 cover, drawn by Tiffany Grant (different last name now, maybe, she just got married).  I think her very first sketch was very rough, but shortly thereafter appeared a logo that we only later discovered had an uncanny resemblance to a Japanese drawing.  That character appeared on both 2006 and 2007, then by 2008 I put my own artwork on the cover.  Only 2010 had Jen Lee Quick's artwork.  "My" Mitsuki has purple eyes rather than the original Mitsuki which was more maroon.  If you ever search up information about the character or you ever look at various drawings of her, you can see the difference.
Again you ask "so what about the title?"
This year, our game show host Greggo announced that there will be hints of My Little Pony: Friendship is Magic in his game shows.  Apparently, we found out just about a month ago, he's a Brony.  For those of you who don't know what that is, it's basically what male fans of the series call themselves.  I didn't know what the whole hoopla was about, quite frankly - I'd seen little clips of MLP:FIM and thought it really silly (that was when you could watch it any time you wanted on YouTube, but they've since locked much of it down) and suddenly my husband said, "I think one of my co-workers is a Brony."
I blame my husband, and also Time Warner cable for giving us the Hub - because of those two things I have the entire cast of My Little Pony on my desk at present. 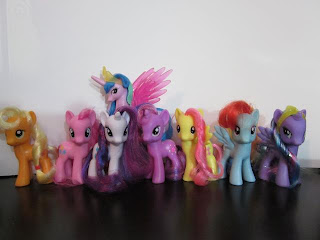 Finally I've come to the reason for this huge blog today.  Number one - the theme of this year's Tsubasacon is balloons.... if you've seen any of this My Little Pony series you'll know the bounciest, funniest, off-the-wallest pony is named Pinkie Pie, and her 'cutie mark' (the mark on her flank) are balloons.  Pinkie Pie is my husband's favorite pony (if he has one, he's not a real fan of the series, but has been forced to watch a few with me.)  There is also another pony named Rainbow Dash - and if you notice behind Mitsuki at the top, the rainbow behind her is in honor of her.  The stars in the background are for Twilight Sparkle (also Mitsuki's dress which is purple and pink).  Two orange balloons are in honor of AppleJack.  The glittery dress is in for Rarity and her glittering outfits.  And the gentle sweeping wings are for Fluttershy.

Also hidden within the pages of the program is the "Mitsuki Pony" I posted last month.

So...if you've a pony fan, or a Brony - we're also having a Brony meetup on Saturday at the convention.  And there will be buttons with the Mitsuki pony on them.

Now you know what the "Hidden Messages" title means.

And now you're either that little bit smarter for it...or you think I'm really insane.  And that's okay, I like it that way.
Posted by Milly Thompson at 6:10 PM