I'm glad that my husband and I got to go to Anime Central.  I say this because at this convention there are so many people there that we aren't the oldest in the bunch.  In fact, there's some who are quite a bit older and have been attending quite a bit longer than we'll ever hope to dream about.  However, on the flip side, it made me remember old times when I used to have quite a few more friends and acquaintances to meet up with.

It's weird, if you think about the scenario, because back in 2003, which I think was the first year I went to Anime Central, I had quite a few friends to meet up with.  I didn't have many internet friends, I didn't have MySpace or Facebook at the time, so there was no asking a friend on their wall and asking 'you going to the convention'?  You either saw them there, or you didn't, or maybe you dropped them an email if you had one, or you talked to them either in person or on the phone.

I used to hang out with friends at conventions, I used to have three-day weekend crushes on guys there, I used to flirt with other cosplayers, I used to get glomped, stopped, hugged, photographed and over-all just had a good time and met new people.

This year, with Facebook, I thought, 'oh, there shouldn't be a problem with me finding some of my old buddies.'  So I messaged them.  Nothing.  Completely ignored.  I can see my posting on their wall and see absolutely NO responses from them.  Thanks for all the fish....NOT.

Well, I was still hopeful, so I went in search of all of those friends, took time out of my schedule to search panels, vendors, alleys and wherever else I thought I might find some of my old hook ups.  Some I found, and I did find the majority of them, were polite and talked to me briefly, but I knew they were thinking about something else, not talking to an old friend they hadn't seen in awhile.  Others gave me the complete brush off.  Talk about disappointing!

This time around I didn't make any new contacts.  I was just too bummed by the ones who had gone on with their lives.  I understand that life happens, but this was the weekend of seeing old friends, making new ones and in general talking to people who have similar interests as yourself.

And basically, I'm too afraid any more to make new friends.  Which of course, leaves me in the awkward position of complaining about not having friends, but also unwilling to make new friends who will in turn lead me down this grump about feeling abandoned and betrayed. 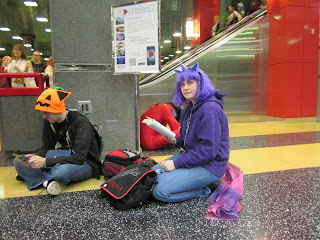 All of this begs the question, why do I like My Little Pony: Friendship is Magic so much if I am having such a hard time finding friends?  I like Twilight Sparkle.  I'm basically her, growing up over the years, having one friend (not my BBBF - big brother best friend, but my LBBF - little brother best friend) with a few others here and there, but suddenly I've found myself with only a small handful of friends and too busy, and quite frankly, more than a little scared, to make new ones.  And I don't have a Pinkie Pie, or Apple Jack, or any of those others who pop over and say, "hey, want to be my friend?"

I did have that from time to time... a few friends helped me out along the way, and as I think back, I'm not sure I've ever made a friend all by myself....  Which, is really kind of pathetic.

Ah well, enough, I'm just writing this for myself anyway.  I just wanted to get it down while I was in the mood and felt like writing something. 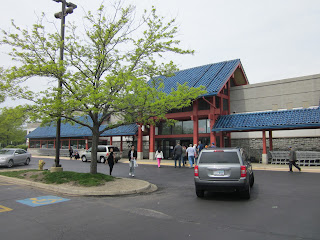 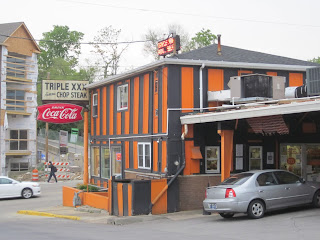 On a COMPLETELY DIFFERENT NOTE...

We ate some really, truly, righteous food this weekend.  Sweet Baby Rays BBQ on Thursday night.  On Friday some really strange vegetarian sandwich I'm actually thinking of eating more veggie stuff from now on (but then also had an AWESOME BLT that day too).  Then on Saturday we had Giodorno's (sp) stuffed pizza which is like a Chicago deep dish only with TWO crusts.  Then on Sunday we had the best Ramen I've ever had at this Japanese market...the best bread there too...oh my gosh do they make anpan there like pros, it's like being in Japan without ever setting foot there.  And then Triple XXX Family Diner: rootbeer and burgers in the very first drive-in in Indiana near Purdue University (my first DDD Guy Fieri restaurant).

Ah...food.  Never lets you down, always fills you up!