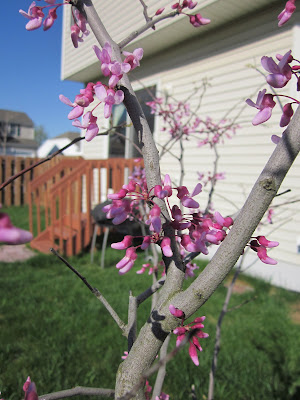 Ever since I received my very first camera, I have found myself drawn to taking photos of flowers.  Of course, back in the day with my little Polaroid in hand, I didn't really have clear photos of them, nor did they look very photogenic when the picture developed after minutes of redundant shaking of said Polaroids.

I was in my early teens when I started a garden of my own in the old sandbox that neither my brother nor I used any more.  My mom allowed me to start my own pansies in a starter set and I watched those little seedlings take sprout and watched all summer as eventually they blossomed and I was able to see all of those beautiful little faces 'look' up at me.  I was hooked on pansies after that and also forget-me-nots because I grew those too...although they didn't bloom nearly as prolific, and they were too small to take good photos of at the time.

At my mom's house there still exists a scrapbook of the first photos of that garden and even a few pressed flowers from that first crop of pansies.  Ever since I've either grown pansies or planted them (they're a lot easier to buy pre-grown of course, though more expensive) and I've had a penchant for taking pictures throughout the season.  Pansies are an unusual flower as they tend to only thrive during the early spring and late fall.  I kept my fall planting through January and probably would have managed to keep more than the handful I still have alive had the aphids not killed them after I brought the pots indoors.  (Apparently bugs are dormant in the winter and they woke right up and started munching once they got inside.  I blame myself, those pansies were doing good in the very mild winter we were having except for a few frosts that provoked me to bring them inside again.)

Later in life I found myself drawn to all sorts of flowers, including the beautiful Redbud tree which my mom agreed to buy after she cut down the apple tree that was in her backyard when she refused to rake apples anymore and decided that my brother and I wouldn't either.  She resorted to cutting it down the moment someone knocked at her door asking if she had any trees she wanted taken care of, even though it had been the center of my childhood summers, climbing, adventuring, swinging beneath on the swing set... well, you get the idea.

The photo above is actually my second Redbud, this one I planted the first week we moved into our new house (you can see our rickety back porch in the photo).  At the time this photo was taken, it was just about to bloom early again (last year it had bloomed early when I bought it, nearly three weeks before other planted ones) but this year because of the ridiculously warm winter. 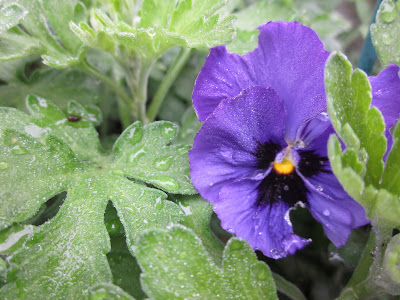 The pansy you see to the right here is actually one of the winter survivors.  I'm very proud of my pansies, you see.  I strive to keep them alive as long as possible throughout the year and many summers I can keep them alive until they start a second growth in the fall.  This fellow might actually have been part of the previous spring planting, but I can't be sure because it was buried by the chrysanthemum I brought from my apartment when I moved.  (Those are the leaves you see around the pansy.)  I may have planted them both nearly around the same time and because of the protection of the leaves the pansy may have survived both summer and winter, but I know for certain it survived winter and decided to bloom again this spring.  The flower was quite small, only the size of a quarter.

I've been fascinated by pansies and violas since a kid as I've mentioned.  Back then you didn't really smell pansies at all, they had a very light (if any) fragrance.  Since then they've created breeds with much bigger flowers and a much stronger smell to them.  I remember the first time I ever smelled a pansy and thought that was the prettiest smelling flower I'd ever smelled (outside of lilacs and hyacinths.)  My interest in these flowers also came from a childhood friend of mine who managed to keep a viola alive for a good year or so and it was blooming in the winter after she thought it had died.  It's amazing how strong these little flowers are.  I think I read somewhere that they stand for 'remembrance' but I can't be entirely sure. 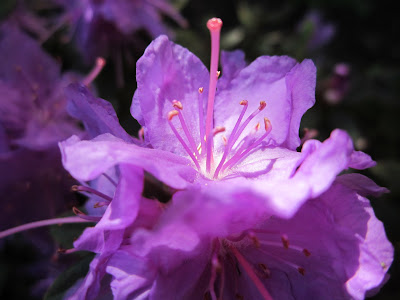 Most recently I've been growing azaleas.  When I lived in Michigan they weren't nearly as prevalent at garden centers as they are today or as they are in Ohio.  I think the weather is a bit milder and they're a bit happier.  This particular fellow is super pretty with a very beautiful purple flower - the color is pretty accurate in this photo - with dark green leaves.  The bush has gotten a bit bigger than when I planted it, so I'm pretty happy with the result.

I have two other azaleas in the yard, one is more of a pink color, the other was supposed to be white, but the rabbits got hungry this winter and ate all the leaves.  It's still hanging in there, if barely, and I've considered potting it again until it gets big enough to survive scary bunnies.

Well, that's all the time I have for now.  I hope you enjoy my little flower photo gallery.  I'm thinking of posting more of them on my DeviantART account if you'd like to see them.  Haven't yet but might.  I do enjoy taking pictures so if you like them too, leave me a comment!
Posted by Milly Thompson at 11:17 PM