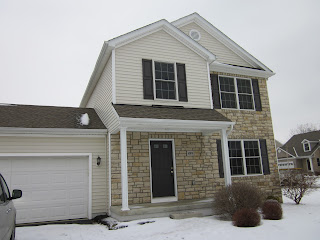 So, here is my house.  It's one of those cookie-cutter houses that you see just about everywhere nowadays because the companies that build them have a handful of designs to choose from, and even though there are subtle differences between them, overall they just look the same.  I was attracted to our house...why?  I can't even quite remember why because when we were first looking at the place it was pretty pathetic, as you can see from the photo.  Besides a few online photos, this is what I saw the very first day we were looking at houses.  Bare bones, pretty ugly.

But even when I lived in an apartment, thankfully we had a ground-floor patio and there was just a tiny patch of land to plant stuff.  I was pretty happy with it really, because I could put a few veggies out there, a couple flowers, and it was my garden.

So, you can be rest-assured that when we moved into our new house I was pretty stoked about having a huge yard to do stuff in.  The first plants that went in were a few bulbs from the apartment that I had pulled up, as well as a six-pack of mums that I had bought just that previous fall.  All of the geraniums that I keep indoors during the winter, they all were packed up and came with me as well.  Then, I did all of the inside stuff for a good month until I was pleased and we had moved in and it warmed up enough to actually start the process of getting the outside looking at good as the inside. 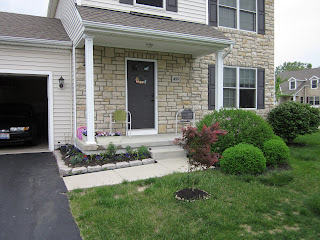 First step, getting some stones in order to raise up the garden around the porch. There was one plant left in that poor little garden, which I later found out was a dianthus when it finally started blooming after a lot of water and Miracle Grow.  The only other plants left in the yard were a large lilac bush (of the miniature variety), three spirea, two peonies (which magically popped up in a bare patch to the side of the house) and one huge viburnum which has become something of a bane to me because it never stops growing and I have to constantly trim it during the summer.  But during the spring it has the prettiest smelling flowers.  (Oh, and some golden evergreen-shrubs that you can't see very well, they're just a hint of color).

Later that summer I added the stones to the garden, a second level closer to the fall, the mums love that front garden.  Planted a few other bushes, pansies and later petunias.  Put in a red Japanese maple, and the house started to look a wee bit better than it's winter counterpart (but of course they always do).  However, we're still having grass problems as you can see in the picture above, and in subsequent pictures too. 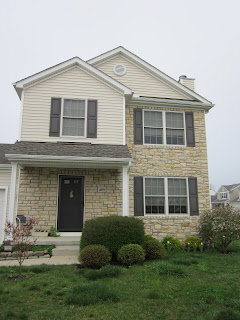 Fast forward to this spring.  As I mentioned about the grass...we've got a lot of bad patches still (enough that a Scott's guy knocked one day after walking by and gave us some info...heh heh...urg).  Anyway, in the fall I trimmed out the lilac up front for a more square shape, added that second row of stones up front as I mentioned, and planted tulip and daffodil bulbs.  The tulips can be seen in the right garden.  They turned out to be a really pretty mix of fancy bulbs, some multiple rowed, some variegated, some frilly, and all either purple, white or maroon.

I digress.  So, at the time when I planted the Japanese maple I'd been thinking about continuing the garden out around the front of the sidewalk leading up to the front porch.  After a couple of co-workers first brought me a bunch of plants, and then another loaning me a tiller to work on my garden out back, I thought it was time to finally start work on a little more landscaping. 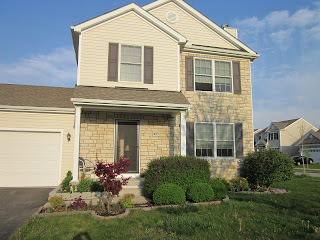 The result after about 5 hours of tilling, weeding, digging, planting, stone-laying, etc... is what you see here.  I came home after an eight-hour shift at work and started going at it before dinner, took a dinner break, ran to Home Depot to buy some edging stones (at the awesome price of like 36 cents a piece) and finished up at dusk.

The idea was to have a pretty cohesive garden that wraps around the front of the house.  The new plants that went in this year were two yellow/red spirea (which are supposed to bloom red, so I'm looking forward to seeing bloom alongside the larger pink spirea).  A couple of corabells that my friend gave me, and a dozen snapdragons of various colors because I've been in the mood for snapdragons this year for some reason. 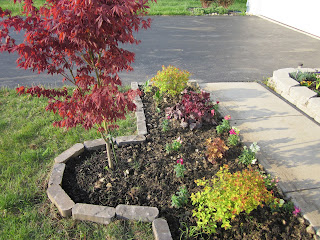 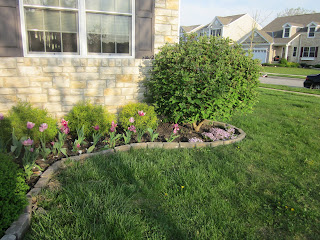 Here's a bit of a closeup of the garden itself.  I still have to mulch it, which probably won't happen for a few more days since it's threatening to rain now (although I took these photos first thing this morning it's gotten pretty windy and dark out as I write this blog).  I think the reds from the tree, the tips of the spirea and the corabells give a nice accent to the otherwise green flowerbeds.

Eventually I'll probably straighten out the line of the flowerbed so it doesn't do the funny little curve out around the tree, but since I have a bunch of curves around the yard like this already it softens up the very squared off appearance of the house itself.

As you follow the curve around the spirea and lilac, you can see the golden evergreen bushes, the tulips, and the viburnum.  (You can't see it but to the left there's a purple azalea hiding by the porch) and a recent addition is also the purple creeping phlox that I was given by a friend (and added to a bit with the help of a gift card from Home Depot).

It all needs to still be mulched, mowed, trimmed, etc.  But I think the overall appearance is appealing.  And what I think is the coolest thing is it cost less than a $100 for the majority of it all.  Can't ask a landscaper to do it that inexpensively!

Ah...I guess I need to wrap this up and close up everything...the storm is rolling in faster than anticipated.  Please look forward to seeing more photos of the garden as it progresses and fills out this summer!
Posted by Milly Thompson at 10:08 AM