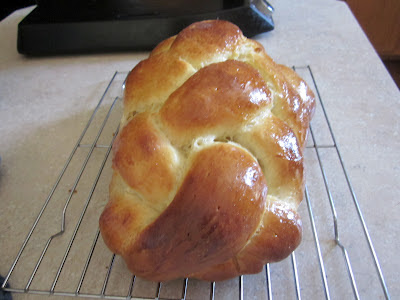 This is what came of my first attempt at challah bread.

A few months back I heard about the Jewish bread while watching Unwrapped and thought, "that stuff looks pretty tasty" and I came to find it pre-made at one of the local bakeries in my favorite grocery store.  It was soooo yummy!  I think you could easily compare the taste to Hawaiin sweet bread since it had that really light, fluffy consistency, you could just pull chunks off of it and eat it without any butter or anything (although cinnamon butter tasted pretty good too).

A month or so later I found a magazine that had the recipe for it.  It's the Fine Living Breads issue, and after a bunch of hoopla to get my hands on it (a coworker offered to buy it for me as she bought hers with a coupon and it took an extra week to get payment and my magazine in my hands) and another week or so before I tried a recipe out of it.  The delay was caused mostly by the chocolate issue that followed after it and I tried two recipes out of that one as well as Alton Brown's homemade gourmet ice cream (which, by the way, the chocolate is every bit as good as anything you've ever tasted...unless you've had Jeni's and then maybe it's a bit weak on the chocolate side, but her ice cream is crazy rich).

Anyway, after dithering over the bread making thing my mother-in-law took me into the kitchen the last time I visited and taught me how to make cinnamon rolls using the Kitchen Aid mixer.  Thank goodness because even though I had made a recipe of bread with it since I got it for Christmas, I hadn't tried anything that turned out to taste really good.  Those cinnamon rolls however, were pretty darn tasty.  Good enough in fact, that a week or so later I made a large batch of dinner rolls which we're still eating on out of the freezer.

So, with cinnamon rolls, bread rolls, and a kind-of-okay loaf bread out of the way I thought "It's time to try something a bit more difficult".  And with Easter Sunday off, it was the perfect time to try this Jewish treat.

But... the house was too cold, and I forgot to rise the dough in a warmed oven, so it rose too slowly.  Then I warmed up the oven too much and ended up killing some of the yeast (I'm pretty sure).  But the dough stretched good and it braided just fine, as you can see from the picture.  It browned a bit fast, but the recipe warned me so I did as told and covered it with foil and then waited to see how pretty it was.

It looked beautiful and the house smelled terrific.  It had to be good, something that looked this good, right?

I over-baked it.  The recipe warned about under-baking so I never once thought that maybe the timer would be too long.  It was also dense, dry, not nearly as sweet as the store-bought loaf and didn't pull apart...nope.  Had to use a knife.

Thought to myself, "Maybe it'll be better the next day." 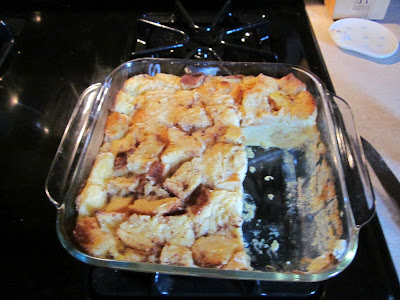 Still dry, maybe more so, even after being placed in a Ziplock bag overnight.

This is the first time I've ever tried to make homemade bread pudding, and usually it tastes better when you make it with cinnamon rolls (the best I've ever had was made from a cinnamon sticky bun that was bought from a restaurant called Gracie's Country Inn up in Michigan - they would have it on their buffet from time to time).  But this turned out to be a close second, but for the fact I must not have beat the eggs and milk completely because there were a few chewy portions of egg. The problem I found, soon afterwards, was that I didn't have a good vanilla sauce recipe.  I wanted something that tasted like those sauces I had as a kid at Gracie's and heck, even like my mom made, but most of the sauces that looked right online had ingredients I didn't have at home.  I ran out of eggs doing this and don't keep whipping cream or whole milk on hand.

The solution?  A mix of different recipes I found online, which basically came down to a cup of 1% milk (which I do have), 2 tablespoons of margarine (again, no real butter) a tablespoon (plus some) of cornstarch, 4 tablespoons of white sugar, another 2-3 of brown sugar, and then stirred and stirred and stirred on low, then let boil and it thickened up and I added a teaspoon of vanilla extract.  Voila!  So yummy!  Oh, and for the record, I was dumping by this point so most of the ingredients are estimates at best....heh, kind of lucky it worked out really.

So..... what have I learned about bread making?

Challah bread should have plenty of time to rise and become really fluffy - and sweeter, I think there should be more honey in it than my recipe called for.  And in the future I'll probably just buy it...  And as for bread pudding...ah heck, it tastes GREAT with enough sauce on it so who can complain?  Oh, some people I'm sure, I don't put in raisins as you may have noticed, but that's a personal choice since I'm not a big fan.

I hope you like my little bread story.
Posted by Milly Thompson at 7:33 PM

Email ThisBlogThis!Share to TwitterShare to FacebookShare to Pinterest
Labels: Baking and Cooking, Photography