Part four!  Today I will discuss a few weird things that happened to me last night.  Besides having trouble staying asleep (falling asleep, not so bad, but the bladder woke me up about three times.)  But besides that I woke the second or so time after a very disturbing/frightening dream:

I think I was headed home, and had almost made it inside when I heard the sound of a familiar bird.  I turned to look up into a very high tree (perhaps 200 feet or more), I was standing under an awning, which our house doesn't have, it extended out over a drive (sort of like a hotel drop off).  Up on top of this tree was the bird - and I recalled thinking that it was a Macaw as the sound was familiar.  So I called to it, hoping that perhaps it would fly down to me, and surprisingly it did.  It was bedraggled, feathers ragged, as it landed on my shoulder awkwardly.  It lost its balance and I cradled it in my arms thinking I needed to get it inside, get it some water, and then search up some food.  And of course I started thinking about what I really had inside my own house, like fruit, which I thought might do it some good.
I went inside the house, there was a step up to get into a kitchen, but the kitchen was laid out opposite (more like my Mom's house).  It was super bright, a huge window to my right and the sink underneath.  I caught a glimpse of Tenchi (my cat, as seen below:) 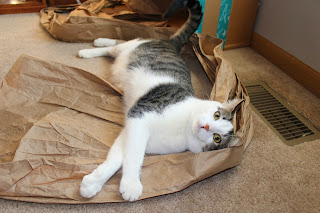 Of course, in this dream he was facing away from me and much fatter then he was in this picture (he was a lot younger here and probably 5 pounds lighter, so imagine his stripey back but very round).  He was pawing the ground with his left front foot, and I was a bit nervous about the macaw, but was also curious about what he was doing.

As I walked past him to his left side, I came around to see what he was doing.  At first I thought that he was doing his 'horny dance' as I call it since he does that to blankets a lot.  In the next second, I realized that he was rather pawing at the ground, at something laying there slightly to his right.  A split second later, I realized that object was a severed paw.  Just a paw.  And a second later, he looked up at me and I could see his front right leg was severed.  He seemed to ask, "why isn't it moving when I move my leg?"

In the moments, maybe milliseconds, of waking, I had a 'memory' of Aria having had her leg squeezed to the point of being drawn out (like dough when you pull it apart), and wondering how in the world they had both had their legs destroyed when there was no one in the house, or any circumstance that would do that damage.
It was very disturbing, and after I went to the bathroom I lay in bed trying desperately not to think about it.
Needless to say, I had to go downstairs to check and make sure that Tenchi's paws were all safely on his own legs.  They were, I'm happy to report, but it was still the strangest dream I've had in a long time.

I forgot about most of it while I was at work today.  I got to hide out doing my old job today (since one of my co-workers are out healing from carpal tunnel surgery) which was pretty darn peaceful overall.
I didn't get to play D&D today though, which is a bit sad, but it was also relaxing not to have to rush anywhere after work.  And then after work I did finally spray paint that vent (speaking of which, I need to get it finished and back upstairs).  And then I made my first attempt at a Texas Sheet Cake the first time in like a decade.  Hopefully it will taste good.  It at least looked normal when I finished it.  So, I guess we'll try!

So that completes my 4th entry.  I have a day off tomorrow so hopefully I'll be able to continue more things that make me happy!
Posted by Milly Thompson at 8:36 PM